The fortunes of the house of Wynnstay were established after the Civil War by Sir William Williams (1634-1700), descended from Cadrod Hardd, a tenth-century Lord of Anglesey. He was a successful lawyer and was elected Speaker of the House of Commons in 1680-81. As Solicitor General he prosecuted the Seven Bishops in June 1688 and, although he failed to gain a conviction, he received a baronetcy. He purchased the estate at Llanforda and through marriage joined it to Glascoed. It was Sir William Williams (1665-1740), the second baronet, who shaped the destiny of the family by gaining the prize of Wynnstay for his eldest son, Watkin. The route to Wynnstay was by way of a successful marriage alliance. The second baronet married Jane Thelwall (d. 1706); this brought him into family connection with Sir Watkins Williams Wynn (1628-1719) of Wynnstay, a member of the Gwydir family.

This family was descended from Owain Gwynedd (d.1169), Prince of North Wales, and through him from Rhodri Mawr, ‘the great’, King of Gwynedd, Powys, and Deheubarth (d.877).

Sir John Wynn of Wynnstay possessed many estates Rhiw Goch, Maenan, Eglwysfach, Glasinfryn – which came as part of the Gwydir patrimony. In addition, Sir John Wynn purchased the manor of Much Wenlock, and other land in Shropshire. The Wynnstay estate included the former estates of Valle Crucis Abbey, among which was the township of Wrexham Abbot – between a third and quarter of the whole town. These estates he left to Watkin Williams (1692- 1749), son of the second baronet, on condition that he took the surname of Wynn ‘and quarter my coat of arms in the first place’. In 1715 the young Watkin Williams married Ann Vaughan, coheiress of Edward Vaughan of Llangedwyn and Llwydiarth in Montgomeryshire and Glanllyn in Merioneth. The Vaughan family were descendants of the princes of Powys. Edward Vaughan died on 5 December 1718 and Sir John Wynn in January 1719. Watkin Williams Wynn came into possession of over a hundred thousand acres, chiefly in the counties of Denbigh, Montgomery and Merioneth. Luck, astute management and marriage alliance brought the Williams Wynn family from the comparative obscurity of an Anglesey rectory to make them leaders of the North Wales gentry.

Sir John Wynn was anxious to establish a definite link with Ruabon Church which he envisaged as a mortuary chapel for the house of Wynnstay. To this end he charged his heirs to erect a monument in the chancel of the church. The fortunate Watkin lost no time in carrying out the wishes of his benefactor. The Articles of Agreement dated 10 November 1719 between Watkin William Wynn of Wynnstay and Robert Wynne of Ruthin, Statuary, are for the erection, for a sum of £450, of three marble monuments. 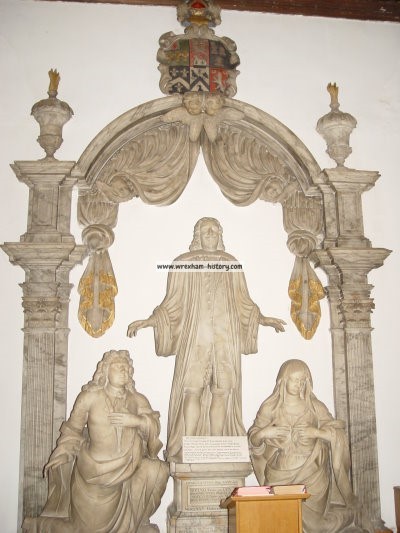 Thomas Pennant describes the memorial as ‘…a great monument of Henry Wynn, tenth son of old Sir John Wynn of Gwedyre, who died in 1671. His attitude is that of a fanatical preacher; and his dress a most unhappy subject for the sculptor …on one side kneels Sir John of Wynnstay and on the other Jane, his wife’. Philip Yorke of Erddig writing in 1799 calls it: ‘ a mass and massacre of marble, ludicrous to look on’.

Robert Wynne was born in Llanbedr about 1655. He was apprenticed to Peter Roberts, a member of the Worshipful Company of Masons of London. He returned to Ruthin by 1707 where he had a sculptor’s workshop, the ‘Elabatory’, as it was called, in Well Street. He died a pauper and is buried at Overton in Maelor.

Sir Watkin Williams Wynn was known as the ‘Great Sir Watkin’ by reason of his dominance of the gentry of North Wales, as a skilled parliamentarian, and his espousal of the Stuart Cause. His Jacobite sympathies led to the foundation of the Circle of the White Rose or Cycle Club, a dining club to promote their return. Sir Watkin’s first wife died childless in May 1748 and he lost no time in marrying Frances Shakerley in July. Two children were born, the eldest Watkin in April 1749 and William in April 1750 (d.1763). Sir Watkin’s death whilst hunting near Acton, Wrexham, coincided with a Methodist prayer meeting at which the petition was made -‘0 Arglwydd cwympa Ddiawl Mawr y Wynnstay’ (0 Lord, cast down the Great Devil of Wynnstay). His death took place on 26 September 1749.

Parts of the grounds were landscaped by Capability Brown and the park was regarded as one of the largest and most important in Wales, containing several important monuments; a column by James Wyatt, erected in 1790 as a memorial to the fourth baronet; the Nant y Belan Tower and the Waterloo Tower.

To the right of the Rysbrack monument is a plaque to the memory of Sir Henry W. W. Wynn., KVB., GCH., d.1856 and Frances, his wife, d.1854. He was the youngest son of the fourth baronet and had a successful career in the foreign service as ambassador in Gascony, Switzerland and Copenhagen

The chief concern of the seventh baronet (1885-1944), Sir Herbert Lloyd Watkin Williams Wynn, was the maintenance of his estates. The huge mansion of Wynnstay could not be serviced owing to the decline of domestic service and the economic and social changes brought about by two wars. During the 1914-18 War, Sir Watkin established a munitions factory at Wynnstay and took part in the manufacture of shells. The seventh baronet died on 24 May 1944 and a Reading Desk (the vicar’s Stall) which exhibits the Wynnstay arms is placed in his memory. He was succeeded as eighth baronet by his son, Watkin, who died on 9 May 1949. Before his death the decision had been made to sell Wynnstay. The family retain Llangedwyn and Cefn St Asaph as their country residences.

A brass set of altar cross and candlesticks are inscribed ‘To the Glory of God and in loving memory of my husband Watkin Williams Wynn, 8th Baronet 1891-1949, and of Watkin, our dearly loved only son, 1925-1946. ‘Love never faileth’

Owing to heavy death duties, the Williams-Wynn’s moved from Wynnstay to nearby Plas Belan, a house in the estate grounds, and finally left Ruabon for ever in 1948, severing a link with Ruabon of over two centuries.

Much of the estate was put up for sale and the house became a private school, Lindisfarne. The school itself closed in bankruptcy in 1994 and the house was converted into luxury apartments.

The organ at Wynnstay was built by Snetzler in 1774 for Sir Watkin Williams-Wynn’s London home in St James’s Square but was moved to Wynnstay in 1863.

During the sale of Wynnstay and its contents, the organ, and many other treasures, were acquired for the nation and are now displayed at the National Museum in Cardiff. 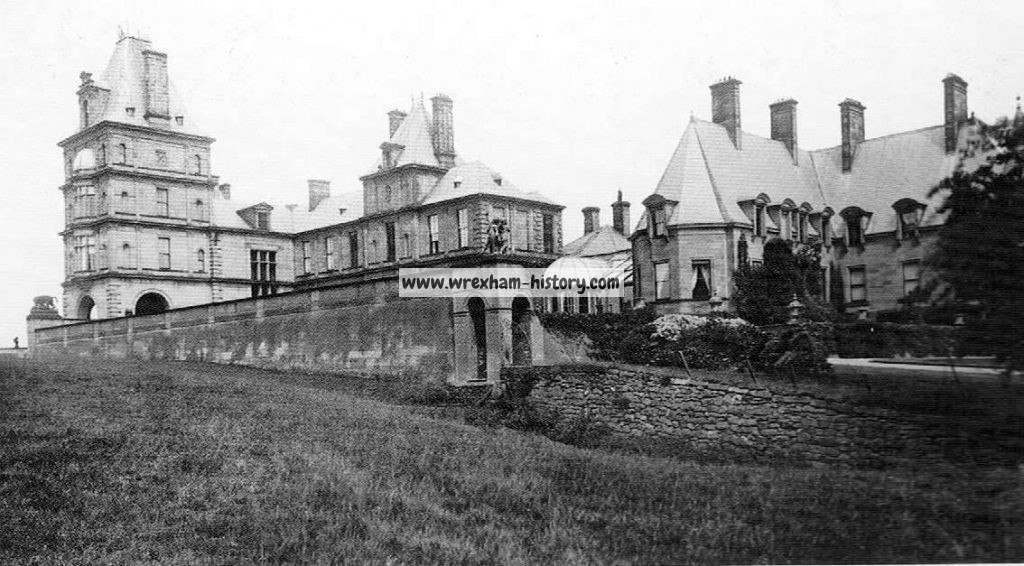 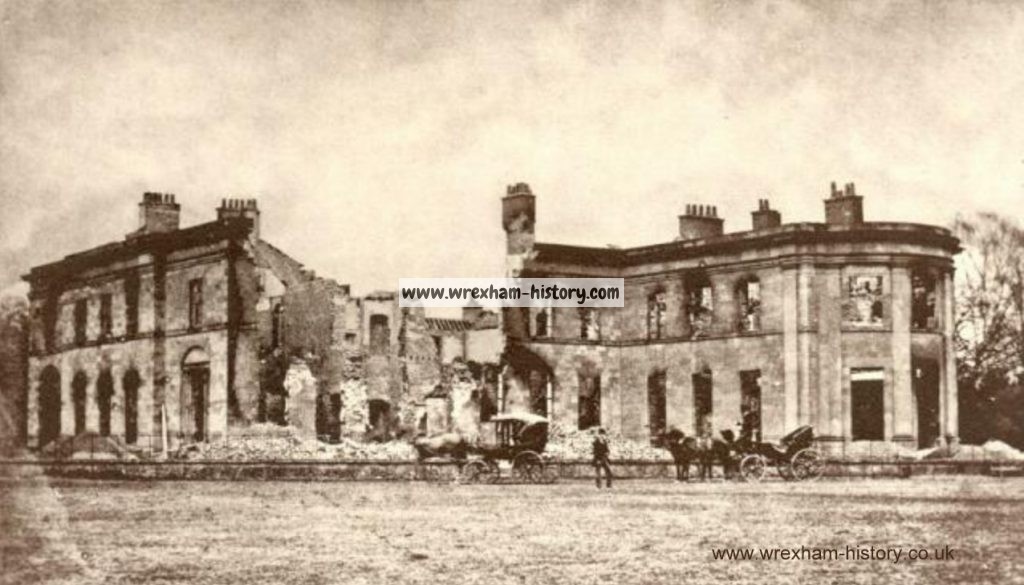 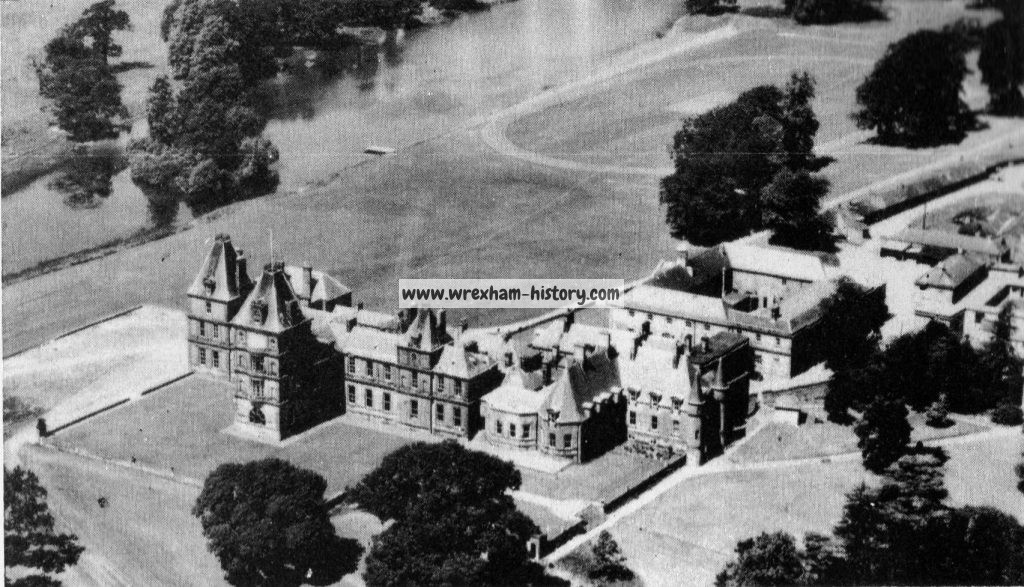 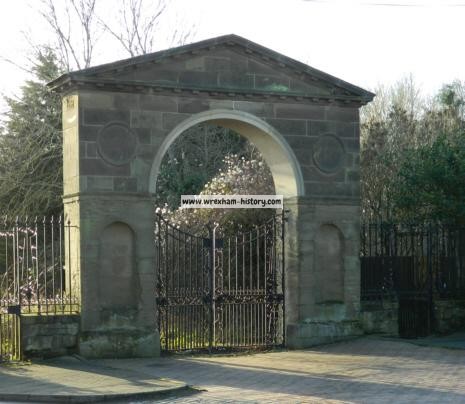 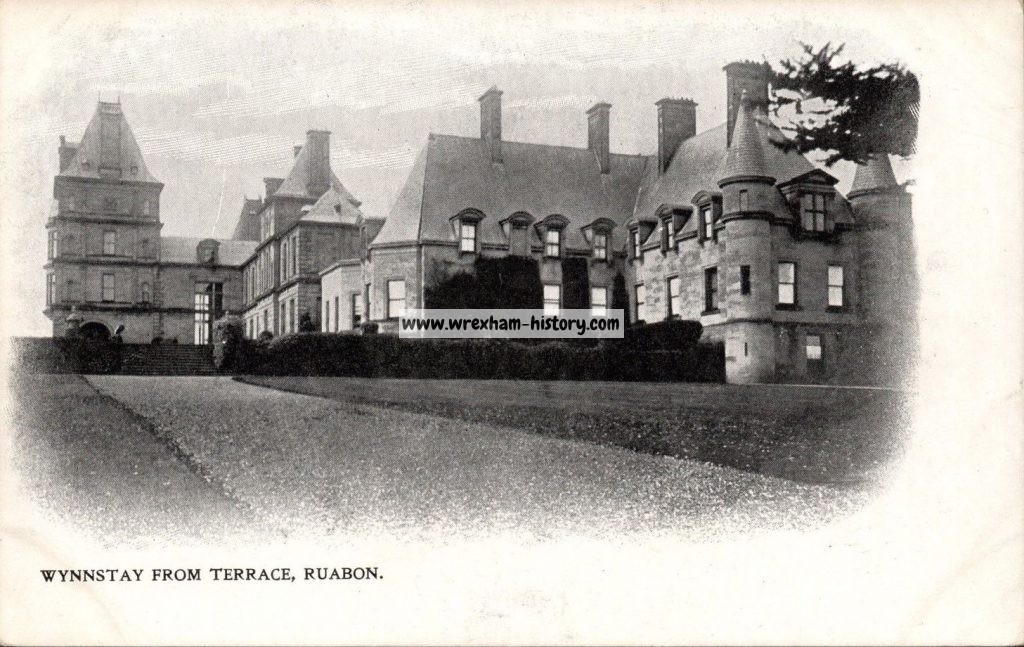 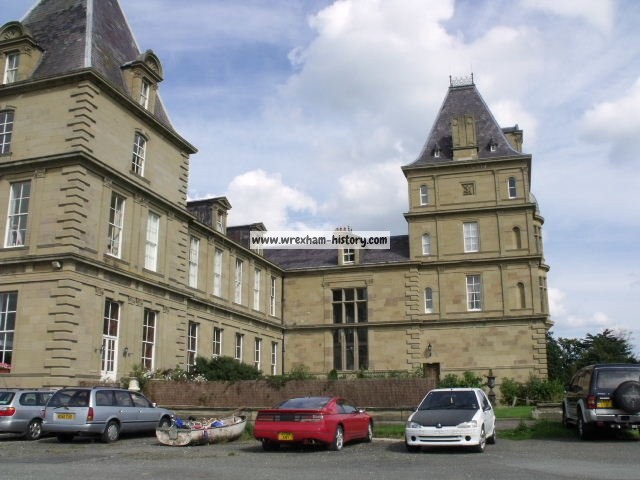 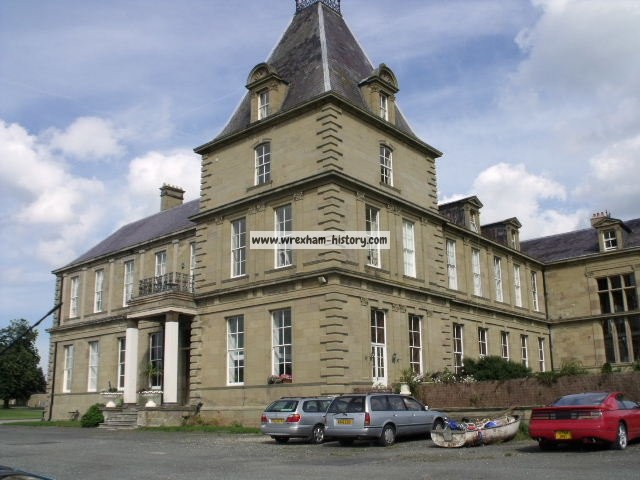 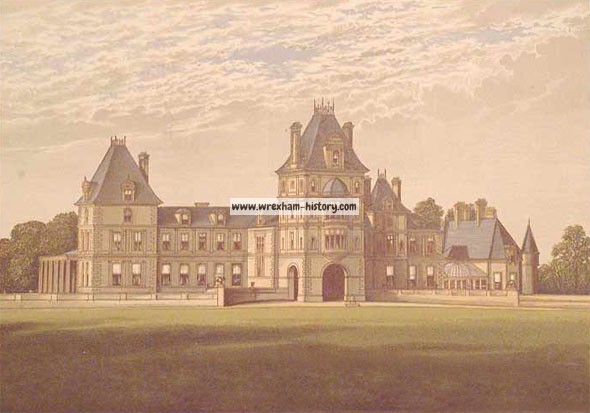 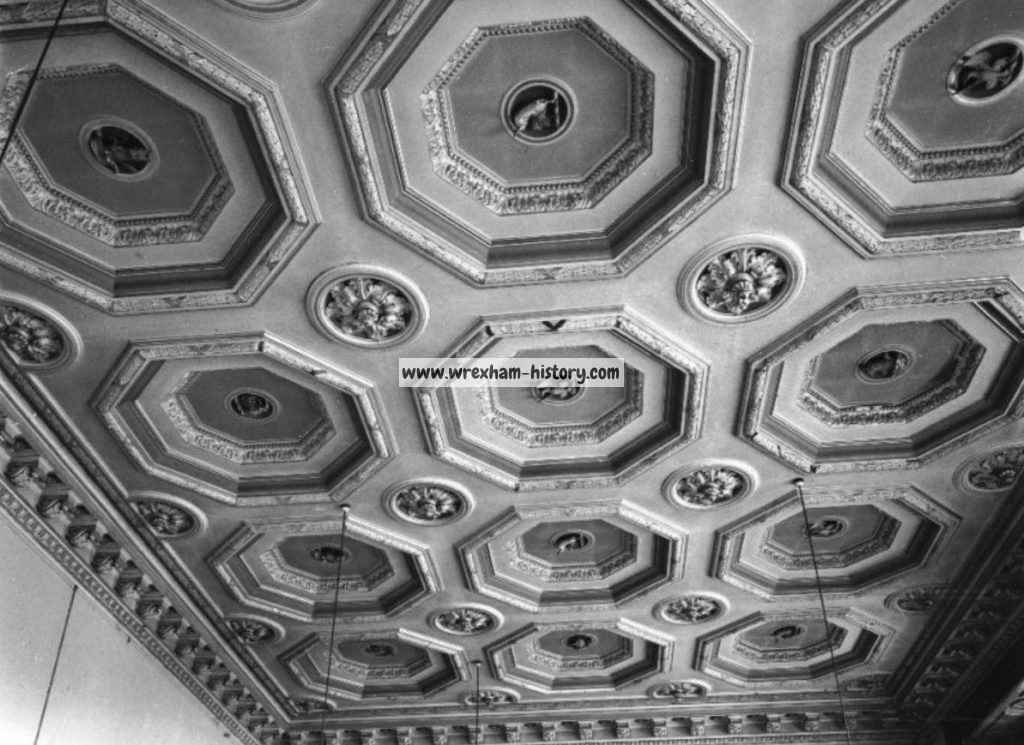 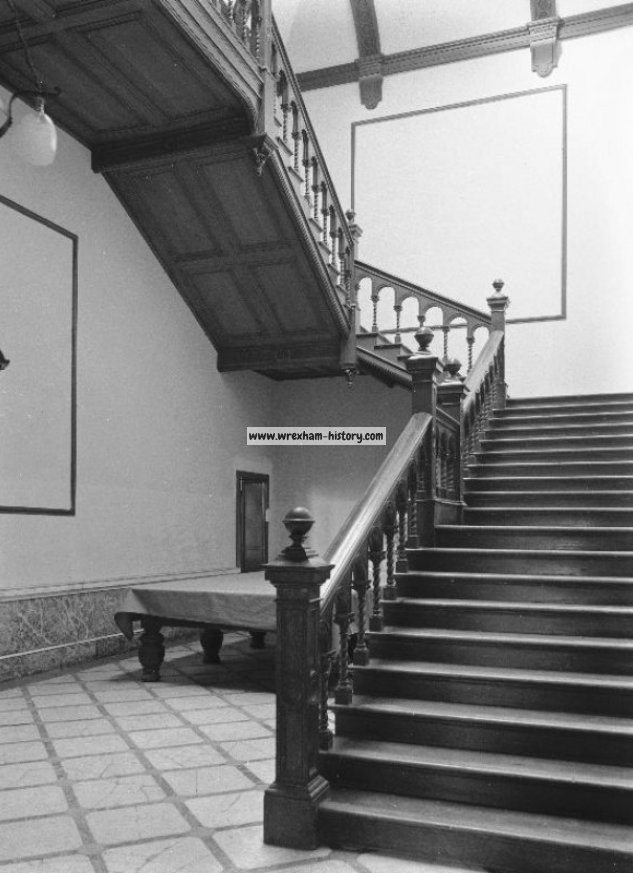 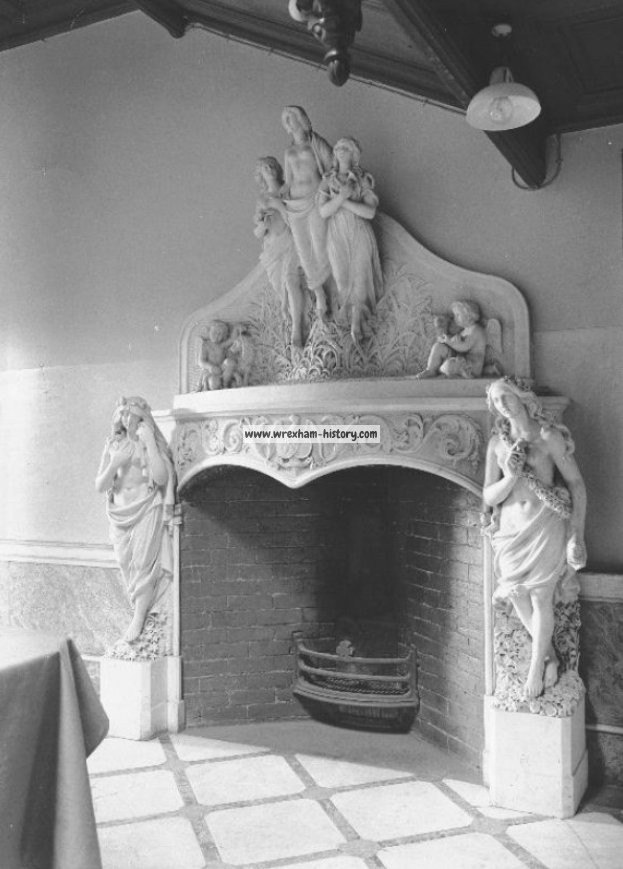 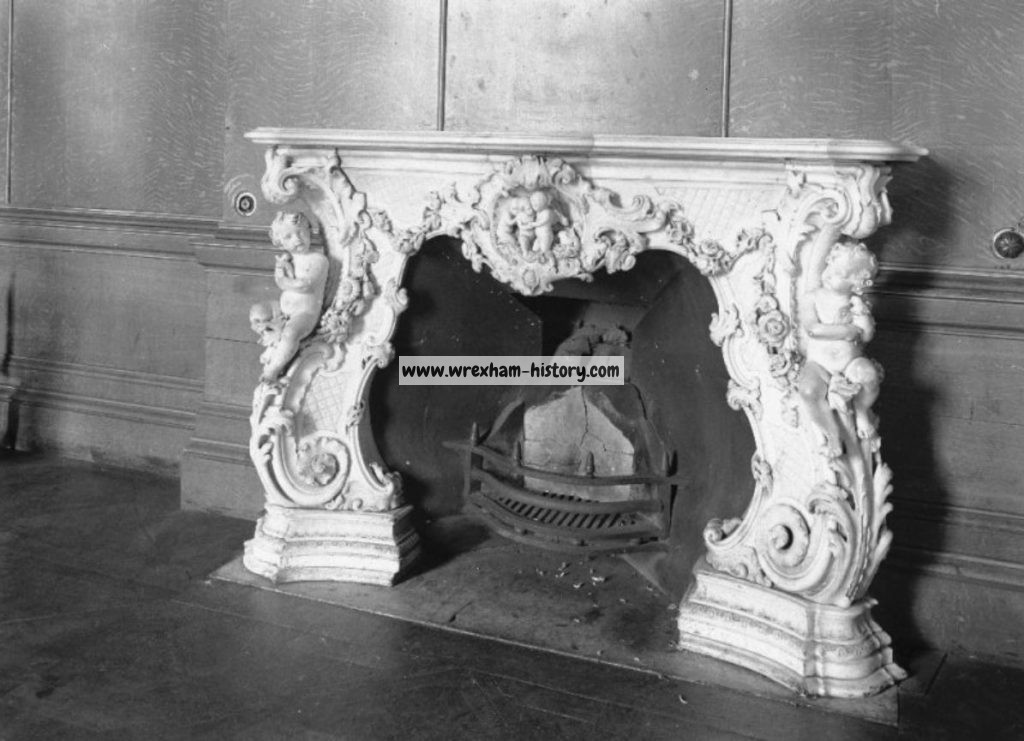 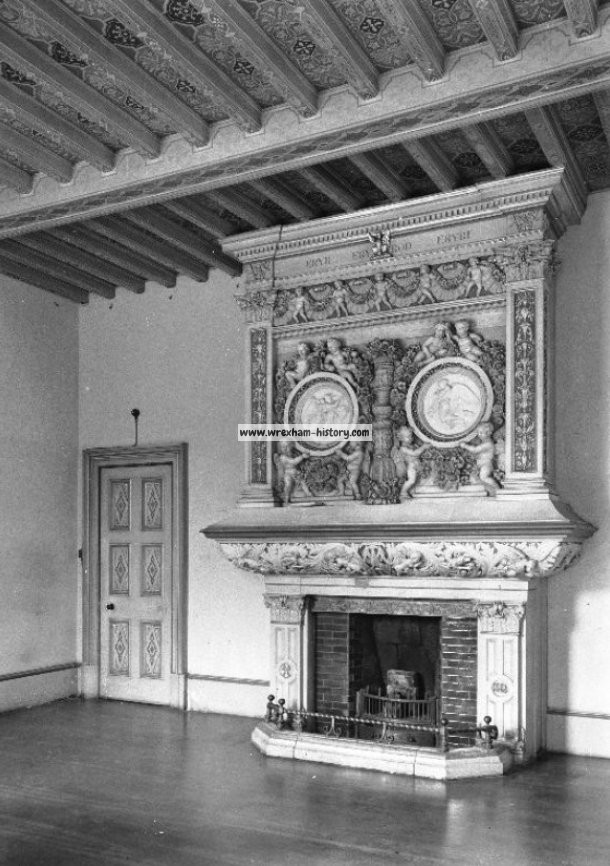 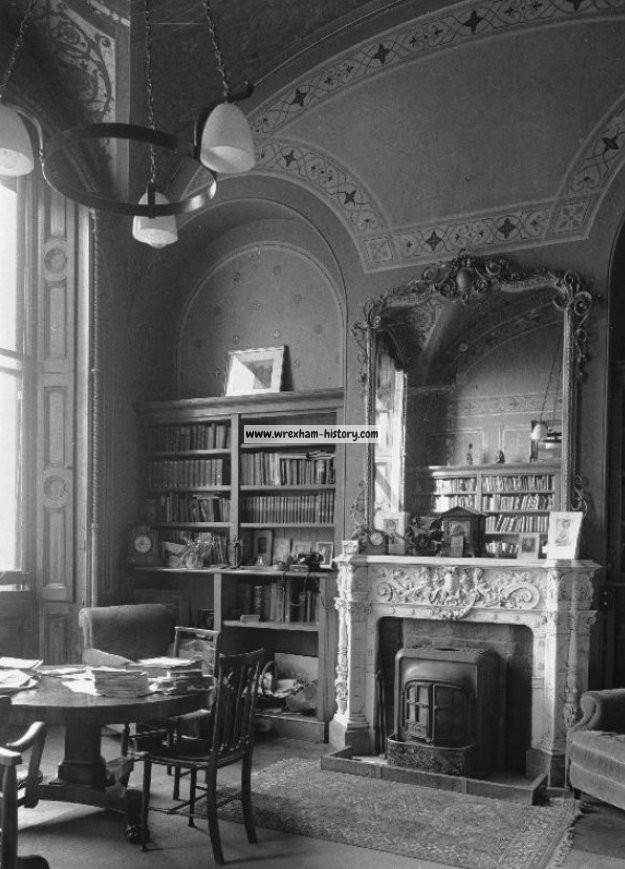 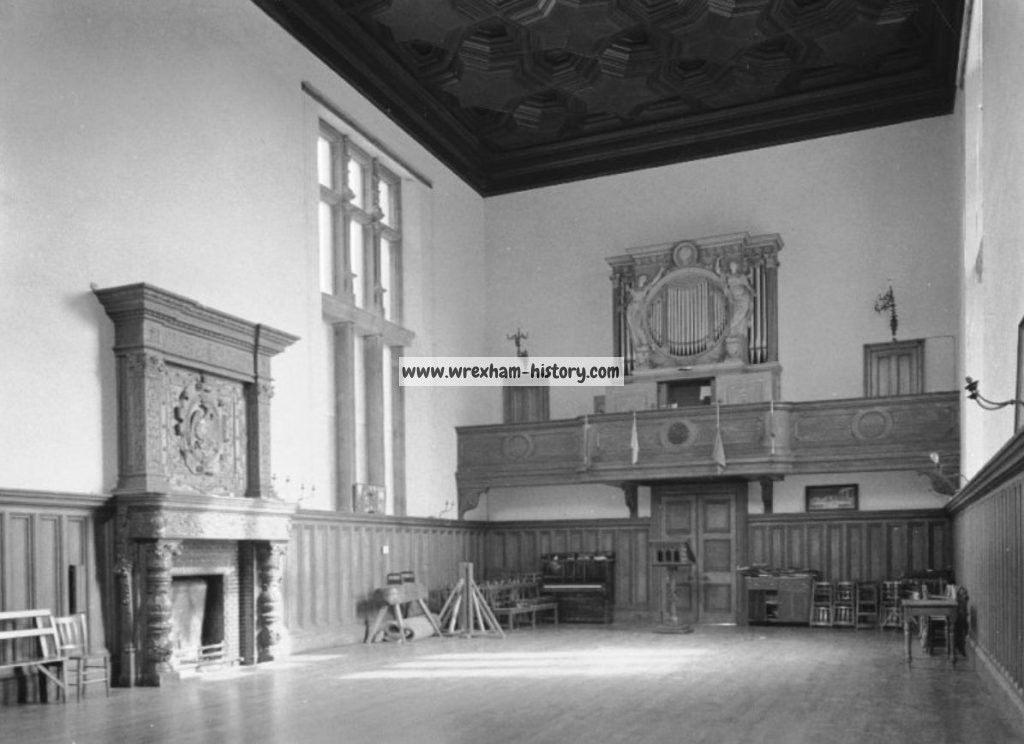 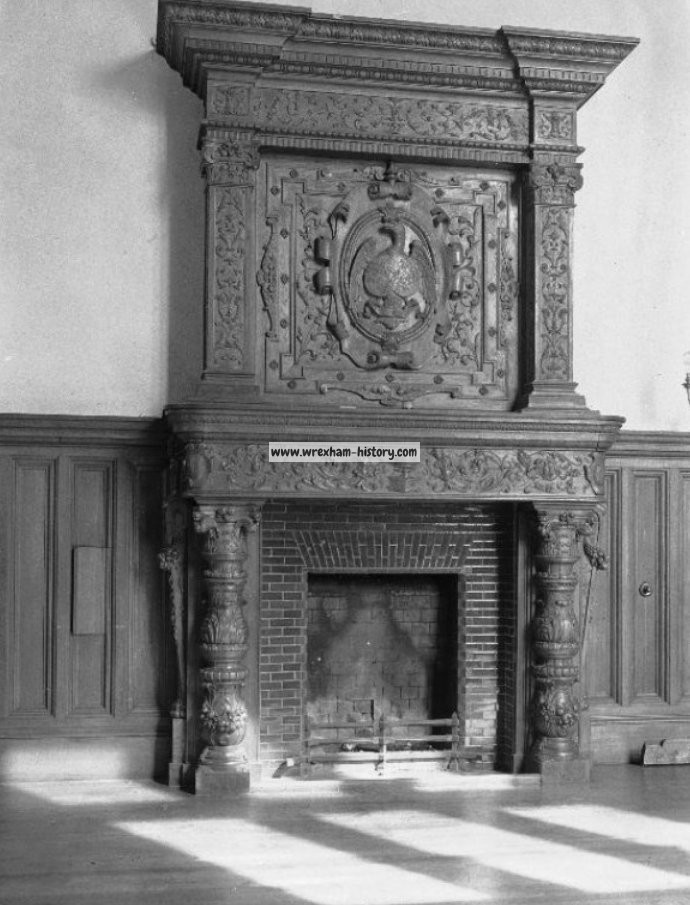 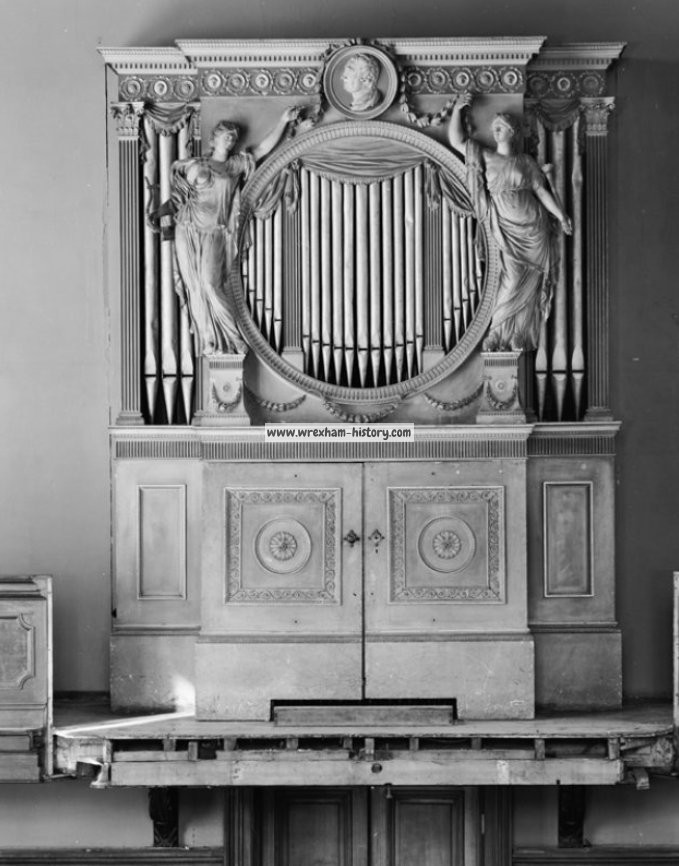 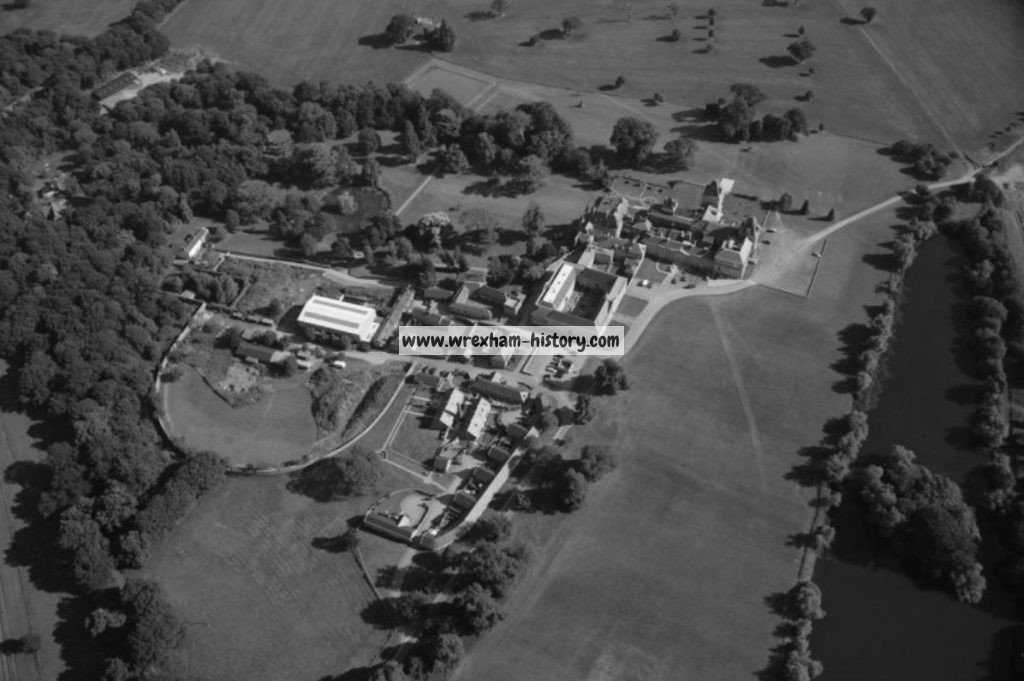 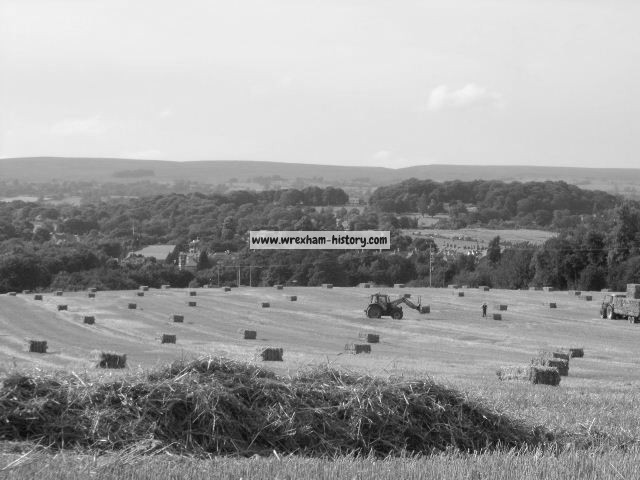 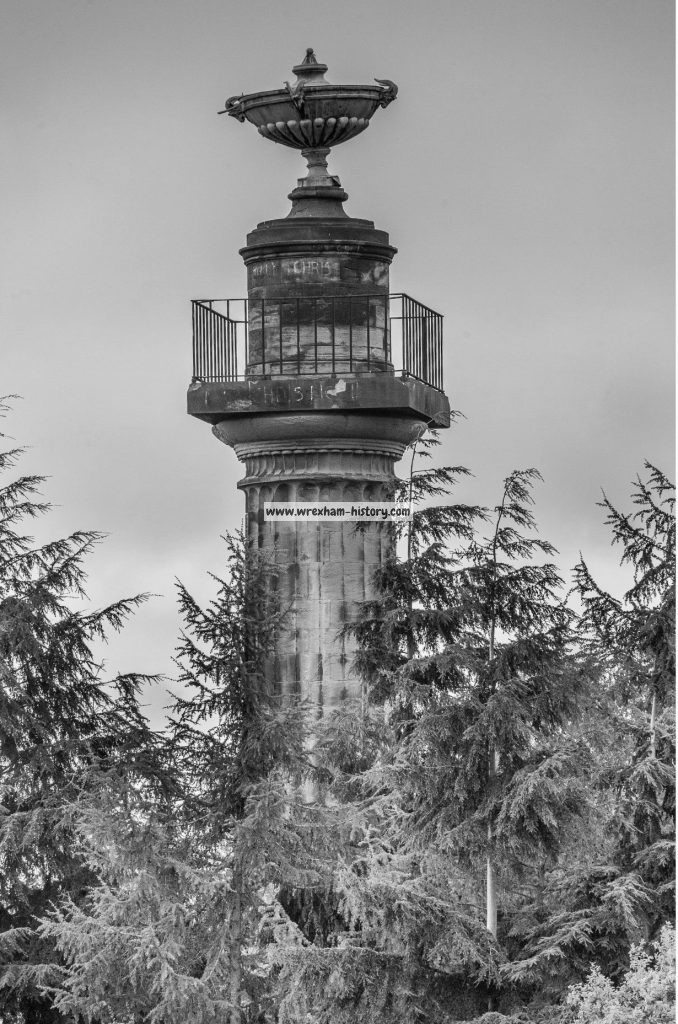 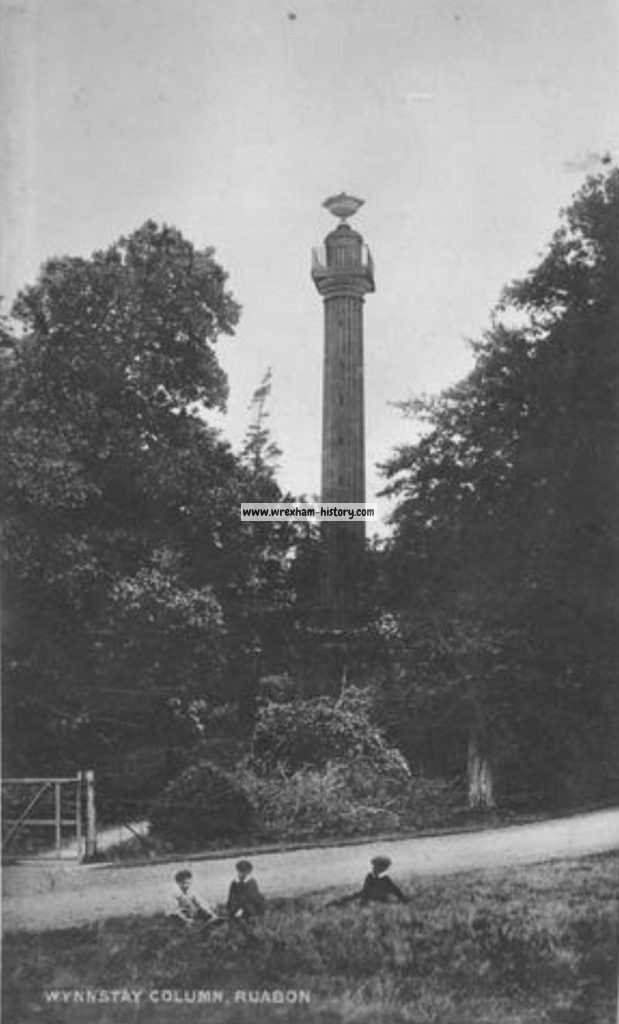 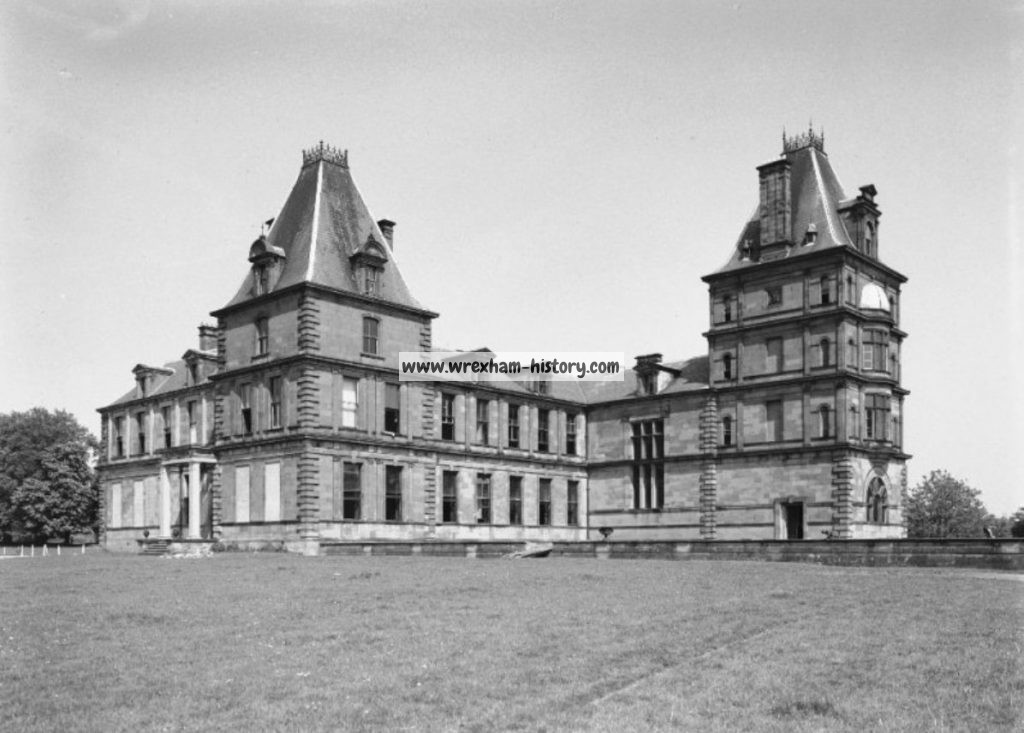 The Round House, Ruabon

Built in the late 1700s the circular structure was used as the parish lock-up. It’s construction includes squared pecked sandstone blocks, ashlar cornice and domed roof with central lipped opening in the dome. The small [more]

Private Davenport, ready to leave for the Frontline 1914. A Ruabon resident pictured on Bridge Street. Just visible is The Vaults and the Roundhouse. Total Page Visits: 8232 – Today Page Visits: 2