Wrexham Poor Law Union was formed on 30th March 1837. Its operation was overseen by an elected Board of Guardians. Wrexham Union workhouse was built in 1838 at a site to the west of Wrexham town centre. The Poor Law Commissioners authorised an expenditure of £6,525 on construction of the building which was intended to accommodate 400 inmates. The workhouse design followed the popular cruciform or “square” layout with separate accommodation wings for the different classes of inmate (male/female, infirm/able-bodied etc.) radiating from a central hub.

In 1842, it was reported that 42 out of 49 single mothers in the Wrexham workhouse were there because of the prevailing practice of allowing young men to pay night-time visits to female servants in agricultural areas of the union. The news clearly alarmed the board of guardians at nearby Congleton who instigated a campaign to ban such visits within its area, even producing a printed form of agreement to support the scheme. From January 1857 until July 1863, the Master of the Wrexham workhouse was William Bragger.

In 1894, the British Medical Journal set up a “commission” to investigate conditions in provincial workhouses and their infirmaries. Following a visit to Wrexham, the commission’s report revealed that “the tone and management of this house impressed us very favourably; the officers seemed to regard their charges as human beings to be cared and planned for.” Nevertheless, some improvements were recommended. These included an increased staff of nurses for the sick, the employment of a night nurse, and an end to the use of pauper help in the actual nursing. Better separation of the infants from the adults was also suggested, together with the provision of special accommodation for them when sick, and of a paid official to take care of them.

By 1900, a large infirmary had been erected at the west of the main workhouse building, with a fever hospital to its west. A separate chapel was added at the north-east of the main building.

In the 1930s, the site became Plas Maelor Public Assistance Institution and most of the old workhouse buildings were demolished. The site later became Maelor General Hospital, and now Wrexham Maelor Hospital. 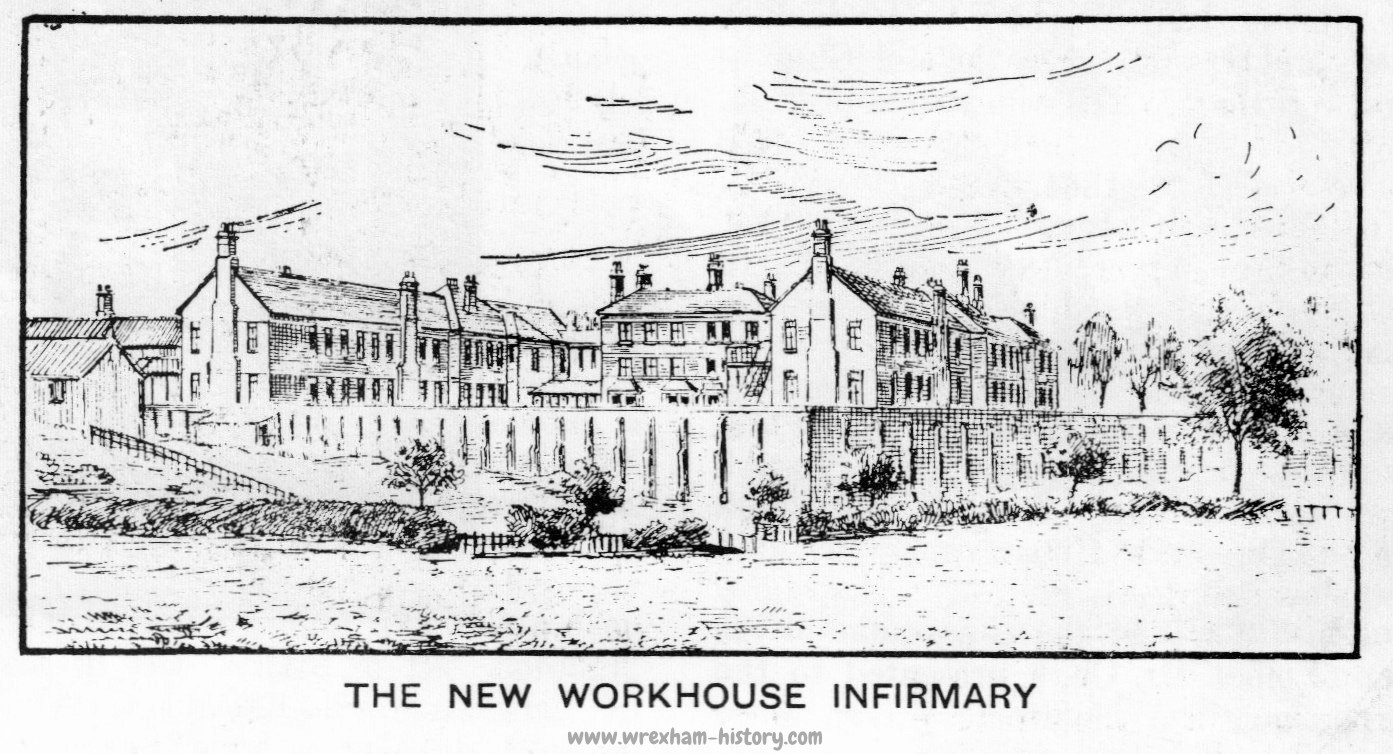 One shilling and two pence half penny was found on Mary Ann Mitchell on her admission. (To be retained by Master.)

The Master begs to report overcrowding in the Men’s sick wards.

Seven shillings and eight pence three farthings was found on John Jones after his admission to the house. (To be retained by Master.)

Annie Flanaghan, having been in service with Mrs Randles, Trevalyn, Rossett, since September, applies for an outfit. £2 1s box (allowed).

The produce of the farm for the month ending 7th Dec. was as follows:

The Master and the Matron will be glad to welcome any Guardians on Boxing Day when the inmates will have their Christmas dinner.

The Inmates desire the Master to convey their thanks to the Guardians for their excellent Christmas dinner and for the presents of tea, sugar and tobacco on Boxing and New year’s Day.

The Mayor and Mayoress of Wrexham presented Christmas cards, oranges and a toy to each child in the schools on Christmas Day. They will also be glad to provide a knife and fork tea, and entertainment for the whole of the inmates, if the board approve (Allowed).

The Ladies of the Brabazon Employment Scheme entertained the Workers to a very substantial tea, and presented them suitable gifts. Also provided the whole of the inmates with a magic lantern entertainment on Friday last.

Henry Collins, a vagrant, was sentenced to 14 days’ hard labour on Monday last, for refusing to break stones.

The Master begs to acknowledge presents of tea, sugar, tobacco, buns and oranges for the inmates generally from the Revd. Powell and Miss Maude Jones and friends.

Annie Flanaghan first appears in the Workhouse records on October 23rd, 1892 when she was recorded in the arrivals register, aged 8, accompanied by her brother George, aged 3, and younger sister, Kate, an infant. They are described as ‘destitute and deserted.’

One of the cows calved. April 3rd.

The Master regrets to report that Thomas Hughes, aged 53 years, committed suicide May 15th, by jumping from the Top Room of the Men’s Sick wards. An inquest was held and the finding of the jury was that he was temporarily insane at the time.

Mr Yorke invites the inmates to Erddig, if the Board approves. (Approved).

William Henry Jenkins, a schoolboy, has absconded twice since the last meeting of the Board.

William Henry Jenkins has twice absconded, since the last meeting of the Board. (Enquiries to Industrial school).

John Kelly, an inmate, was sentenced to 7 days hard labour, July 24th, for refusing to do the work allotted to him.

The produce from the farm for the past month was as follows:

The Master regrets to report an outbreak of typhoid fever at the schools. One of the girls, Eliza Jane Lacey, aged 13 years, has been removed to the Fever Hospital. The rooms etc have been thoroughly disinfected.

Mabel Price, aged 10 years, has been removed to the Fever Hospital suffering from typhoid fever.

Sarah Micklewright wishes to the Board to ask for clothes to leave the workhouse. (Refused. Master to inform the applicant).

Two boys having absconded from the schools were brought back 3.30 this morning.

Mrs Loftus applies for the clothes of Cath Jones, deceased.

The sum of four pounds one shilling and six pence was found on Emma Jones on her admission. (£2 allowed for clothing for her son).

Mary Higgins wishes to appear before the Board to ask for boots to leave the House. (Boots refused).

William Parry sentence to 14 days hard labour on Monday last for absconding from the house.

(Allowed by the Board)

The Master wishes to acknowledge with thanks a large rocking horse for the children, from Miss Maude Jones, Regis Place, Wrexham.

This drawing is by an artist in training at Wrexham Art College in 1971, this was kindly supplied by Margaret Hayes of Wrexham, who in 1971 paid £20 for two original prints from the then [more]

The story of the Lowe family who came from Yorkshire and through their descendants eventually ended up in Wrexham. William Lowe was born in Sheffield about 1820 and in 1840 he married Mary Piercy at [more]