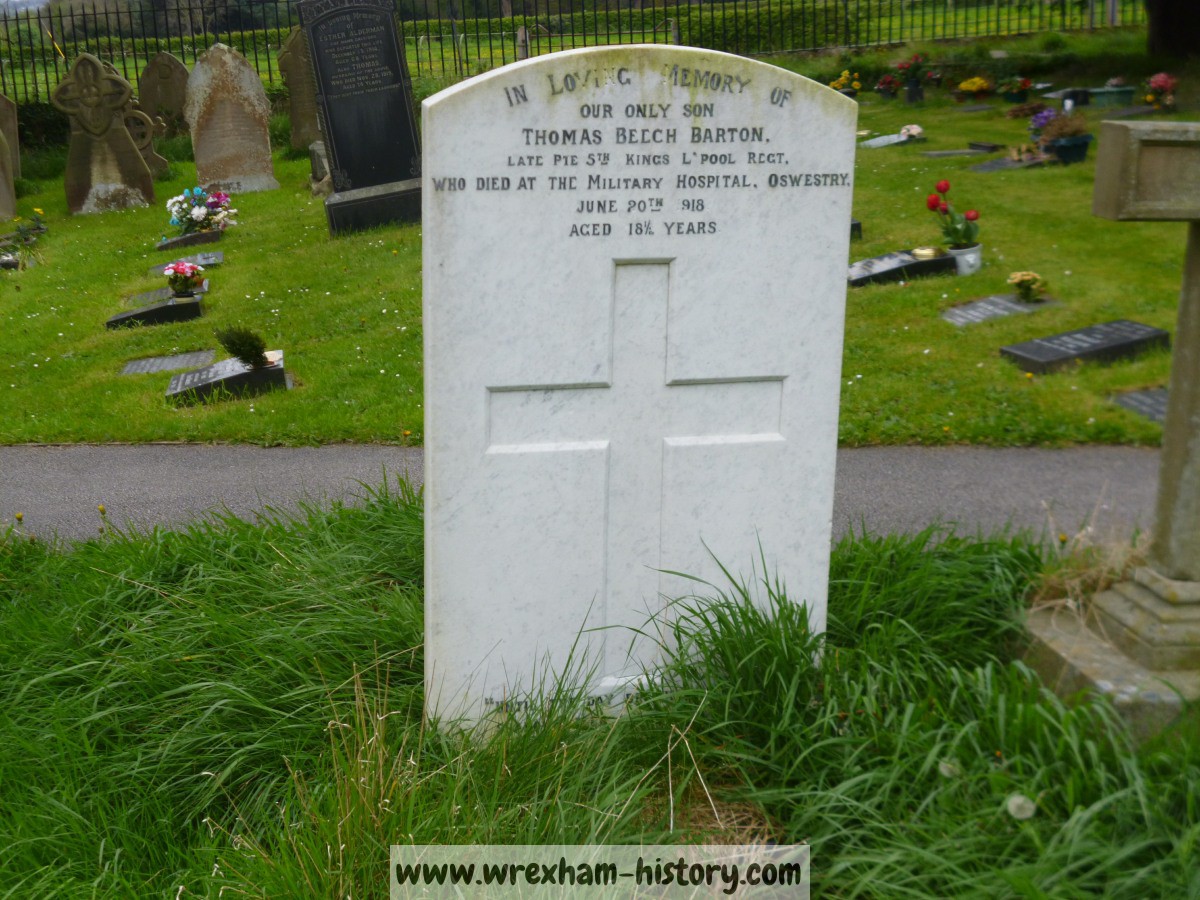 Thomas Beech Barton was born in the March quarter of 1900, the only son of Thomas Beech Barton to his 2nd wife Kate E. Barton, (nee Jones) who Thomas senior married in St Clements Church, Broughton, Salford in 1899 (Salford C39/2/433).    Sadly his first wife Jane Elizabeth Barton (nee Lewis) had died in 1897, age 57 (Wrexham, Vol.  11b, Page 187) and with whom Thomas senior had had at least 3 daughters, all grown up and probably married at the time of his 2nd marriage.   His first family had lived in the Wrexham area for roughly 20 years as they are on 2 Censuses, 1818 and 1891.

By the 1901 census Thomas Senior and his new wife were living at 3, Grove Park (3 houses down from the Stables, probably of Roseheath School, which was a Boarding school) Wrexham, Denbighshire.   Thomas Beech Barton, Senior was now 56 years old and a Coal Proprietor (Mine Man?) and Employer who had been born in Leek, although he changes his place of birth many times on the censuses, but always in Staffordshire.    His new wife Kate Elizabeth, 33 had been born in Salford, Lancashire.   Also in the household was Kate’s sister, Ada M.,38 and single had been born in Waverton, Lancashire.    There was a Nurse/Housemaid and a General servant living at the house as well as the baby Thomas Beech Barton, age 1.

There is no sign of Thomas Beech Barton, Junior on the 1911 census of the family living at Willoughbridge Wells, Market Drayton, Ashley & Mucklestone, Shropshire (15 Rooms).   Thomas Beech Barton, Senior , 66, was still a Colliery Proprietor and Employer, he tells us that he had been married 12 years and this time he had been born in Cheddleton, Staffordshire.    His wife Kate. E., 43, tells us that 1 child had been born and was still living.   There was a visitor in the household, Samuel Sothern, 55, married and an Iron Buildings Fence Contractor (Employer) born Liverpool, Lancs.

I am assuming that Thomas was at a private boarding school somewhere, but unfortunately I cannot find him on the 1911 census.

Sometime between the 1911 census and 1918 the family must have come to live at Burton Lodge, Gresford as the Roll of Honour shows in the Llangollen Advertiser, Friday 28th June 1918.

The death took place at Park Hall Military Hospital, Oswestry on Thursday of Pte. BARTON, Junr. son of Mr. T. BARTON, now of Burton Lodge, Gresford, late of Congleton, and formerly of Plasynllwyn, Wrexham.    Pte. BARTON died from bronchial pneumonia.   The funeral took place at Gresford Church on Monday.   Many expressions of sympathy and condolence were received from his late officers, and the hospital staff.    When living at Wrexham, Pte. BARTON’s father was well-known in colliery circles as managing director of the Brynmally Colliery Co. Lt.

In any case Thomas Beech Barton, Junior was to enlist in the Army as Ancestry.co.uk record :-

Thomas Beech Barton in the UK, Soldiers Died in the Great War, 1914-1919, where his birthplace was given as Congleton, Cheshire, but I cannot find his Attestation papers to see exactly what was written, it also states that his residence was also Congleton and he enlisted in Chester.    It also confirms what is recorded on the Commonwealth War Graves database.   It states that his Theatre of War was here in Britain and sadly he was probably caught up in the Spanish Flu epidemic which was rife in 1918.   He was to succumb to pneumonia on the 20th June 1918 at the Military Hospital in Oswestry.

Thomas Beach Barton in the UK, Army Registers of Soldiers’ Effects, 1901-1929 tell us that his sole Legatee was his father Thomas B. Who was paid £5 4s 10d on the 21st September 1918.    A War Gratuity was not admissible as he had not served abroad.

Thomas Beech Barton is buried in the All Saints Churchyard, Gresford, Wrexham, Wales and thanks to Stan Murphy we have a photograph of the gravestone.

of our only son

who died at the Military Hospital Oswestry

‘Until the day break and the shadows flee away’ 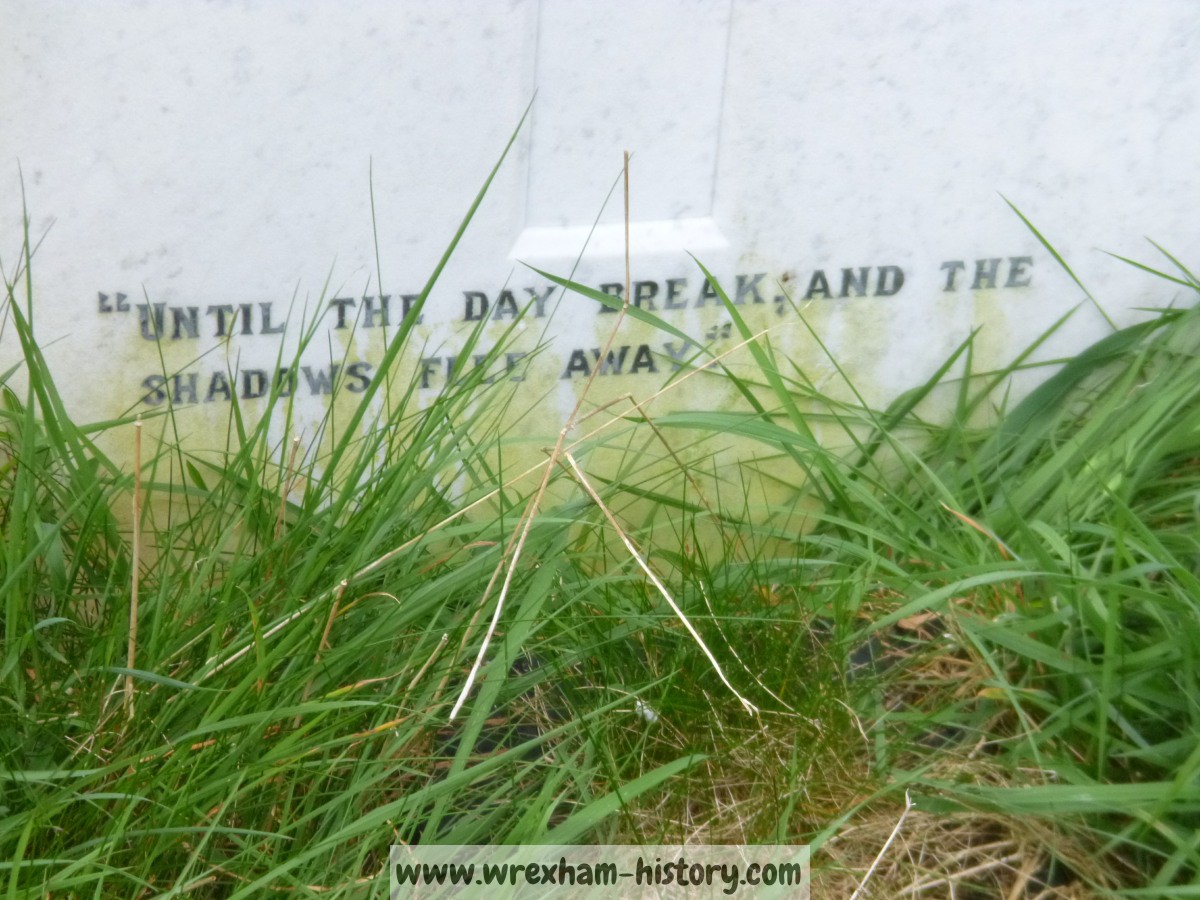 The Leader – October 2017 A memorial built to commemorate those who made the ultimate sacrifice during the First World War has been unveiled. The memorial garden at Bellevue Park in Wrexham was officially opened [more]

Mistakes all round with this soldier – His name on Army Docs. is John H. also on the Gresford Roll of Honour and on the Bangor Memorial Arch he is V.W. MILLINGTON, but in reality, [more] [more]