Cars now flow along Wrexham’s roads but once the sound on the streets was the rattle of the trams.

The Story of the Tram

The tram is more than a vehicle — it represents a solution to transport problems… The tram was the first vehicle to provide cheap urban transport for the masses. On its arrival in Britain (from the United States) in 1860, it was welcomed as a means of transport that gave a far smoother ride than the previous horse-drawn bus. The track on which the trams journeyed was found to be much less bumpy and rutted than the road surfaces of the day!

When electric trams arrived, in the 1890s, it was the wonder of the age. It looked unstoppable, its fastest and only competition being a galloping horse. By the 1920s there were 14,000 electric trams in Britain alone.

Then came the decline… World War I changed many things. Among these changes was the emergence of the internal combustion engine — its efficiency developed, providing greater scope for the use of such vehicles. The ‘new’ engines offered reliability, efficiency, and perceived low costs. Buses so equipped could operate with far more flexibility than trams — they were not restricted by the need for rails, but it took many more years before buses became swifter and carried more passengers than trams.

Private and public transport exploded, offering more choice of how to travel, and even where to live. As a result, new suburbs needed servicing by the provision of new transport routes.

Few towns invested in new tramways and cheaper buses took over. The intensive use, destruction and lack of investment during the war years were the last straws and only a handful of tramways survived into the 1950s. Eventually only Blackpool was left. It was only much later, in the 1990s, that Britain recognised the potential of modern tramways and new systems opened in Manchester, Sheffield, Birmingham, Croydon and Nottingham.

Wrexham and District Electric Tramways operated an electric tramway service in Wrexham between 1903 and 1927.

In October 1876 a single line operated between New Inn Johnstown to the toll bar on the outskirts of Wrexham. On 1 November 1876 this toll bar was removed, and the line was extended to the town centre.

Wrexham and District Electric Tramways, a company set up by the British Electric Traction group, acquired the company in 1900. They converted the line to 3’6″ gauge and electrified it. The work was carried out by Dick, Kerr & Co. following an inspection by Lt Col. Sir Horatio Arthur Yorke, from the Board of Trade, services started on 4 April 1903.

A new depot was provided at Johnstown, at the corner of Offa Street and Maelor Road, constructed by Jenkins & Jones of Johnstown of Ruabon brick. The depot survived long after the closure of the tramway, one subsequent use being a bus garage for the Crosville Company. It was finally demolished sometime between 2005 and 2010.

Electricity at 550V was obtained from the Wrexham Corporation power station in Willow Road. A 21 year agreement was put in place at the opening of the tramway for the rates at which the company would be charged for its use of power. Drivers were encouraged to operate economic driving practices to minimise the expense to the company. When this agreement expired, the company was forced into an annual contract with the prospect of yearly increases in the unit charge.

The service was extended on 26 May 1903 past Wrexham GWR railway station to the Turf Hotel. From Johnstown the line was taken into the new development at the west of the Wrexham-Ruabon road, reaching Duke Street, Rhosllannerchrugog by the end of 1904.

Two routes were planned but only one was ever opened, a second route along Yorke Street was never installed.

In 1912 the company started experimenting with bus operation, and soon realised that this was where most of the profits were going to be made. In recognition of this in 1914 the company changed its name to Wrexham and District Transport Company Limited. However, any plans for expansion of bus services were put on hold with the outbreak of the First World War in the same year, and the motorbuses that the company had acquired were requisitioned by the armed forces.

After the war, the company suffered from competition as the military authorities disposed of much surplus equipment including motorbuses, and Wrexham Council issued hackney licences freely to anyone requesting them.

There were 10 tramcars built by Brush Electrical Engineering Company of Loughborough. The livery was red and cream. The vehicles could seat 26 on the upper deck, and 20 inside on the lower deck. 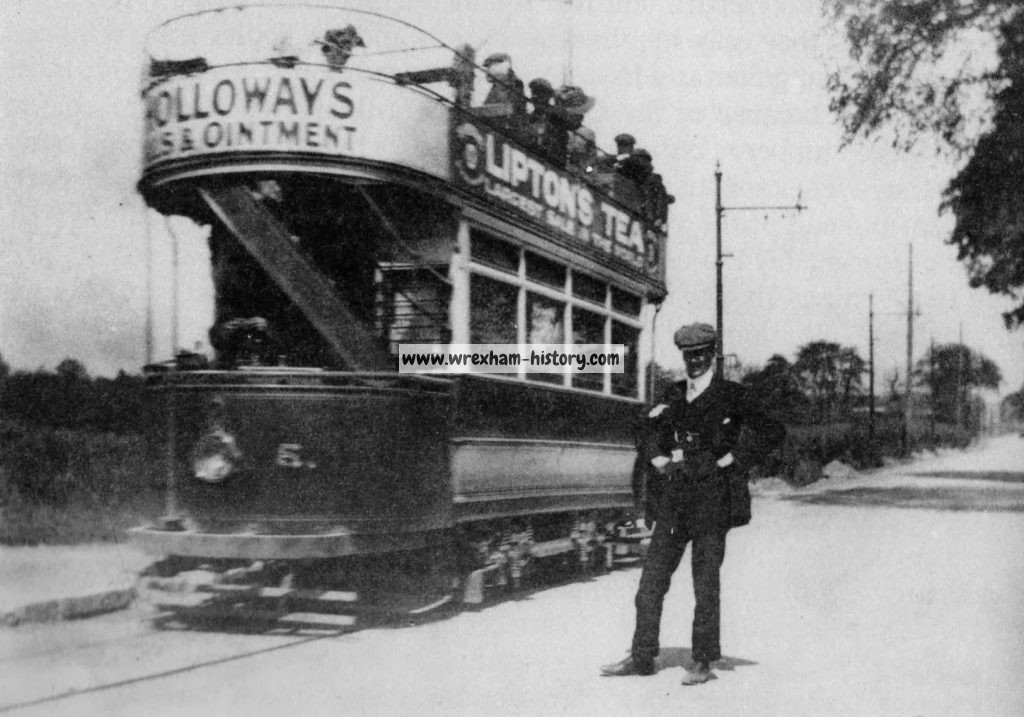 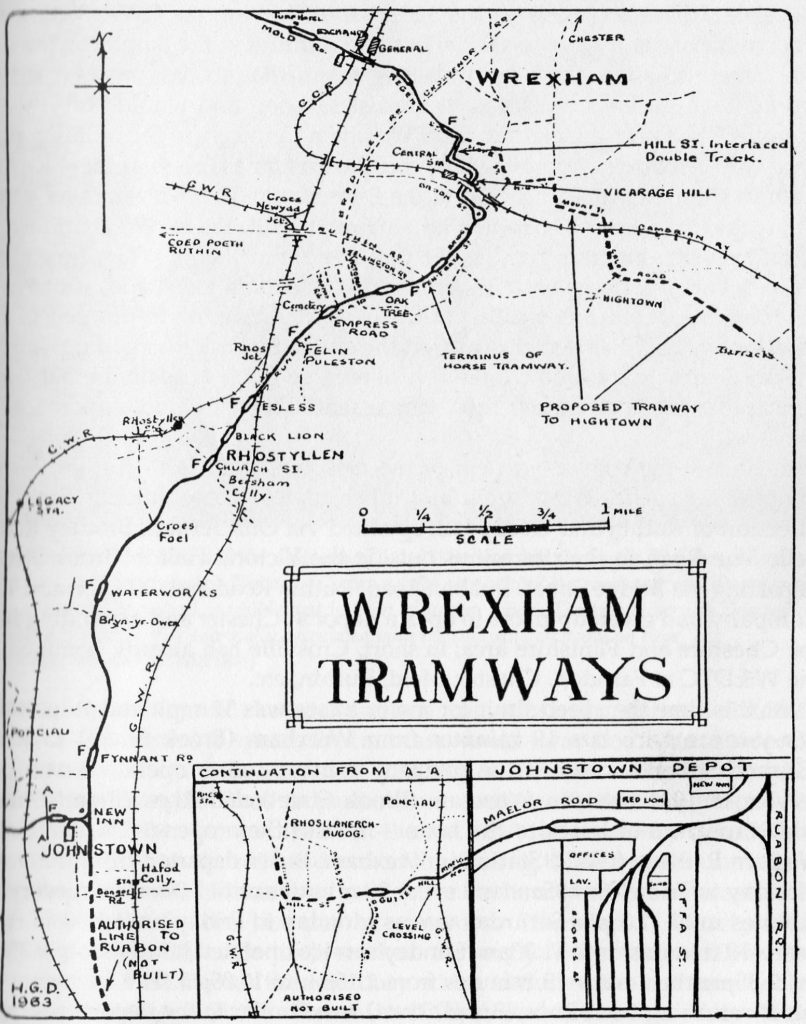 In 2005 Wrexham Museum had just acquired two of the town’s original electric trams, which came into use in 1903 to replace the horse-drawn variety. Vic Cleveley discovered the tram bodies at the Brow Golf Club in Ellesmere, Shropshire. The owner Alf Strange had bought them in 1970 with a view to restoring them himself. But no work was carried out and one tram is now in a very bad state while the other seems to have been used as a shed for the golf clubs grounds men. 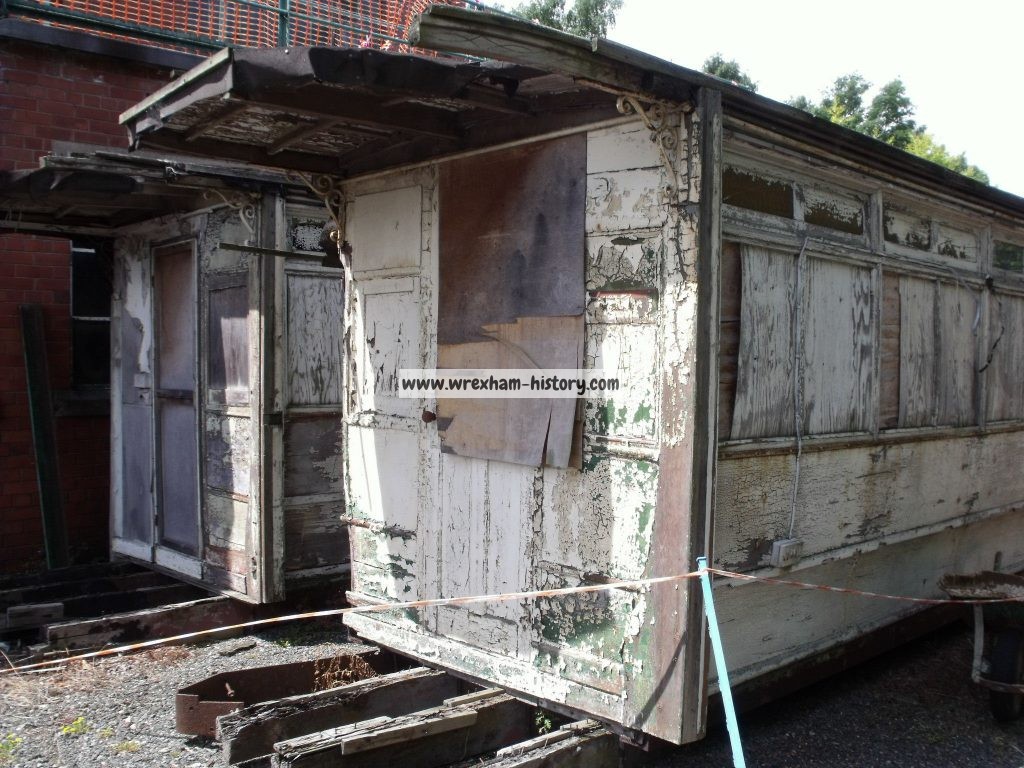 Vic Cleveley alerted Wrexham Museum to the poor state of the vehicles, it contacted Mr Strange and he gave the trams to the museum for restoration.

From the original 10 trams, housed at the WETC depot in Johnstown, these are the only two known to have survived.

The museum plans were to cannibalise the poorer one to make one complete carriage for display. Although, to date no work has been carried out to restore either of the trams and the still sit in the open at Bersham Colliery. 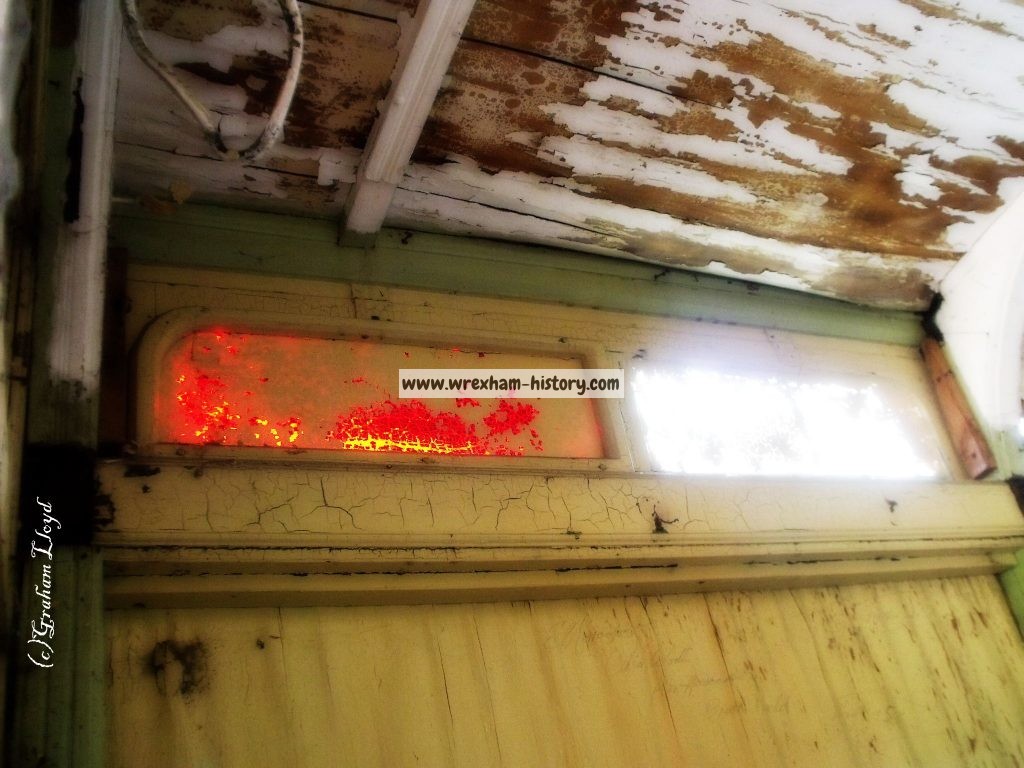 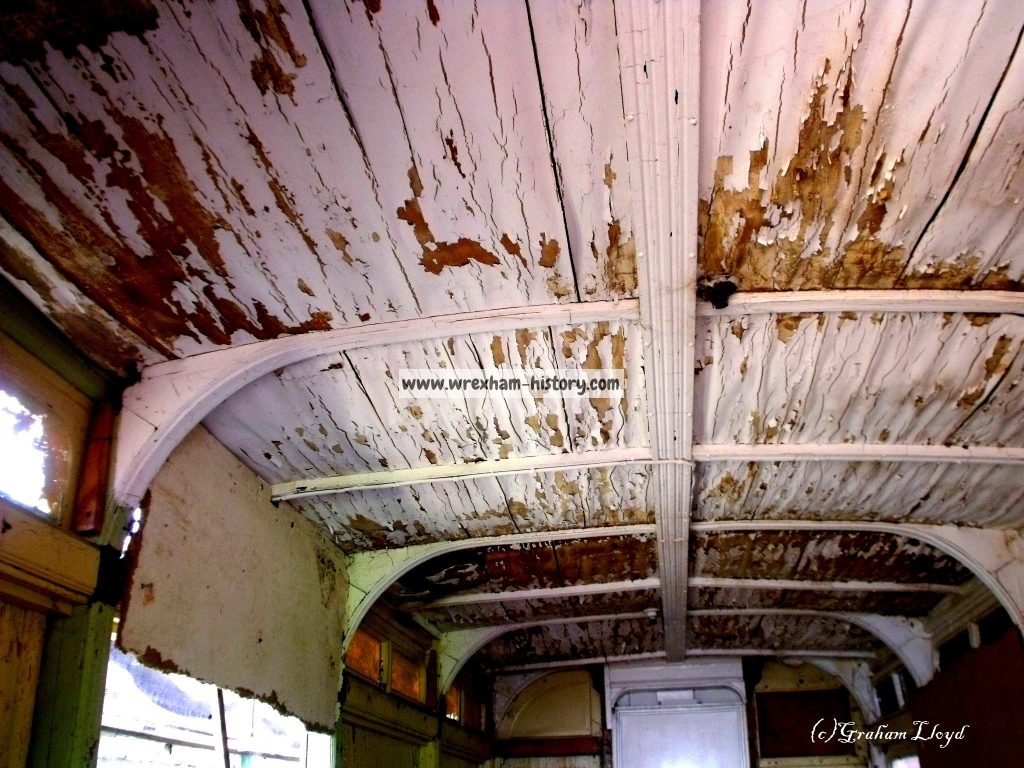 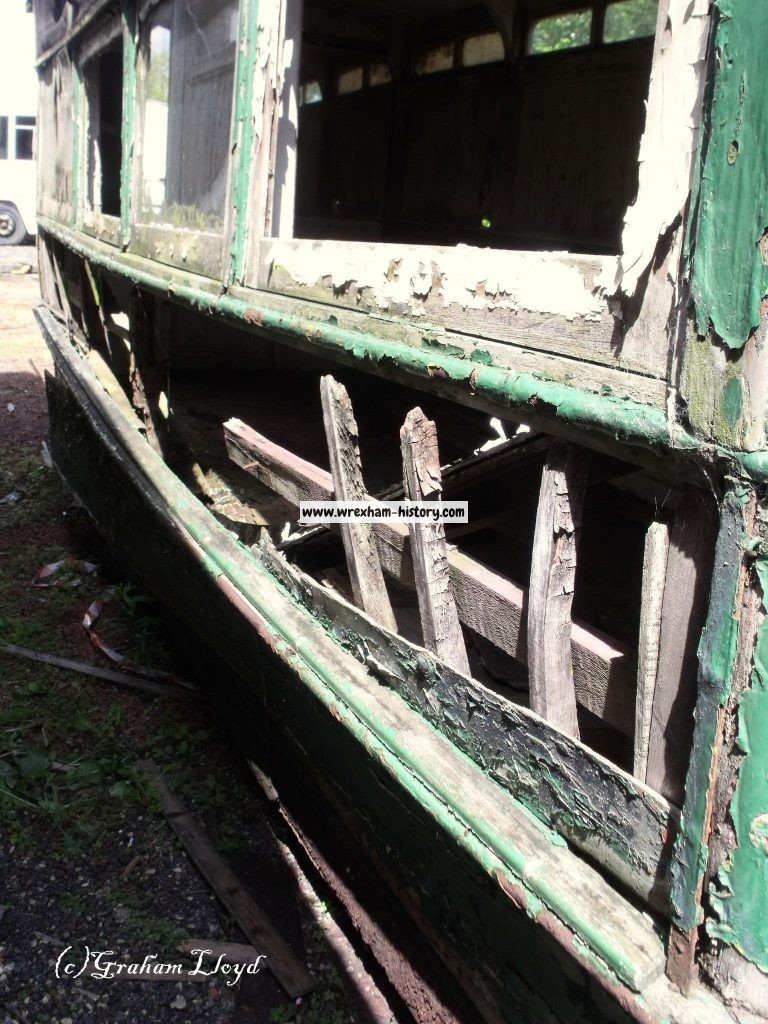 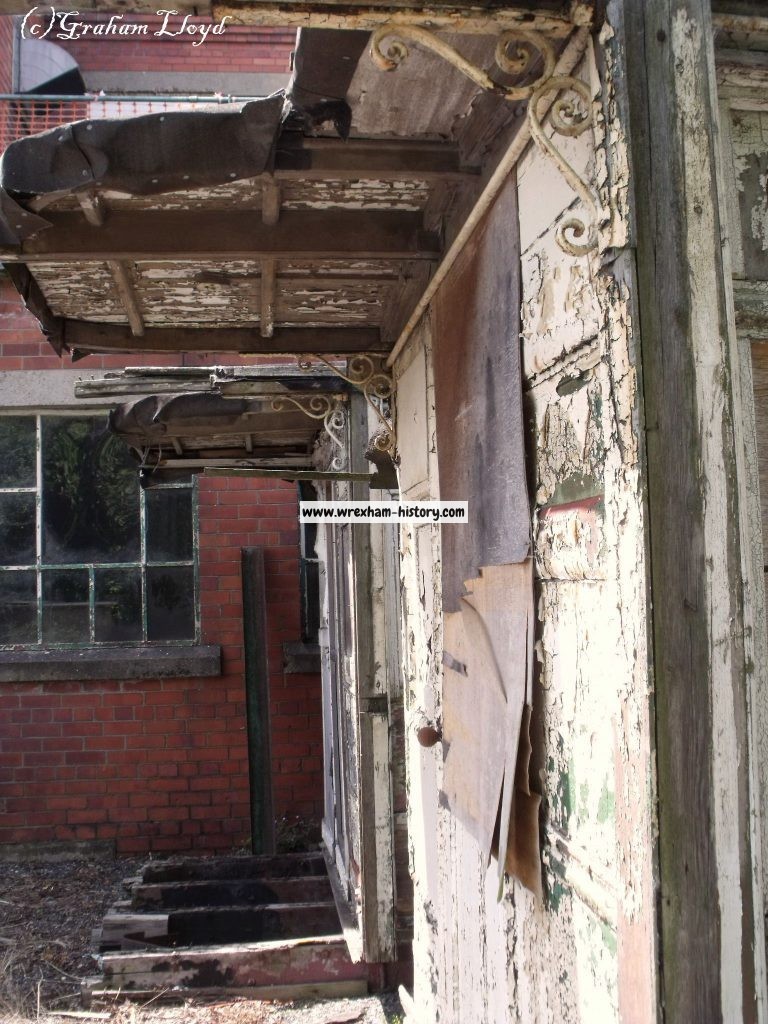 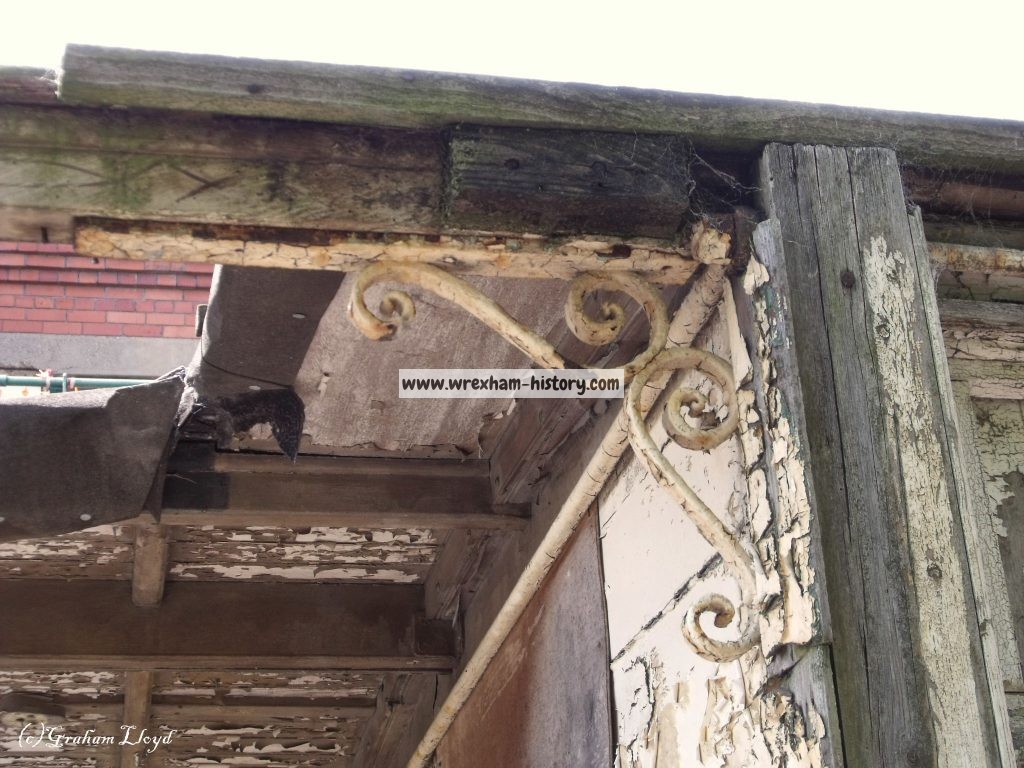 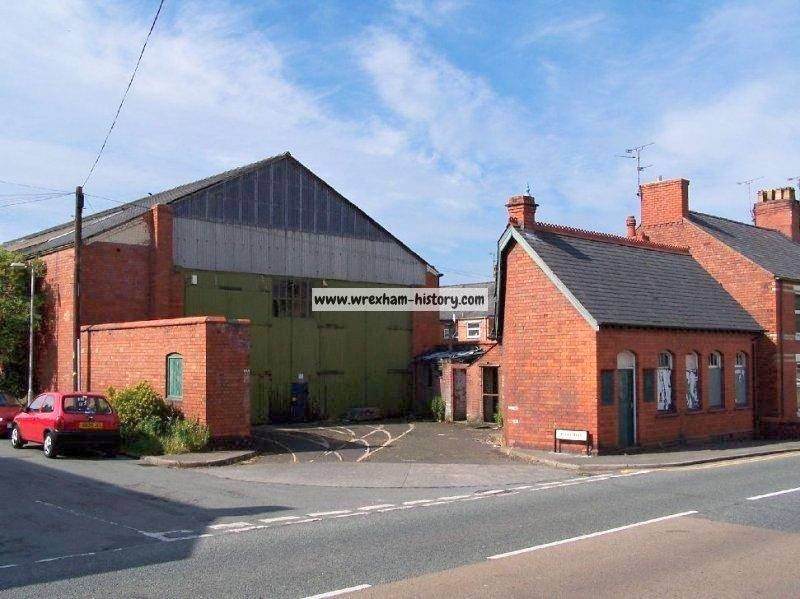 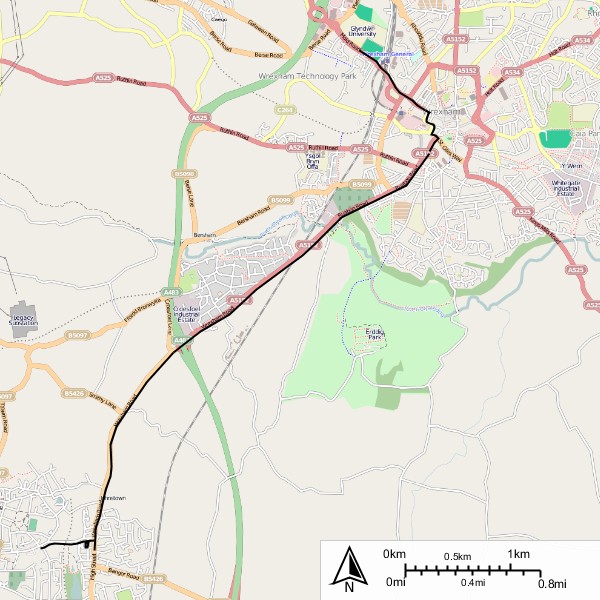 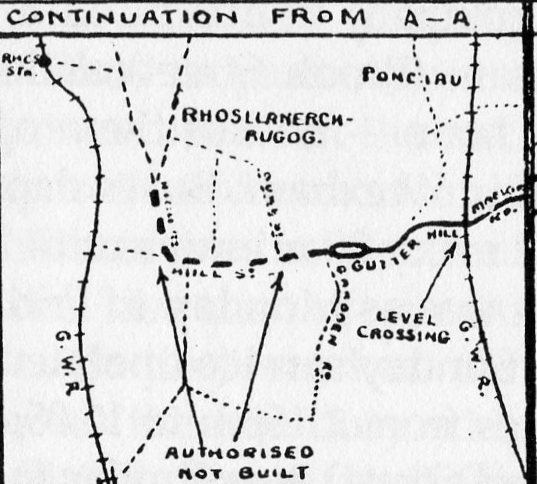 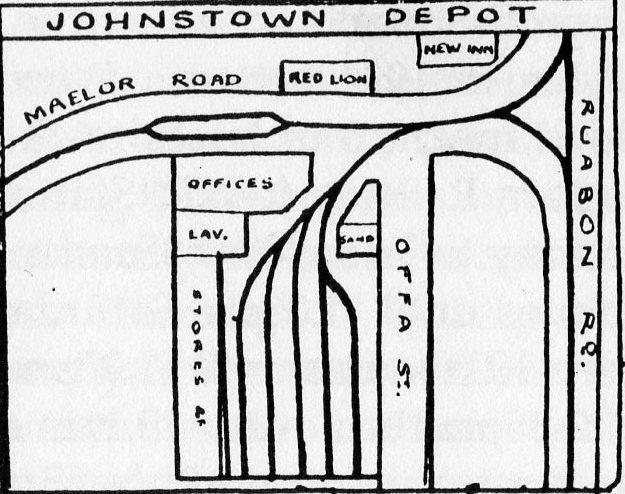 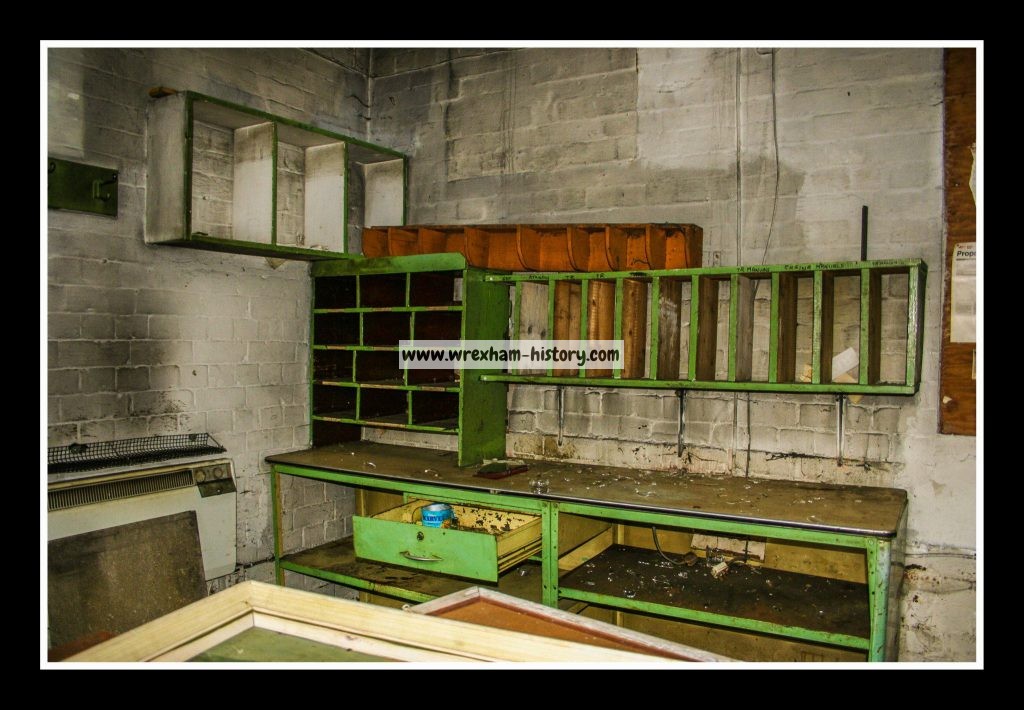 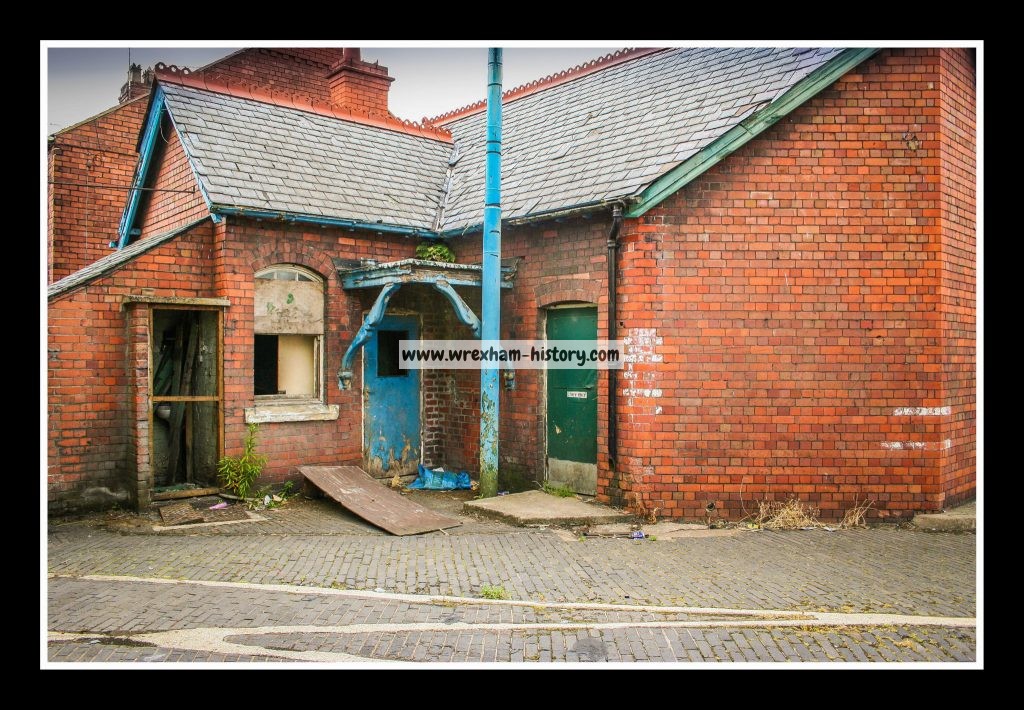 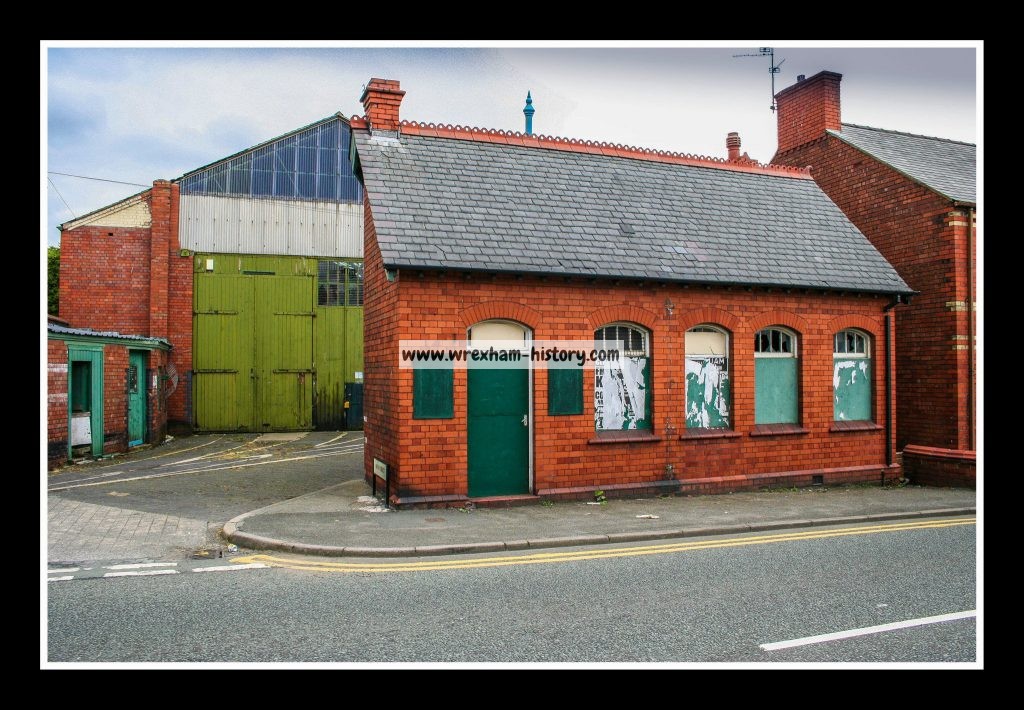 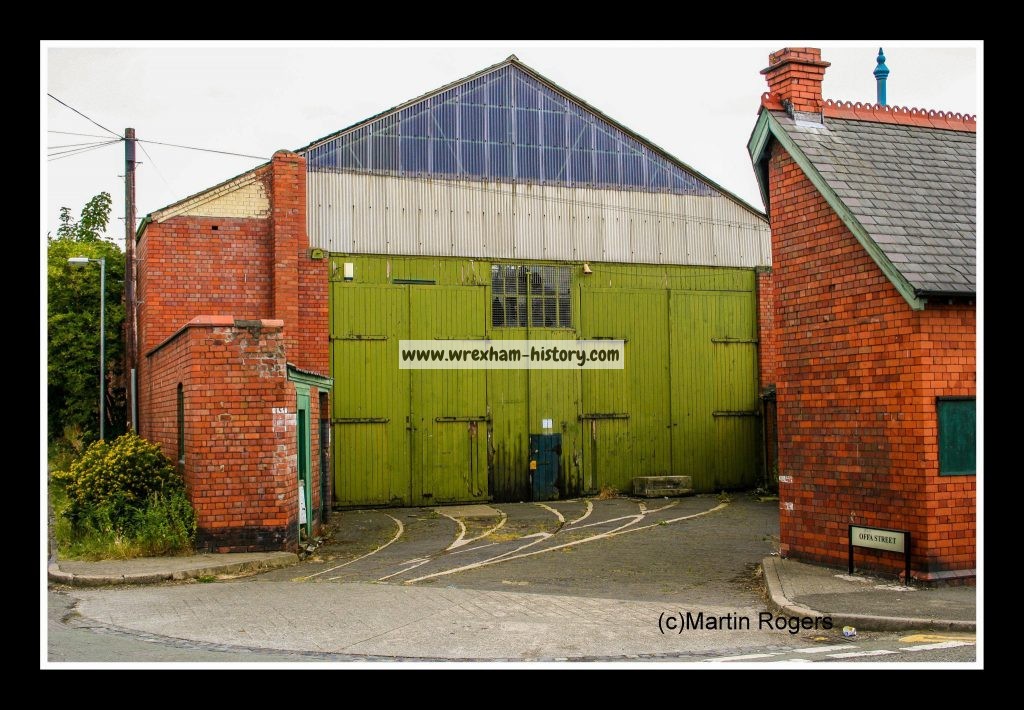 Thanks to Martin Rogers for the Johnstown Depot pictures

Selection of photographs of Charles Street, Wrexham. Many thanks to Mark Griffiths for the use of his images. If you have photographs you’d like to share, get in touch via our contact page. Total Page [more]

At 10.30pm, on the 10th January 1865, William Kendrick, aged 21 and George Price, a baker living in Wrexham were standing and talking in Bridge Street, Wrexham.  These two males were approached by Joseph Hughes, [more]

The school attendance officer at the back was Arthur Augustus Roberts. The family were from Trefnant Nr. Rhyl. Arthur’s father William Roberts was the police sergeant in Rhos for a very long time. In 1893, [more]