A meeting was held at the National Schoolroom in Rhos in March 1878.  It was chaired by the Rev. J. Jones.  A resolution was proposed and carried unanimously in favour of purchasing an iron church for divine worship, in lieu of the schoolroom they were then using.

A working committee was appointed with Mr. E. Evans as chairman and the Rev. J. Jones, vicar, as treasurer.  Rev. J.W. Rees, curate, and Mr. Fitch were joint secretaries.  At the time of the meeting almost £250 had already been promised.  Mr. Fitch had guaranteed to collect £100 towards the project.

Later in March 1878, a large and influential meeting of congregation members was held in the schoolroom to discuss the proposed iron church.  The chairman, Mr. E. Evans of Bronwylfa, was unavoidably absent so the vicar, Rev. J. Jones, occupied the chair.  Mr. Sothern of Wrexham attended at the express wish of the committee to explain his plans.  After due consideration the congregation decided that Mr. Sothern’s plans were the best and also among the cheapest.  Mr. Sothern was to commence the work at once with the hope that building would be ready for use by mid-summer.

In April 1878, a meeting of the church promoters was held in the National School to discuss the tenders.  Mr. Sothern’s was duly accepted with the assurance that the work would be completed by the end of June.  The estimated cost was £500, but it was noted that at that date only half the required sum had been promised.

On 8th August 1878, an annual meeting of Bishop Carey’s fund was held at the Palace, St. Asaph.  One of the grants made was that of £25 to the Rhos Iron Church.

In the afternoon of Monday, 26th August 1878, a Welsh sermon was preached in the Iron Church by the Rev. W.G. Thomas, vicar of St. Asaph and another Welsh service was held in the Old Church at night, when the Rev. David Howell preached an eloquent discourse.

On Tuesday 27th August, Saint Mary’s Iron Church, located beside the Parish Church of St. John, and was officially opened for divine worship.  The manager of the Wrexham District Tramway Company arranged for special cars to take people to and from the opening services.  English morning service was at 11:00am, with Holy Communion, when the sermon was preached by the Reverend and Venerable Archdeacon Smart, M.A.  The prayers were read by the Rev. J. Jones, vicar.  The first lesson was read by the Rev. Mr. Williams and the second lesson by the Rev. Mr. Rees.  Specially chosen hymns were rendered by a large choir who had been trained by the organist, Mr. Baker, schoolmaster.  The service was full choral.  Both before and after the service, voluntaries were played and the anthem was taken from the 2nd and 4th verses of the 84th Psalm.

On the evening of Wednesday, 28th August 1878, there was an English service at 7:00pm in the Iron Church, with a sermon from the Rev. G.H. McGill, M.A., Rector of Bangor.

On Thursday evening, 29th August 1878, a Welsh service was held in the Iron Church at 7:00pm., with a sermon from the Rev. Griffiths Jones, Curate of Wrexham.

On Friday evening, 30th August 1878, at the new Iron Church, a Welsh discourse was delivered by the Rev. Griffiths Jones, curate of Wrexham, followed by an English service conducted by the Rev. R. Bowcott, B.A., Curate of Llangollen.

The Wrexham Guardian noted that the Iron Church was built by Mr. Sothern of Wrexham to accommodate around 328 people.  It was 58 feet long and 28 feet wide, with an organ chamber, nave, chancel, vestry and porch.  The chancel was octagonal and gave the interior a very nice appearance.  The height from floor to ridge was 26 feet, above which was raised a neat spire belfry, 16 feet in height.  The outer covering of the building was of galvanised corrugated iron and the inner lining was of matched boarding, which with the open framed principals was stained in various shades and then varnished.  The building was well-lit by five windows on one side and four windows on the other side of the nave. There was also a large window in the west end and three smaller windows in the chancel end, this portion of the building being hexagon shaped.

Seating accommodation was provided in the nave for 300 and for about 40 in the chancel.  Mrs. Jones, the vicar’s wife, was instrumental in having the neat floral decorations affixed to the pulpit, reading desk, etc.  Mrs. Jones was also responsible for the beautifying of one of the chancel windows by a patent process.

It was considered to be “one of the prettiest little churches in the neighbourhood”.  The new church was said to be for the inhabitants who spoke English; the old stone church being claimed by the Welsh.  The Wrexham Guardian of 24th May 1879 carried a letter by “Veritas” claiming that in actual fact the Iron Church was built to accommodate the Welsh speaking members of St. John’s.  This agrees with the later statement that St. David’s was built to house the Welsh congregation which met at the Iron Church.

On Sunday 10th November 1878, a children’s service in connection with the Sunday school was held in the Iron Church.  It was well-attended by parents and children.  A Litany was sung by the children and there were Sankey and Moody hymns and an address was given to the children, by the Vicar, based on the words, “Your adversary the devil as a roaring lion walketh about seeking whom he may devour”.  The Rev. J. Williams intoned the service very creditably.

On Thursday, 29th September 1892, the foundation stone was laid for St. David’s Church in Rhos.  This was to take the place of St. Mary’s Iron Church.  The Vicar of the Parish, Rev. T. Pritchard, described the Church of St. David as being, “right in the centre of life.”  It was planned to house the Welsh congregation which was currently meeting at St. Mary’s Iron Church, near the Parish Church. 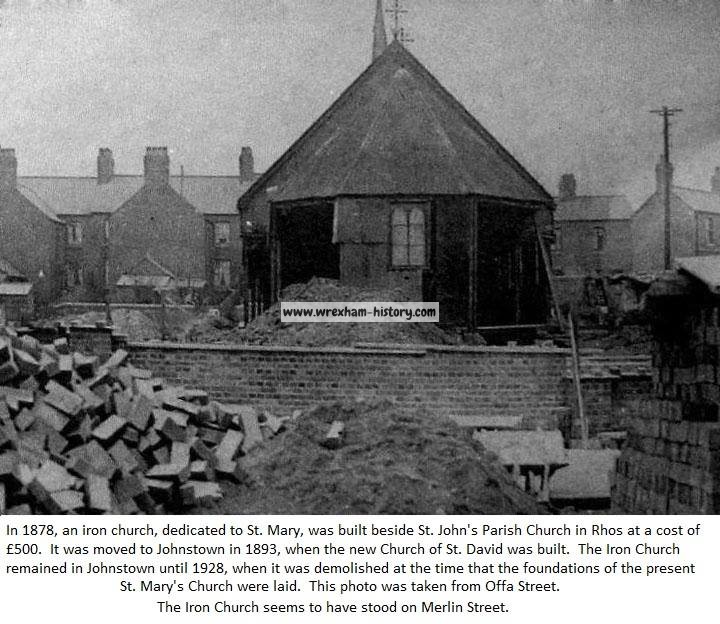 Benjamin Jarvis was a old blind collier who lived in Rhosllanerchrugog. Despite his old age and his blindness he was obviously still a cad! On the 26th August 1854, Benjamin Jarvis married Sarah Evans from [more]

The Hooson Family of Rhos

I have been aware of I. D. Hooson for a while, but in 2014 Graham Lloyd drove me to the Panorama to see Hooson’s monument.  Many words have been written about Isaac Daniel Hooson but [more]