An area of Wrexham that has changed beyond recognition is Farndon Street, Kendrick Place, and the surrounding streets of terrace houses. The families who lived in these tightly packed terraces may not have had much in the way of material possessions, but there would have been a very strong feeling of community.

It was a safe place to allow children to play outside and the streets and back yards would become a play-ground for the many children living there. There was very little money to spend on toys but they had plenty of playmates.

The exact date of the photographs is unknown, but these scenes are from the 1930s. The open windows indicate that this was a warm day, yet even so many caps and hats are in evidence here, even among the children. Hats were an accepted part of the day’s fashion and men; women and children alike would rarely have been seen in public without headgear. The older gentleman posing with the children for the photograph (right) is wearing the full waistcoat, jacket and hat. 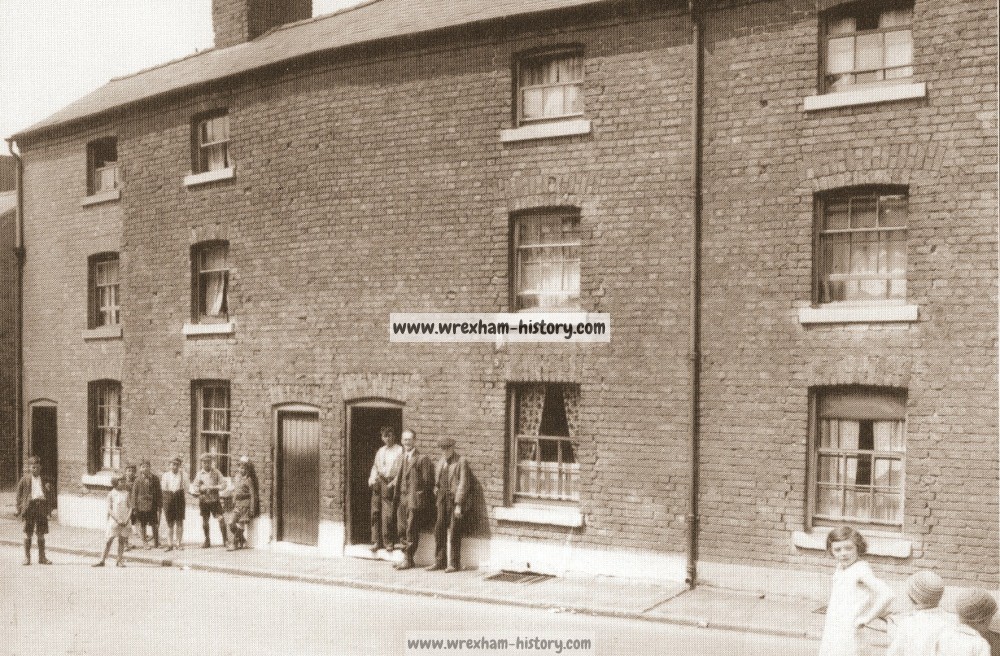 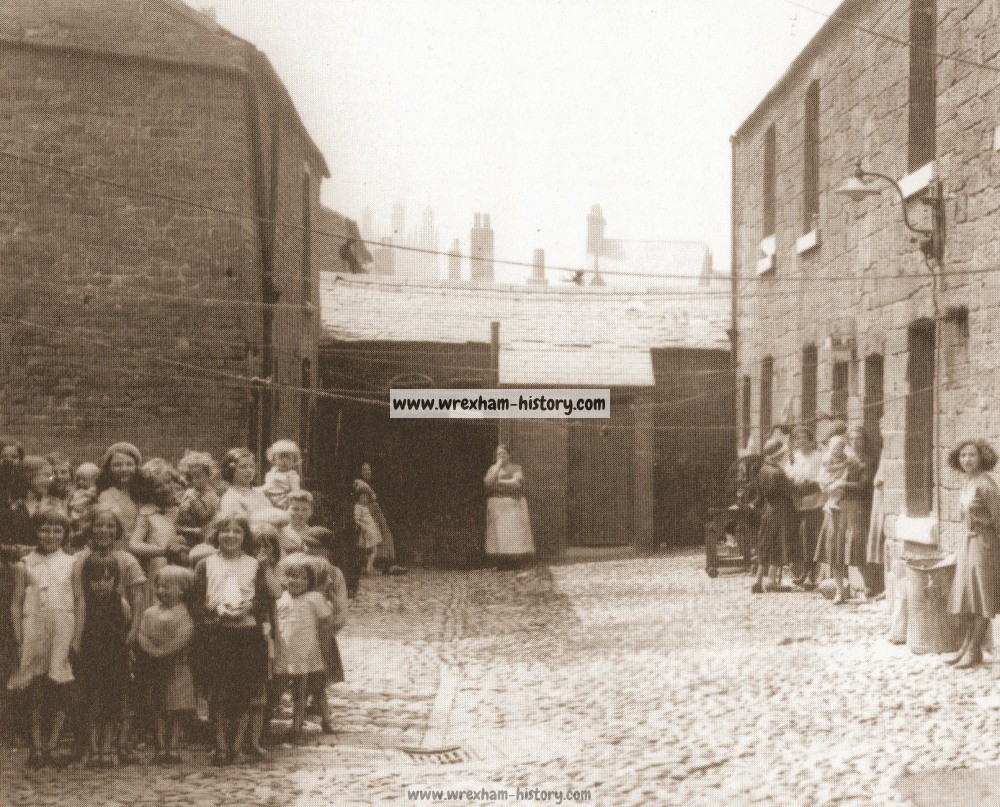 A group of children and a couple of their mums have gathered together and smile cheerfully for the camera (above) while other residents stand in the doorways of their houses – numbers one to five, Harrison’s Court.

The washing lines that stretch across the yard were empty, which they would surely not have been had it been Monday, the traditional washing day! For centuries Monday remained wash day right up until the coming of automatic washing machines and the practice of more women going out to work.

There were many men about at the time these photographs were taken, so perhaps the photographer called round one Saturday morning. Wrexham had many industries at the time, and the men would perhaps work in the breweries or the brickworks, or they would work in the leather tanning industry or in steel production. 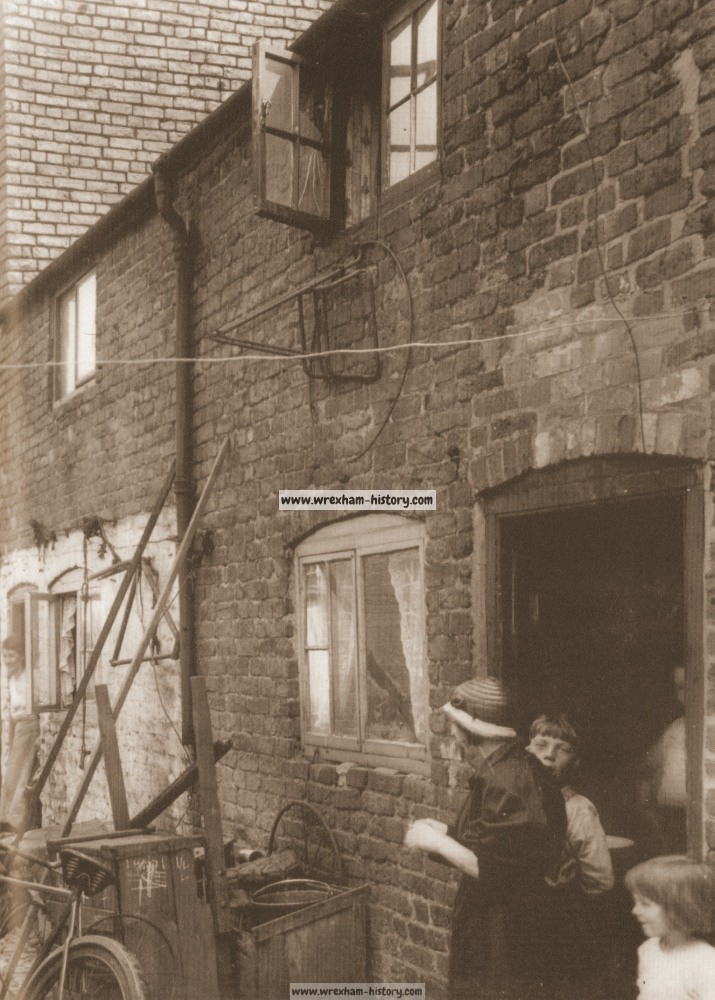 Many them would possibly work as miners; at one-time coal was one of the major industries in Wrexham with as many as 36 pits operating in the area. Industry was to decline in Wrexham after the second world war; the tanneries closed, as did the brickworks, and when the coal reserves began to run out the mines closed one by one. Bersham, Wrexham’s last colliery, closed in 1986.

Harrison’s Court, situated behind Farndon Street, was scheduled for demolition and these families would soon find themselves uprooted from their tight-knit community. 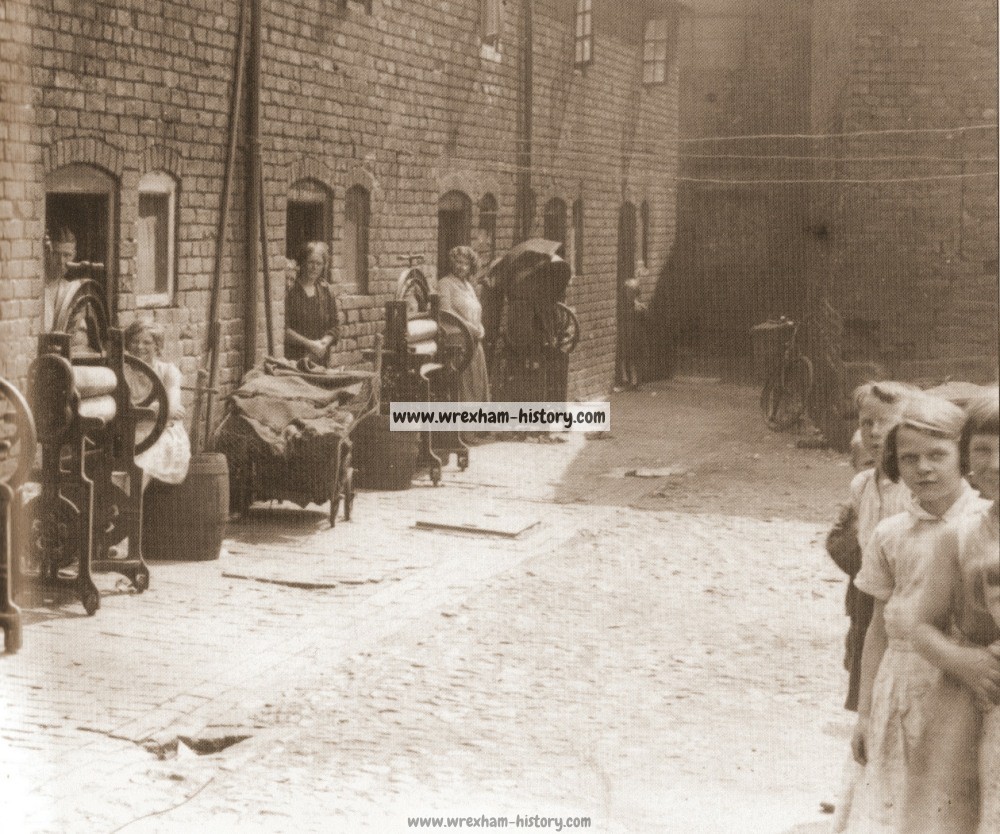 Note the number of residents who came out of doors to pose for the photographer; we should remember that sixty or so years ago far fewer people owned cameras, and having a photograph taken was still quite a rare and special event. An interesting feature of this view is the way these residents’ living space overflowed into the yard; mangles, dolly tubs, buckets and tables were a standard feature. And note the wonderful old hip bath – and the bucket to fill it with – hanging on the wall outside one of the houses.

Living space was very limited, of course, inside these small cottages, so the family’s weekly wash had to be done outside. And not only the family wash; women rarely went out to work at that time so many of them took in washing from the more affluent people in the town. Coping with rain, hail, sleet, snow and all the other aspects of the British weather was all part of the job for these women. 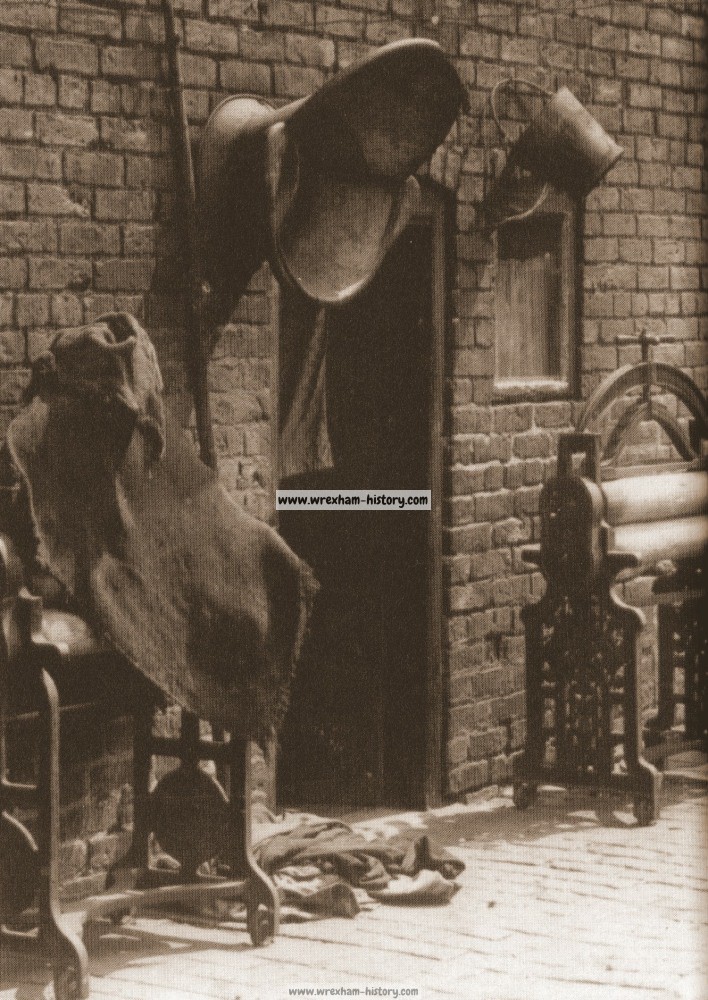 Every washday the lines would have been filled with clothes drying in the wind. Brook Street, Brook Square, Farndon Street, Harrison’s Court – all were in the Borough of Wrexham’s clearance area and were marked for demolition. One hopes that these families about to be rehoused were happy in their new homes and that their sense of community would be re-established in a different area of the town. 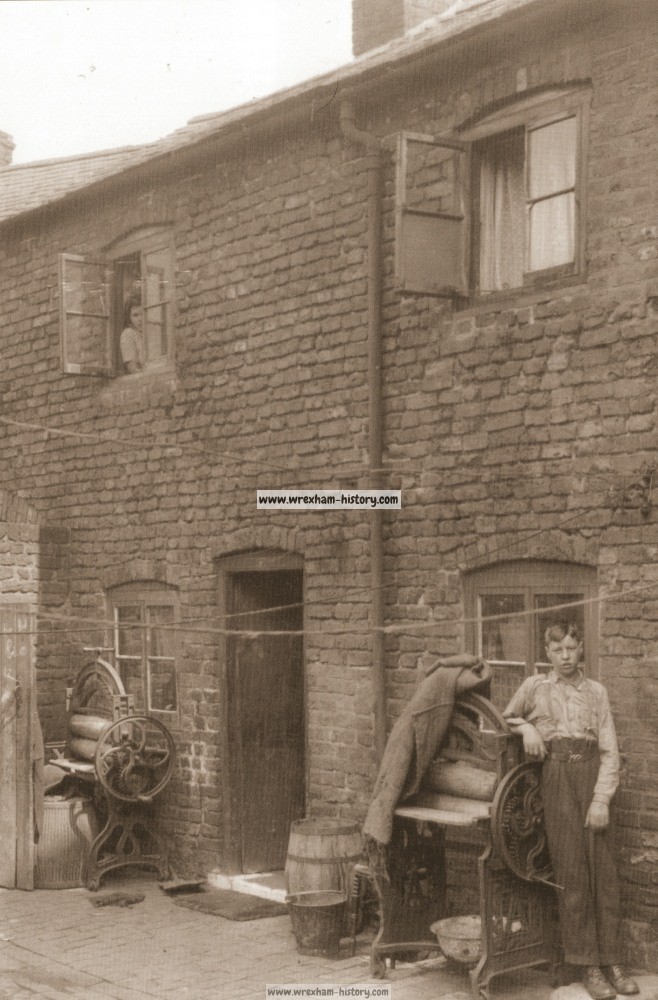 Above: Brook Square, and a young teenager leans against the mangle for this photograph while a girl takes in the scene from an upper window. Over the years, Wrexham’s clearance plans have increased the number of council houses available to families, and the number of new houses built for sale.

In the 1930s a deposit of around £27 with repayments in the region of 14/ – a week would have secured you one of these brand-new homes. The full price would have been about £500. This entire area is unrecognisable today; when these industrial terraces between the British School and Bridge Street were cleared, the site was used for the building of the Odeon cinema (later a Top Rank Bingo hall) and today La nightclub. Farndon Street, Harrison’s Court and Brown Horse Yard also disappeared and eventually rows of new shops, a multi-storey car park, a new Chinese restaurant and the Do-it-All store were built on nearby sites. The large Tesco store was built where Kenyon Street and Kendrick Place used to be. 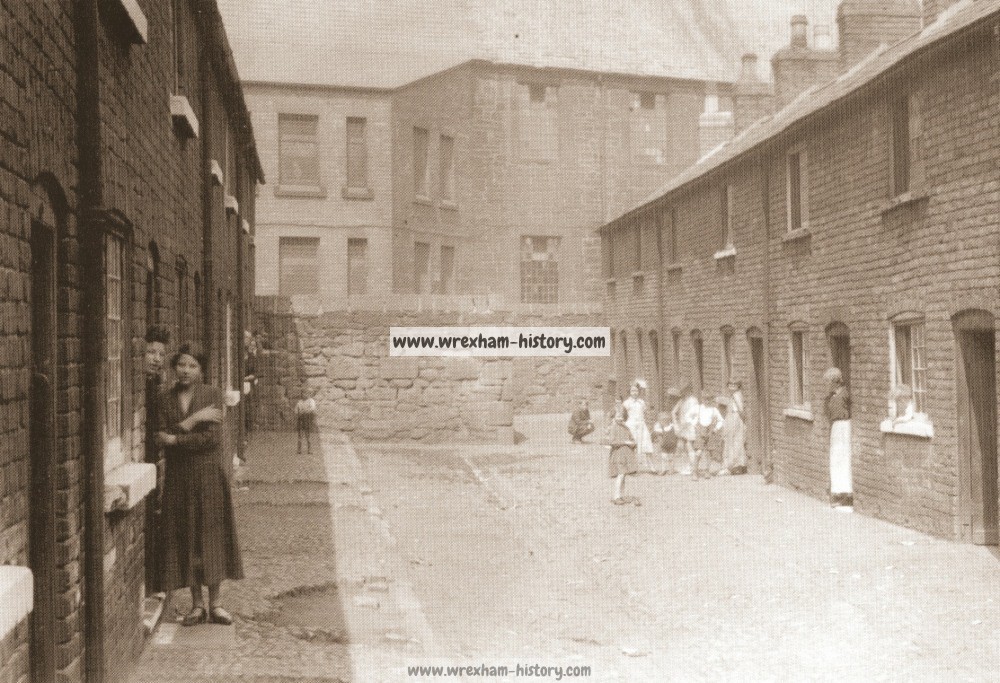 Above: The Old British School (which was no longer operating as a school at the time this photograph was taken) rather forbiddingly overshadows the end of Brook Square, giving the old street a rather claustrophobic atmosphere. The school was built in the 1840s on the site of an old tan yard; the site was donated by an unusually forward-thinking Wrexham citizen, Mr A W Thornley, who was concerned about the lack of education provided for the poorer classes. Education of the labouring classes was an unpopular subject with many Victorian employers who believed that education led to unrest. The British School was built, however, and was not only attended by children but also by adults who wanted to be better informed. Brook Square, which adjoined the school, became widely known as Mary Ann Square, a tribute to their benefactor Mr Thornley’s wife, Mary Ann. The school closed in 1901, which must have been a sad day for its last headmaster Charles Dodd. The facility was transferred to Victoria School in Poyser Street. Brook Square was home to many families; they were a community and this was their normal environment and the neighbours standing in their doorways and the group of children playing in the street seem contented enough with their surroundings. This was 1933, however, and their whole familiar area was about to be erased for ever from the Wrexham street plan. 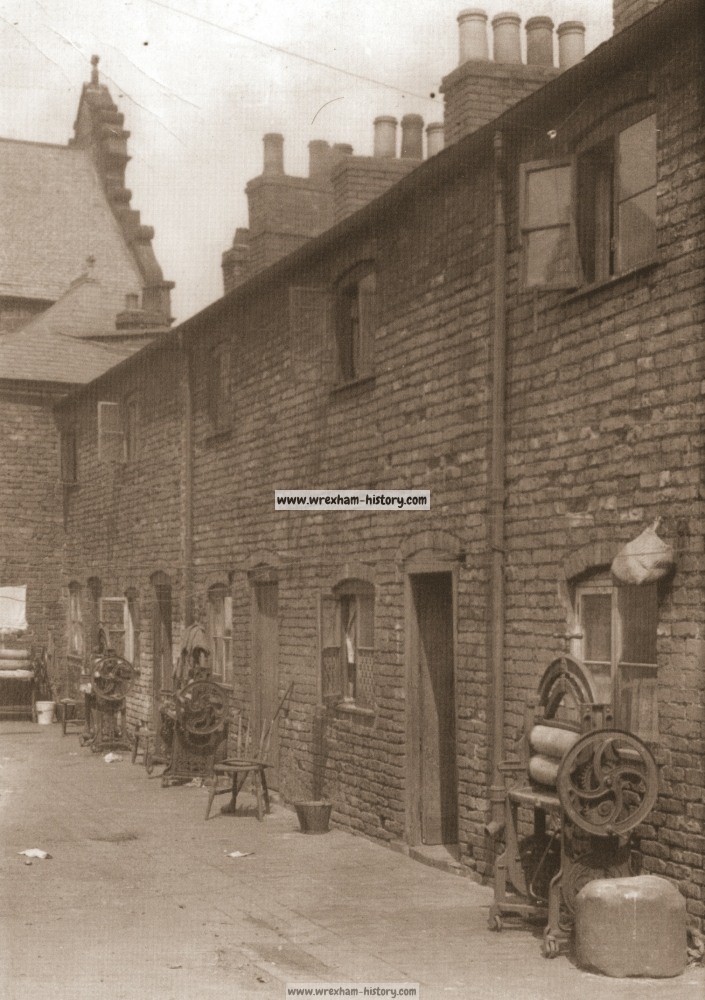 Above: A broken chair, an old table, galvanised tin baths and tubs, buckets and mangles – all were essential to the way of life in Brook Street in the 1930s. Bathrooms, of course, had long been an undreamed-of luxury to the families who lived in the community, and keeping a large family clean meant a great deal of hard work for every long-suffering mother. Once a week she would have set up a galvanised tin bath in the kitchen, and painstakingly filled it with hot water by way of a bucket. One tub of hot water would probably be all that was available for the entire family. Toilets, usually marked with house numbers for identification, were situated in the yard and were often shared by more than one family. The lives of these residents, however, were soon to take a turn for the better. Their homes were scheduled for demolition, and rehousing would no doubt provide them with the once unimagined joys of a bathroom with hot running water and an indoor toilet, and a tiled kitchen with modem conveniences.

Below: Three smart lads pose for the camera in this picture from the late 1950s, bringing memories of our school days flooding back. The first thing to strike us is just how smart the little lads were, even though money was tight and it was not always easy to find cash to spend on clothing. Still, people did the best with what they had, homemade haircuts and hand-me-down clothes made up for the lack of money when the need arose. 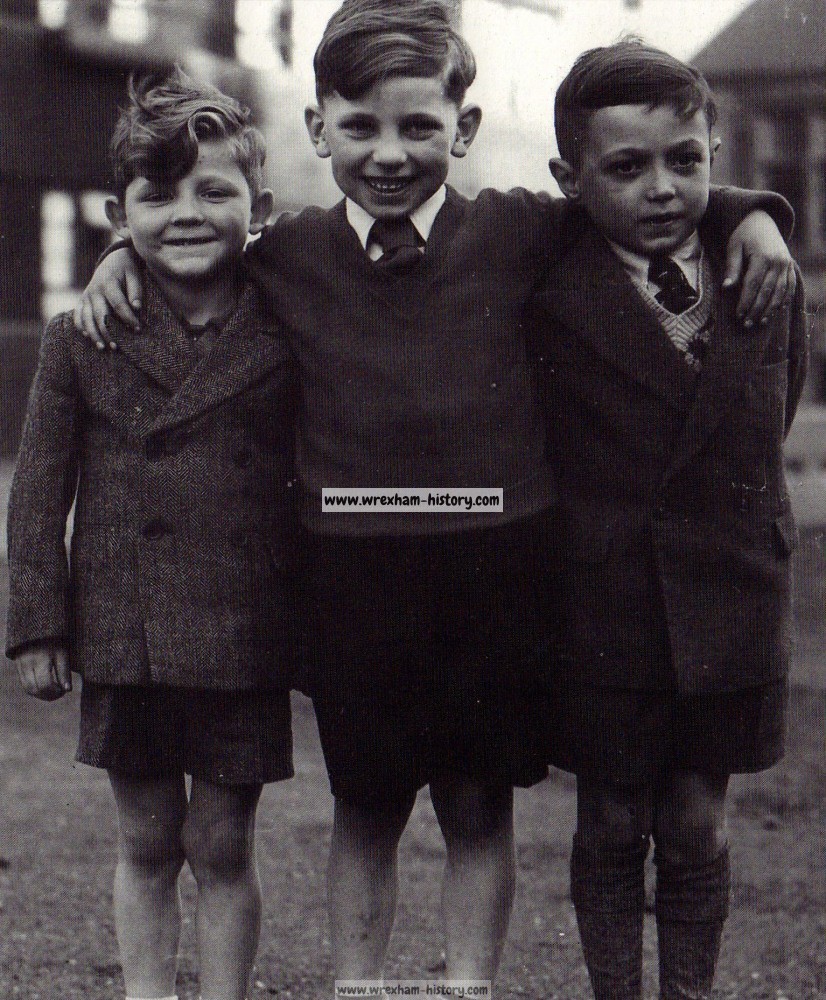 A nostalgic glimpse backwards at a part of Wrexham that no longer exists, along the ridge tiles of a line of outside toilets in Ashfield Road. The 1950s were years when many ordinary families began to feel the effects of post-war prosperity that had been looked-for since 1945.

The photograph shows an interesting mixture of old and new; though some of these homes sported television aerials, they still lacked the facility of a modern bathroom. Tin baths were still the order of the day for the inhabitants of these houses, though the washing hanging on the line might well have been done with the aid of a modern electric washing machine. With their own yard to the rear of the house, the people who lived here would have been luckier than some who lived in the town a decade or two earlier, whose homes faced straight on to the pavement or into a shared courtyard. 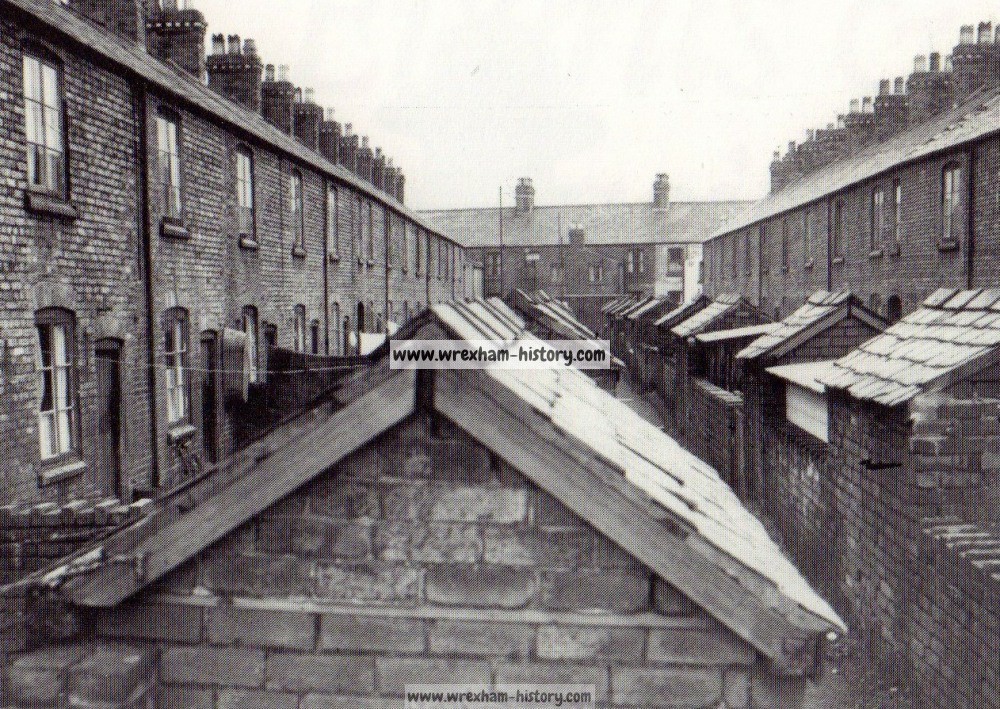 These terraces in Ashfield Road were eventually demolished and in the 1960s were replaced by rows of modern houses. It would have been an exciting day when the new tenants at last moved into the new homes that they had waited for so long. 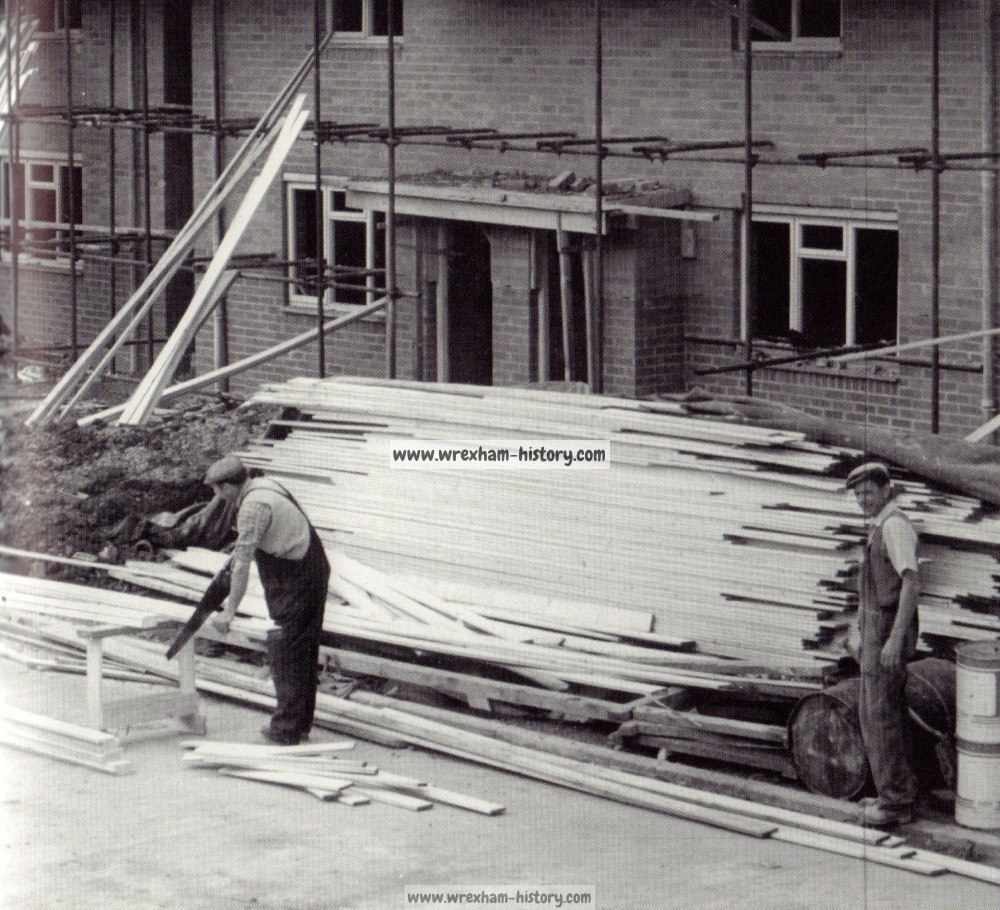 Over the years Wrexham has put several clearance plans into operation such as the large housing developments in Acton, built during the 1930s, and the Queens Park estate, developed in the 1950s. Various private housing has long been available in Wrexham, and several private developments were constructed during the 1960s. 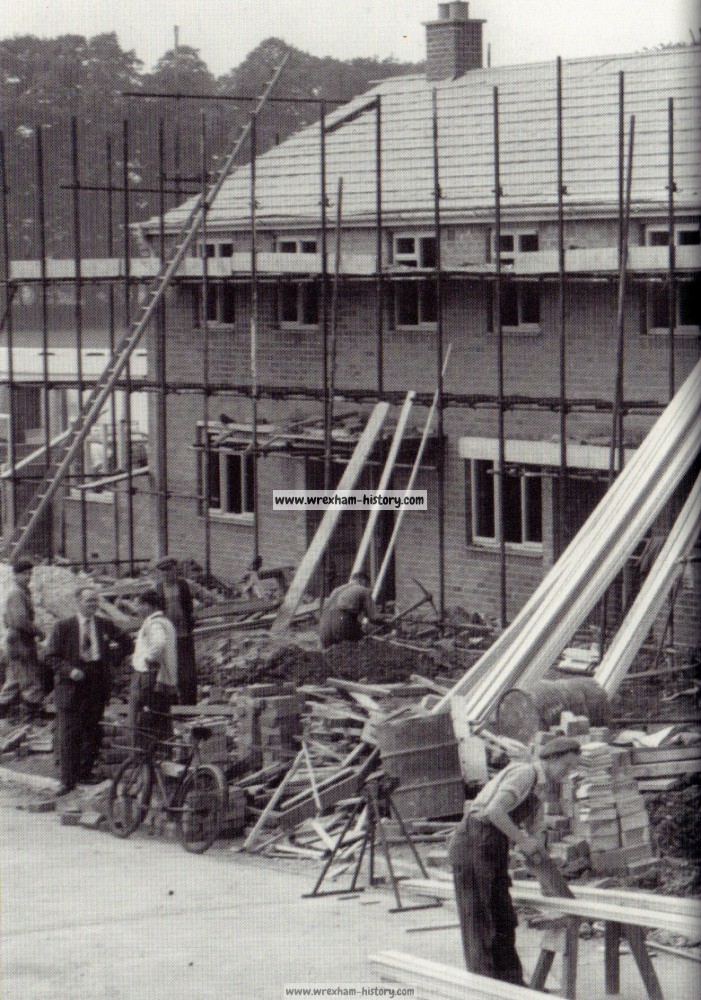 William Barratt was born on the 21st February 1890 in Wrexham, Wales 1. The 1891 Wales Census return further narrows down his place of birth as being Gwersyllt, Wrexham, Denbighshire. At the time of the [more]