History of Welsh Baptists at Salem Chapel, Penycae. It was before the year 1770 that the Baptists cause started in Penycae and it was started in a straw thatched cottage in Drefechan. The first baptism took place at Afon Bryn Coch (bottom reservoir) in 1772.

The Baptists then moved to no. 10 Treanog, Bridge Street. (This is the house where Emyr Evans lived). This was in 1791 and the first minister was Thomas Davies who came to this Chapel in 1805. 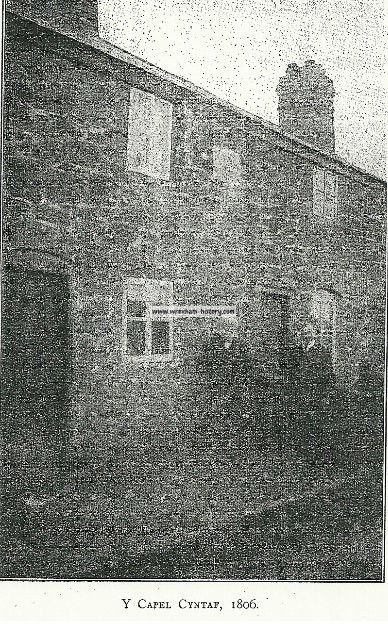 The Baptists then moved to the first official Chapel, Bridge Street in 1806 with Thomas Davies still the minister. (This Chapel is next to Caerwyn Thomas’ house going down Bridge Street, I remembered them as cottages).

The Baptists then moved to their second official Chapel in 1825. This was built and situated on the corner of Chapel Street and Bridge Street. (It was on the land opposite the present Salem Chapel which was used as a cemetery). The field this was built on was known as Cae Mab y Corn at this time all baptisms took place at the Mill Pool, Pentre.

It was in the year 1809 when Mr. Samuel Roberts, Plas Ucha (who was a strong Baptist) bought a parcel of land called the Clwyt. In 1810 he built 2 houses (where Bessie and Bob Thomas lived) and then sold a piece of this land to the Chapel for £5.00. This piece of land was used as a cemetery (this is the old cemetery behind the present house which today has a date on it, 1810). 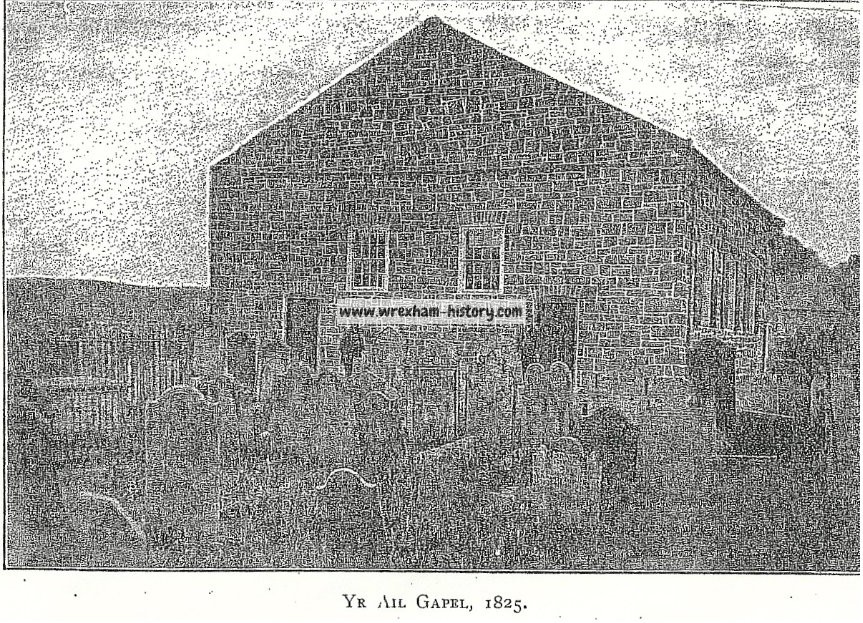 In the cemetery is a grave stone marked Tamer Pritchard of Holywell Sept 30 1809. The story says that this young girl was carried on horseback by her father from Holywell to Penycae and the reason given why she was buried at Penycae was that the authorities at Holywell refused her to be buried at Holywell because she was not baptised.

The Baptists then moved to their present Chapel in 1878 and they used the stone of the old Chapel as a foundation for the new building. Thus during the building of the new Chapel the Baptists built a tent to worship during this period. The contractor who built this Chapel was Mr. Edward Davies, Cefn at a cost of £982.

In this new Chapel a baptism’s well was installed and a harmonium was bought for £5.19.

After these jobs were completed on 3rd March, 1895 the Chapel was reopened with the Rev. W.B. Jones, minister. The Chapel was able to seat 700 with the new – gallery.

In 1908 a new and present organ was installed and at the same time acetylene gas was installed, the big seat was extended, the Chapel was painted and decorated. The whole cost of these jobs including the new organ was £850.00.

In the cemetery opposite the present Chapel is a column in memory of Rev. John Williams who was a minister at Penycae and Rhos who died in 1856, 50 years old, and later on this column was unveiled by Mr. David Lloyd George.

The anniversary of the installation of the organ at Salem was held on 30th May 2008.

The Wheelwrights Arms was built in 1864 and closed as a pub around 2002. It was a Marstons Border house when it closed. In 2014 it was finally converted to residential use. Previous landlords include: [more]

Wrights of Wrexham (Buses) – A talk by Mike Wright.

Reservoir House at Penycae prior to demolition. Can you put a date to  it? Source: Source: John Davies from the collection of the late Emlyn Davies, Penycae. Total Page Visits: 1730 – Today Page Visits: [more]