The S.S. Wrexham and it’s Captain.

On 2nd December 1914 it commenced sailings for the Great Central Railway. Tilbury-Rotterdam. 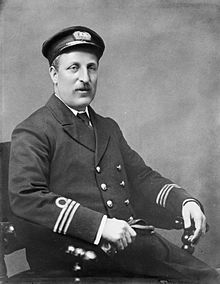 Fryatt was born on 2 December 1872 in Southampton, the son of Charles and Mary Fryatt. He attended Freemantle School in the late 1870s. In 1881, Fryatt’s family lived at 22 Trinity Terrace, in St Mary’s, Southampton, but later moved to Harwich, Essex where he attended the Corporation School. He and his wife, Ethel, had seven children; six girls and one boy. The children were Olive, Victoria, Doris, Vera, Mabel, Charles and Dorothy. The younger Charles later followed his father into the merchant navy, training at HMS Worcester.

On leaving school, Fryatt entered the Mercantile Marine, serving on SS County Antrim, SS Ellenbank, SS Marmion and SS Harrogate. In 1892, Fryatt joined the Great Eastern Railway as a seaman on SS Ipswich. Fryatt’s father had been the First Officer on SS Cambridge. Fryatt rose through the ranks, serving on various ships. His first command was SS Colchester. In 1913, he was appointed master of SS Newmarket.

On 3 March 1915, Fryatt’s command, SS Wrexham, a Great Central Railway ship, was attacked by a German U-Boat. The ship was chased for 40 nautical miles (74 km). With deckhands assisting the stokers, the vessel made 16 knots (30 km/h) when it would normally have been pushed to make 14 knots (26 km/h). Wrexham arrived at Rotterdam with burnt funnels. The Great Eastern Railway presented Fryatt with a gold watch for this feat. The watch was inscribed Presented to Captain C. A. Fryatt by the chairman and Directors of the G.E Railway Company as a mark of their appreciation of his courage and skilful seamanship on March 2nd, 1915. Later that month he was in charge of Colchester when it was unsuccessfully attacked by a U-boat.

On 28 March 1915, as captain of the SS Brussels, he was ordered to stop by U-33 when his ship was near the Maas lightvessel. Seeing the U-boat had surfaced to torpedo his ship, Fryatt ordered full steam ahead and proceeded to try to ram U-33, which was forced to crash dive. This action was in compliance with orders issued by Winston Churchill to captains of merchant ships. These orders included treating the crews of U-boats as felons and not as prisoners of war, in consideration of the German Empire’s policy of unrestricted submarine warfare. White flags were to be ignored. Churchill’s order also stated that survivors from U-boats might be shot if this was more convenient than taking them prisoner. If a captain were to surrender his ship he would be prosecuted by the British. The Germans became aware of these orders when they found a copy of them upon capturing the SS Ben Cruachan in October 1915. For this second action, Fryatt was awarded a gold watch by the Admiralty. The watch was inscribed Presented by the Lords Commissioners of the Admiralty to Chas. Algernon Fryatt Master of the S.S. ‘Brussels’ in recognition of the example set by that vessel when attacked by a German submarine on March 28th, 1915. Fryatt was presented with a certificate on vellum by the Lords Commissioners of the Admiralty. He was also praised in the House of Commons.

On 25 June 1916, S.S. Brussels left Hoek van Holland bound for Harwich. Lights were shown from the beach and a flare was fired. A passenger is reported to have remained on deck and signalled to shore. Five German destroyers surrounded the S.S. Brussels. The passengers were told to prepare to take to the lifeboats and orders were given for official papers to be destroyed, which was done successfully. The S.S. Brussels was taken by the Germans, and the radio was destroyed. She was escorted into Zeebrugge and then to Bruges.

Fryatt and his crew were sent to the civilian internment camp at Ruhleben, near Berlin. On 16 July 1916, it was reported in the Dutch newspaper De Telegraaf that Fryatt had been charged with sinking a German submarine. The Germans knew that U-33 had not been sunk. At the time of the trial she was on active service as part of the Constantinople Flotilla. The basis for the charge was the inscriptions on his watches. Fryatt was tried at a court-martial on 27 July 1916. The court-martial was held at Bruges Town Hall. He was found guilty of being a franctireur and sentenced to death. The sentence was confirmed by the Kaiser. At 19:00, Fryatt was executed by firing squad and was buried in a small cemetery just outside Bruges that the Germans used for burying Belgian “traitors”. The grave was later visited by diplomat Sir Walter Townley (British Ambassador to the Netherlands from 1917 to 1919.) and his wife.

An execution notice was published in Dutch, French and German announcing the death of Fryatt. It was signed by Admiral Ludwig von Schröder. 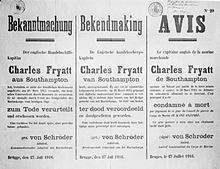 A translation of the execution notice reads as follows:

NOTICE. The English captain of a merchant ship, Charles Fryatt, of Southampton, though he did not belong to the armed forces of the enemy, attempted on March 28th, 1915, to destroy a German submarine by running it down. For this he has been condemned to death by judgment this day of the Field Court Martial of the Naval Corps, and has been executed. A ruthless deed has thus been avenged, belatedly but just. Signed VON SCHRÖDER, Admiral Commandant of the Naval Corps, Bruges, July 27th, 1916.

In October of 1916 the S.S. Wrexham was taken over by the Admiralty for use as an ammunition carrier. Pennant Y2.177.

Finally, on the 19th June 1918 whilst en-route Grimsby-Murmansk-Archangel, with a military cargo, the vessel ran aground and wrecked near the Yugina River in the White Sea (66.04N, 38.02E).

Rogers & Jackson Limited were proud to be called the oldest member of the Owen Organisation. The business began in 1815 in a small shop in Charles Street, Wrexham, purchased by William Overton, a grocer [more]

by Jill Burton. On the 1861 census he was living at the blacksmiths shop, Smithy Lane, Pentrebychan, with his family – father Thomas Wright, blacksmith b1811, mother Ann nee Roberts b1820, plus siblings John b1843, [more] [more]