Borras was the Royal Observer Corps’ No.17 Group HQ, in the UKWMO Western Sector.

The centre consisted of a surface blockhouse of concrete construction faced with brick similar to Winchester, there was a purpose built prefabricated administration block alongside. On the opposite side of the blockhouse is a fixed radio mast. In the 1970’s it was considerd as the North Wales RGHQ. The whole site was owned by a local farm who leased the administration block to a company called ‘Groundwork’ who used it as their office.

The protected blockhouse was leased to ‘K Class’ who had converted it into an audio mixing studio. As with all surface centres, the entrance is in a recessed alcove, a door to the right was the filter room and to the left it gave access to the bunkers main spine corridor. The first room on the left was the decontamination room. It was in a shabby condition and still had its two sinks with a second door leading back into the spine corridor through the dressing room, which also had a sink. The next two rooms on this side were the male and female toilets. The officers room and the male and female dormitories have been completely stripped. The female dormitory was also used as a rest room. On the right hand side of the corridor the first room was the plant room, which has been altered to a studio, it once retained all the ventilation plant, compressors and control cabinet in excellent condition and working order, but have long since been removed. 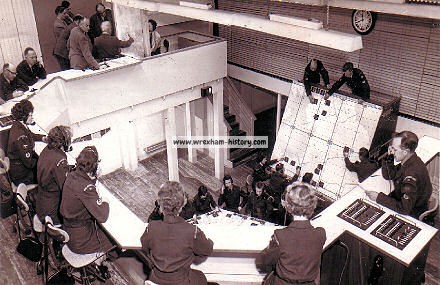 The ventilation plant was still in use until K Class installed their own ventilation system. As the former plant was redundant they offered it free of charge to anyone who wanted it and was prepared to remove it. At the rear of the plant room was the standby generator room. The farmer removed the generator some years ago. A doorway was added (during ROC days) giving access from the generator room to the outside of the building. This doorway had been bricked up on the inside although the door is still visible on the outside.

The next room is the former control room, which has been changed out of all recognition and now houses the company’s mixing and recording equipment. The balcony above has been completely removed and a new curved false ceiling installed some way below the original ceiling level. At the back of the control room a doorway still leads through the old communications centre into the BT equipment room and back into the spine corridor. The BT room once retained an original rack on the wall. The final room on this side of the corridor is the kitchen, which still had (Until recently) all its original appliances and a serving hatch into the canteen. Between the BT room and the control room stairs lead up to the balcony, which has been removed, and the doorway at the top of the stairs leading to it had been bricked up. The new ventilation equipment was housed at this level at the top of the stairs. The tank room remained intact and the radio room has been converted into a second mixing studio.

Today the recording studio is under new ownership and has been rebranded as ROC2 Studios, which is a versatile facility, with several studios and rooms available for recording, mixing, photography, video, rehearsals, storage and much more. You can visit their website by following this link ROC2

ROC2 Studios sits where the municipal aerodrome used to service the Royal Flying Corps during World War I and the Royal Air Force in World War II. The airfield came under control of Royal Observer Corps, precipitated by the onset of the Cold War.

In 1962 a hardened nuclear bunker was built for No.17 Group Royal Observer Corps, North Wales, who provided the field force of the United Kingdom Warning and Monitoring Organisation. No.17 ROC would have sounded the four-minute warning alarm, in the event of war and warned the population of Wrexham in the event of approaching radioactive fallout. The building was manned by up to 80 volunteers.

Due to the Royal Observer Corps being disbanded, the bunker went through a transition between September 1991 and December 1995, was put up for sale by the MOD and was repurposed as a Recording and Mixing Studio by dance music remixers, K-Klass. The gallery was removed, ceiling dropped and a studio built within the map room, designed by acoustician, Sean Zoega, with a production room, and a small vocal booth for guest artists.

After K-Klass vacated the bunker, occupants arrived and left, adding to and modifying the building but leaving Studio 1 largely untouched. Its principal design and function as a high-end Recording and Mixing room has been retained.

The current lease was signed in May, 2015. Customers arrived through the door in its first week of opening, with Catfish and the Bottlemen using the Filter Room to rehearse for their gig at Glastonbury and as a base for writing tracks, for their album, to be released.

A Calrec Q1 mixing console (formerly at BBC Studio 1 in Cardiff) has since arrived in ROC2 Studio 1 and has undergone extensive modifications. Work has continued on the building and with new tenants taking rooms, bands taking storage and creative professionals using the recording and photographic/video facilities, ROC2 Studios is slowly building its band of merry collaborators.

If you have something to bring to the party at ROC2 Studios, get in touch! We are aways happy to meet new people.

Many thanks to Steve Jones and Seb Allemand for the guided tour in September 2016.

ROC sites around the Wrexham and Llangollen area.

The History of the ROC

ROC Monitoring Post Brymbo Since its inception in 1925 as in integral part of the UK air defence system, the primary role of the Royal Observer Corps (ROC) was the recognition and identification of hostile [more]

Wartime Wrexham and it’s contribution WREXHAM, during the 1914-18 war felt the full impact of the hardships and heartbreaks of war. Hightown Barracks, as the depot of the Royal Welsh Fusiliers saw the hasty mobilisation [more]