The Victoria Schools were built around 1890 on Cae Siac, off Victoria Road, Wrexham.

Opening Victoria School school on Tuesday, 1 January 1901 by Alderman Thomas Jones, Mayor of Wrexham, with Charles Dodd as first headmaster. It was regarded as an occasion ‘unique in the history of this good old town’, and the culmination of the efforts of the Wrexham School Board.

The Wrexham Advertiser reported the event very fully in the edition of Saturday, January 5th, under the headlines, ‘Wrexham’s New Board School. Opening By the Mayor. A Brilliant and Memorable Function. ‘Delightful Spring like weather’ greatly helped the celebrations which began at 2-00 p.m. with a procession from the old school at Brook Street to the new school.

The procession was led by the borough band and was headed by Sir Robert Egerton, chairman of the School Board, the Mayor of Wrexham in his Chain of Office and John Francis, the vice-chairman of the Board. They were followed by the members of the Board, the managers of the old British School, all the children of the school and many of the old pupils. On arrival at the central yard of the new school the Mayor was handed a silver key by Lady Egerton and he proceeded to ceremoniously open the school.

After the official opening there followed a public meeting at the school where a number of lengthy addresses were delivered all fully reported by the Advertiser. The Mayor, as was to be expected, was full of praise for the School Board and in his speech stated that the new school indicated ‘how well they have carried out what was entrusted to them.’ Although the Board had taken over responsibility for the Brook Street School in 1898 it had not been regarded in the town as a Board School and was constantly referred to as the British School.

There had been no change in staff, organisation or curriculum, and the mayor, even when opening the Victoria School, referred to it as a ‘new school for the boys and girls of the British School’. However, the move from Brook Street to Victoria School was a break with the past and clearly indicated that Wrexham now for the first time had a board school.

The content of speeches at opening ceremonies must be regarded with a degree of scepticism, but some of the speakers were refreshingly honest. Sir Robert Egerton outlined the events leading up to the transfer of responsibility and the building of the new school and spoke with some feeling when he said that the school was not only due to the efforts of the School Board but also to the guidance of the Education Department; ‘The ideas of the education department regarding schools are very progressive at every step sanction of the Education Department had to be obtained.

The site of the building, the scale of the accommodation for the children, the plans of the building and the arrangements of the rooms, were all subject to the scrutiny of the Education Department’. It is not difficult to detect a feeling of relief that the school had opened at all. George T. Kenyon, M.P., Conservative representative for the Denbigh district, also spoke with some feeling.

He had been involved in the contested School Board election of 1874 when the Wrexham Advertiser carried a headline proclaiming, ‘Defeat of the Conservative Candidates’, and ran a leader stating that, ‘The Liberal Party have invariably deprecated mixing politics with local and municipal affairs, but if our political opponents force the issue upon us we shall be quite ready to take up the gauntlet … ‘ Kenyon was now able to state that ‘thirty years’ experience of the Act had to a great extent broken down the wall of partition between Board Schools and Voluntary Schools’ 20 Canon Fletcher may not have agreed with him. Mr. L. J. Roberts, H.M.I., while congratulating the School Board and wishing it success, could not but point out that while average attendance for England and Wales was 82.5% it was only 72.9% for Denbighshire and that also in Denbighshire there were still 463 children attending elementary schools who were employed for wages. 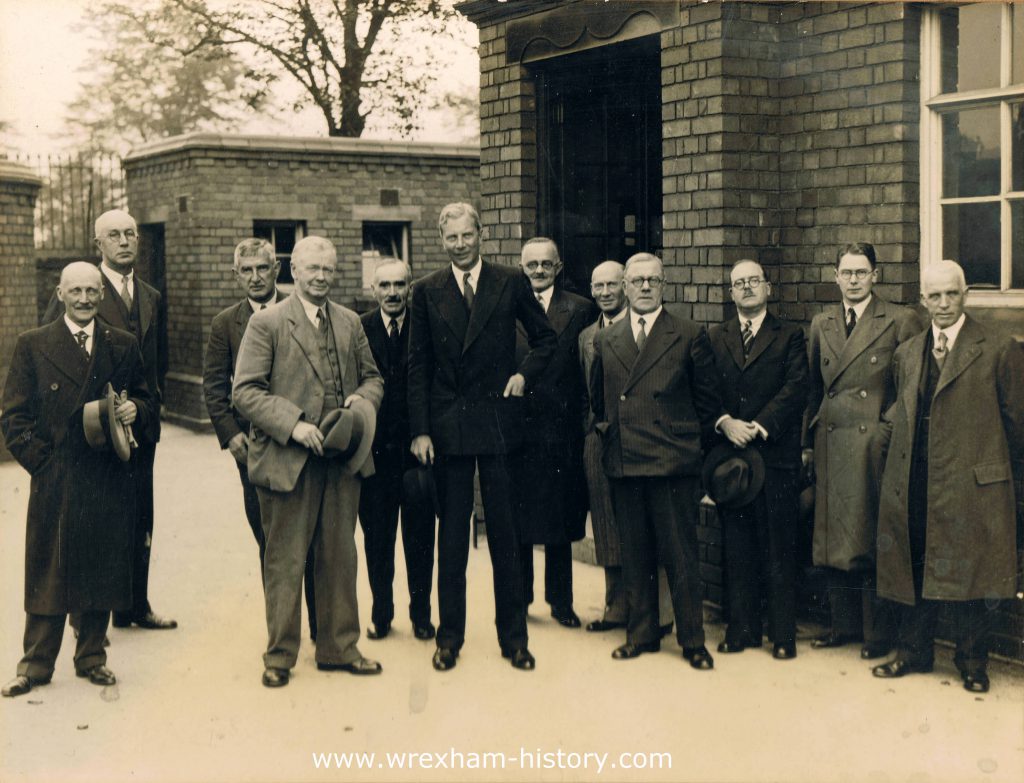 Clearly he was aware of the educational problems of Wrexham and was not going to allow even this happy occasion to pass without making his point. Mr. Samuel Moss, Liberal M.P. for the Denbigh East constituency, should have spoken but as the other speeches were so long he had to leave to catch a train! The day ended with a dinner organised by the Old Boys of the British School at which Charles Dodd was presented with an illuminated address and a gold watch.

The closure of the Brook Street School certainly marked the end of an era and the opening of the new Board School on New Year’s Day, 1901 symbolised the beginning of a new era and a new century. (The passing of the 1902 Education Act emphasised the fact.) The North Wales Guardian summed up the feelings of the School Board and the people of Wrexham and expressed the hopes embodied in the new school, ‘If from here goes forth a constant stream of boys and girls better fitted for the struggles of life, such boys as are likely to become manly men, such girls that have in them the germ of true womanliness, then will the expenditure be justified and Wrexham will reap a return infinitely in excess of the outlay’

The heading of the editorial comment of the Wrexham Advertiser of Saturday, 5 January 1901 crystallised the feeling of the town, ‘Wrexham’s New Treasure Houses’

Did your parents or grand parents attend Victoria School, Wrexham?

Wrexham Musical Theatre Society, the Beginnings of the society In March, 1942 at a public meeting held at The Hut, Bodhyfyd, Wrexham, the decision was taken to form The Wrexham Operatic Society in order to [more]

as reported in the Evening Leader 21/03/1977. Three women were rescued from a blaze at a Wrexham night dub after a dramatic telephone call to the club manager. The Wasps Club in Chester Street was [more]