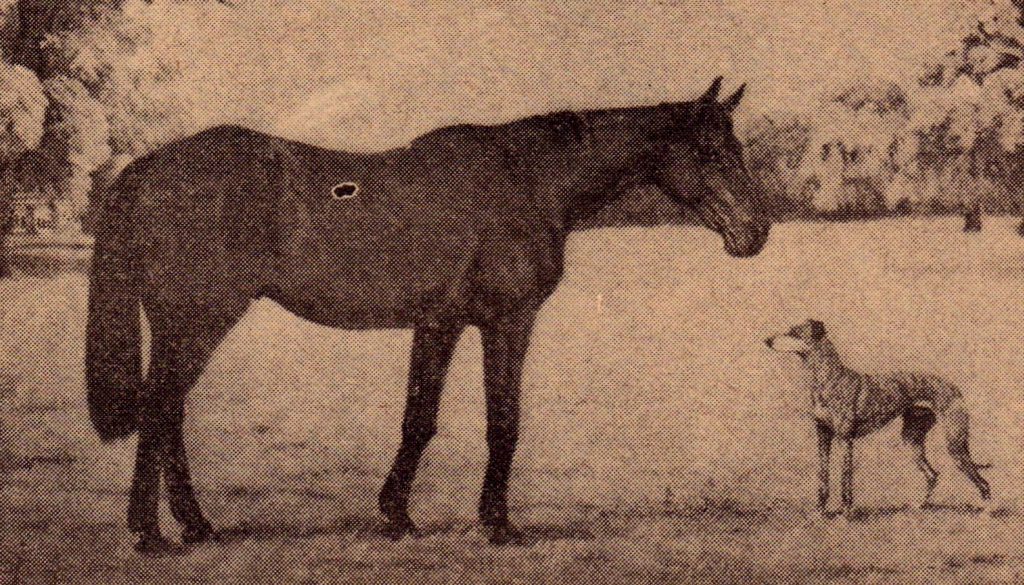 It was the first true Aintree Grand National since 1915, with the intermittent races being cancelled due to World War I and substituted by a ‘Racecourse Association Steeplechase’ and later a ‘War National Steeplechase’ at Gatwick Racecourse.

The 1919 National was won by the Poethlyn, ridden by Ernest Piggott. The pair had won an unofficial National at Gatwick in 1918 and on the back of this started 11/4 favourites, the shortest starting odds of any Grand National winner to date

POETHLYN, in the colours of Mrs Hugh Peel, of Bryn-y-Pys, Overton, won a wartime substitute National at Gatwick in 1918 at the age of eight, and was victorious in the Grand National at Aintree the following year, carrying the tremendous weight of 12st. 71b. No horse has carried that weigh to victory in the National since.

It was 5 lb. more than the weight carried by Golden Miller winner of five successive Cheltenham Gold Cups – when winning the 1934 Grand National. Poethlyn’s achievement was even more remarkable because many supporters of National Hunt racing consider that Golden Miller was a greater chaser than Arkle.

Major Hugh Peel bred Poethlyn in 1910 and gave him to Stud Groom Howard who later sold him to Mr Reg Parry, of the Black Lion Hotel, Ellesmere, for £5! Mr Parry then sold Poethlyn to Mr W. Davenport, of Whitchurch Farm, Alkington for £7 and he remained there until rising four years.

We are told that Poethlyn pulled the milk cart! Mr Davenport sold Poethlyn to Mrs Peel for £50 plus the first salmon Major Peel caught that year. George Goswell was the first trainer in charge of Poethlyn who later went to Poole’s stable at Lewes, Sussex, but it was Harry “Scratcher” Escott who trained Poethlyn to win the National ridden by Ernest Piggott, Lester’s grand-father.

Poethlyn, one of the greatest National winners of all time, died at the age of 25 years and is buried in Bryn-y-Pys Park, Overton-on-Dee. He is seen in the picture in a celebrated painting, which includes Bryn Truthful, a very successful greyhound, also owned by the Peel family.

This Wide load was travelling through Overton in 1979, having left Air Products in Acrefair to the port of Southampton. Source: NWN Media; Local Bygones. Total Page Visits: 3095 – Today Page Visits: 3

ROC Monitoring Post Overton Since its inception in 1925 as in integral part of the UK air defence system, the primary role of the Royal Observer Corps (ROC) was the recognition and identification of hostile [more]

My mother was a Red Cross volunteer stationed at the 129th General Hospital in Overton-on-Dee in 1945.  She wrote long, descriptive letters home, which I have donated to the WW2 US Medical Research Centre in [more]