The earliest reference to the premises I can find is an advert in the Rhos Herald of September 1899.  This informed us that The Maelor Restaurant and Temperance Hotel, High Street Rhos, provided High Class Confectionery, Dinner, Teas and Luncheons on shortest notice.  The proprietor was Miss E. A. Williams.  Her full name was Elizabeth Ann Williams and she was the twenty-year-old daughter of Mr. and Mrs. Benjamin Williams, who lived across the street in Mona House.

On Wednesday 29th November 1899, under the auspices of the Women’s Temperance Society, a social tea party was held in the Public Hall, Rhos.  Approximately one hundred people came to partake of the excellent feast which had been prepared by Miss Williams of Maelor Restaurant, High Street.  After the feast, thanks were expressed by Mrs. D. L. Price, Rhos and also by many ministers from the area.

The 1901 census shows us that Elizabeth Ann Williams of Mona House was a Confectioner and her 15-year-old sister Jane Ellen was her apprentice.  Elizabeth, of course, was the young lady previously described as the proprietor of the Maelor Restaurant.

In April 1909, the Maelor Restaurant, High Street, was under the management of a Miss R. Jones and was selling home-made confectionery, hot dinners daily and teas, &c.  Maelor House had a large room which was used for holding committee meetings, etc.

On the night of Tuesday 5th October 1909, a social evening was held at the Maelor Restaurant, Rhos, by the Johnstown Bachelors. Over thirty sat down to supper and afterwards a musical evening was held under the presidency of Mr. D. J. Griffiths.  Those taking part were: Messrs. David Davies, A. Williams, W. Campbell, H. Campbell, J. Jones, T. Sharpe, W. Price and E. Jones.  The usual votes of thanks were accorded.

In September 1910, the aforementioned Miss Jones prepared a repast for the members of the Bangor Students Smoker.  She was given a “noted college cheer” after supper and then the students promenaded the streets of Rhos, singing “rollicking college choruses” and stood outside the offices of the Rhos Herald to serenade them boisterously.  A representative of the students told a Herald reporter that a feature of their Smoker evening was an impersonation of a Rhos native at a football match; an impersonation that was hailed by a local man to be “perfect in every detail”.

In October 1910, The Maelor Restaurant, 39 High Street, Rhos was for Let.  Interestingly, applications were to be made to Mrs. B. Williams of Mona House.

Elizabeth Ann Williams’ father Benjamin had died in 1906 and his widow, Jane, was running the Mona Stores.  Elizabeth Ann appears to have relinquished her post as proprietor of Maelor Restaurant and by 1911 was working as a housekeeper for her mother in Mona House.  At this time, the Maelor Restaurant was being managed by 54-year-old Thomas Ceiriog Jones, a native of Llanarmon, who was also a Confectioner.  His wife, 50-year-old Emily (maiden name Roberts) was assisting in the business.  She too was from Llanarmon.

Also assisting was their son Edward Llewelyn Jones, a 29-year-old Confectioner from Llanarmon and his 27-year-old wife, Bessie Mabel Jones, from Flint.  Edward Llewelyn’s 21-year-old sister, Mabel Myfanwy Jones was assisting in the business.  Mabel had been born in Oswestry. There was also a 26-year-old domestic servant called Mary Philips, who was born in Rhos.  The entire household spoke Welsh and English.  We learn from the census that excluding the scullery, bathroom, warehouse and shop, the premises had seven rooms.  Thomas and Emily had been married for 30 years and had five children, two of whom had died, therefore one child was absent on the day of the census.  We know from other records that the absent family member was 27-year-old John A. Jones.

In 1891, Thomas Ceiriog Jones had been a Temperance House Keeper in Oswestry, which probably helped him to achieve his position as manager at the High Street Temperance Hotel (a.k.a. Maelor Restaurant).

Benjamin and Jane’s daughter, Jane Ellen married Frederick (Fred) Ellis in 1916 and at some stage they took over the Maelor Restaurant and lived on the premises.  Jane Williams’ obituary of 1924 referred to, “Mrs. Fred Ellis of Maelor Restaurant”.  Working at the restaurant was a young lady called Catherine (Katie) Edwards (1909-1993) who was to marry Caradawg Williams of Mona House in 1940.

On 5th July 1932, Caradawg Williams, Elizabeth Ann Williams, Frederick Ellis and Jane Ellen Ellis conveyed 22 square yards – part of the forecourt of 35 to 39 High Street – to the Denbighshire County Council.  39 High Street was the Maelor Restaurant, so this confirms that the Williams and Ellis family owned it.

Ron Hughes’ parents ran the Maelor Restaurant from 1955 to 1968, as tenants and also lived on the premises.  Ron explained the reason it was number 39 and so close to the beginning of High Street was that there had been a number of cottages running off at right angles to High Street.  “The building was owned by a man called Tunnah. I think Herbert and Ruby Tunnah. They lived in the house behind ours on Beech Avenue. I am not sure but I think he bought it himself in 1955 as an investment but I have no idea who had it before.  The wooden shop sign was removed by Ron Hughes’ Dad shortly after he took it over and the traffic had to be halted while it came down.  Ron’s Dad painted over the big sign on the brickwork as he could not get sponsorship from Hovis – which in any event was not his flour supplier.

It was only a restaurant / cafe for a short while as there was not really the trade and my parents did not want to compete with the ‘Milk Bar’ and open in the evenings. My father concentrated on what he did best – make cakes.”

Su Hallard remembers, “Mr. Hughes also used to run the local Scout group that met in the old station waiting rooms. We girls used to hang around there on Scout nights to catch site of the boys in their uniforms but all I remember is Mr. Hughes in his khaki shorts showing boney knees!!”

Su also remembers buying iced lollies from the Restaurant … “and if you found an R on the stick you could take the stick back and get a free lolly.  Ron Hughes knows the truth about the lollies because it was often his job to make them. He said they were made in batches of 24 (there being only 24 glass moulds). Out of each batch, three had the “R” on the stick. Ron’s Dad was strict about that. The “R” was burnt onto the stick with a brand that Ron’s father made, although there were on rare occasions a few presented for a free lolly that were forged with biro or pen. Orange was the popular variety but there were others – red mainly but Ron told me his Dad even did ‘Vimto’ ones which were quite popular. They were initially two old pence and Ron thinks that by the time the venture ended they were selling for as much as four old pence.

Ron told us, “I don’t think it has been mentioned – but it was always my understanding that at sometime in the history of the building it was called the ‘Temperance Rooms’. I am afraid that the name became a little inappropriate during our residency and certainly on the last night we were there, as my parents allowed me to have a party – knowing that we were moving. I am sure a lot of people would remember the party as I think most of Rhos gate-crashed including the local police. It was a good night — or so they tell me !!!”

When the lease finished in 1968, Mr. Hughes left and started a new business in Ruthin. The Landlord then rented out to a new (unknown) tenant. The new tenant opened it as a café and snack bar but didn’t stay for very long, so the landlord’s wife, Mrs. Tunnah, tried running the business, selling cakes and bread bought from elsewhere.  Ron Hughes remembers visiting Rhos once and seeing that Maelor House was being used as a food shop, but with a new tenant.  Susan Roberts remembers it having a coffee bar in its back rooms, “then in my teens it then became an upholsterers”.  A photo shows it as MEM Upholsterers and Ieuan Roberts explained that MEM was the initials of one of the partners; one of whom was called Merfyn. 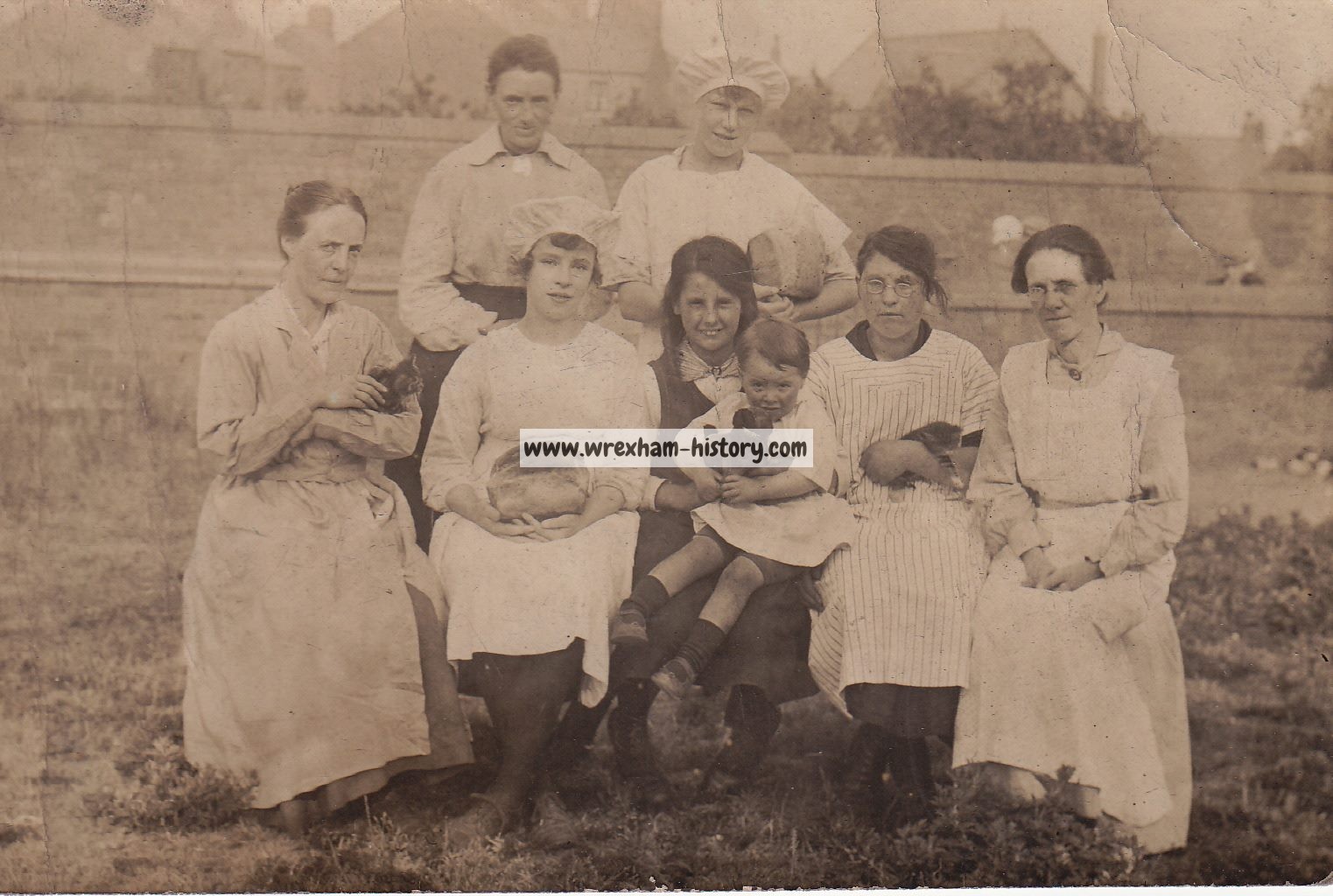 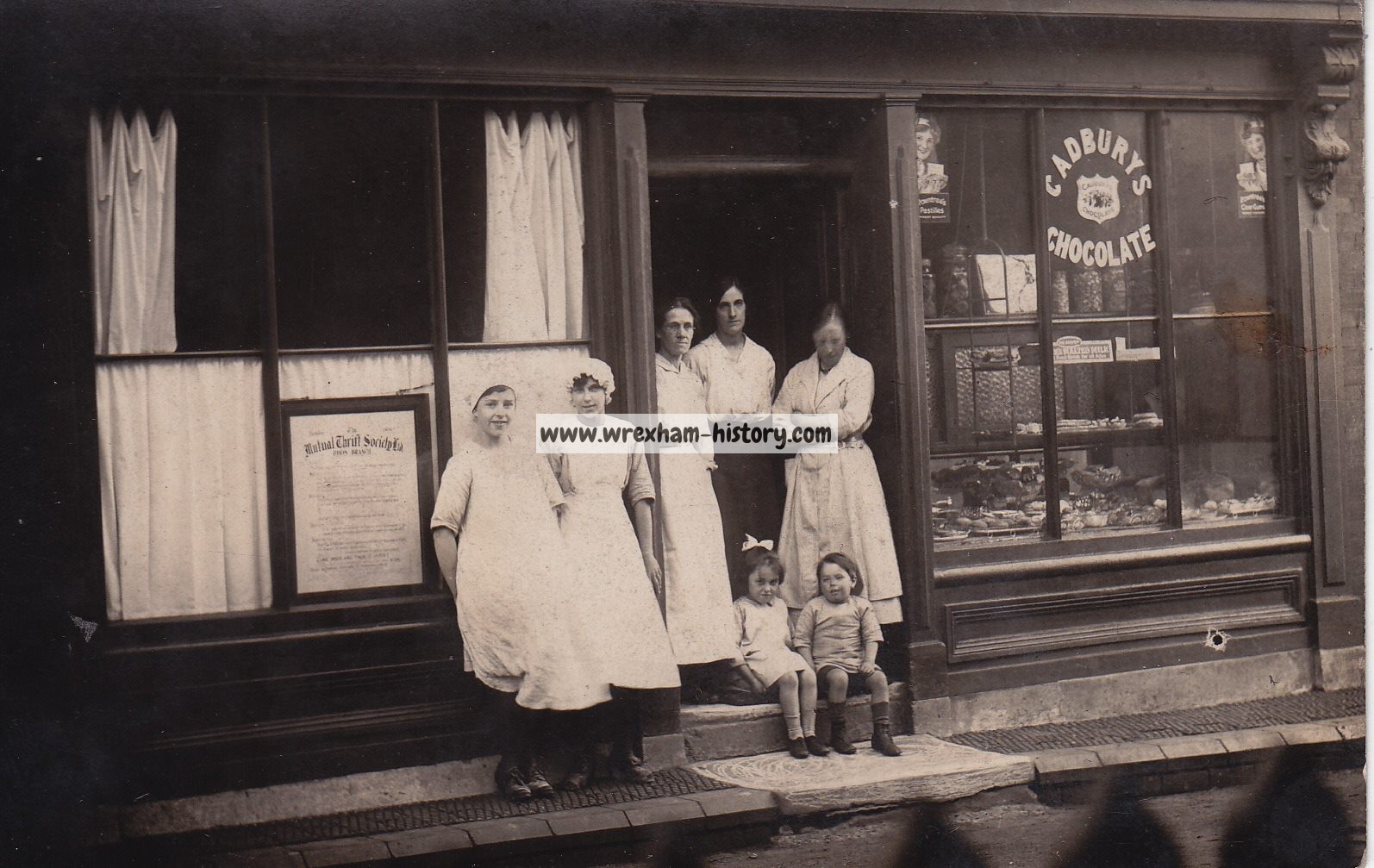 Pensioner remembers the night the Germans bombed his street LIFE in the village of Rhos was very different 70 years ago. Europe was at war and bombing raids by the Luftwaffe were frequent. In the [more]

Men of the 7 Battalion, R.W.F. Home Guard, E Company, Rhos, during the Second World War, many of whom took part in the operation try to extinguish the flames on Rhos Mountain caused by enemy [more]

The school attendance officer at the back was Arthur Augustus Roberts. The family were from Trefnant Nr. Rhyl. Arthur’s father William Roberts was the police sergeant in Rhos for a very long time. In 1893, [more]