Glamour of Hippodrome light will come to Tŷ Pawb

A shining cinematic light from Wrexham’s past will take pride of place at a new arts, markets and community facility.

A large Art Deco light which formerly hung from the ceiling of the old Hippodrome on Henblas Street will return to use at Tŷ Pawb, the new arts, markets and community development on Chester Street/Market Street.

The light was installed at the former Hippodrome 1961, and remained there until the closure of the cinema in 1997.

The light was preserved by Graham Lloyd and John Davies of Wrexham History, after it was rescued by members of the Wrexham FM/Community Media Wrexham radio volunteers, who were based in rooms above the old Hippodrome Cinema.

As custodians of the light, Mr Lloyd and Mr Davies wanted to see the Art Deco fixture returned to its former glory and displayed somewhere public in Wrexham.

It will be affixed to a new steel beam in the South Arcade of the former Peoples Market and displayed once the facility reopens as Tŷ Pawb. 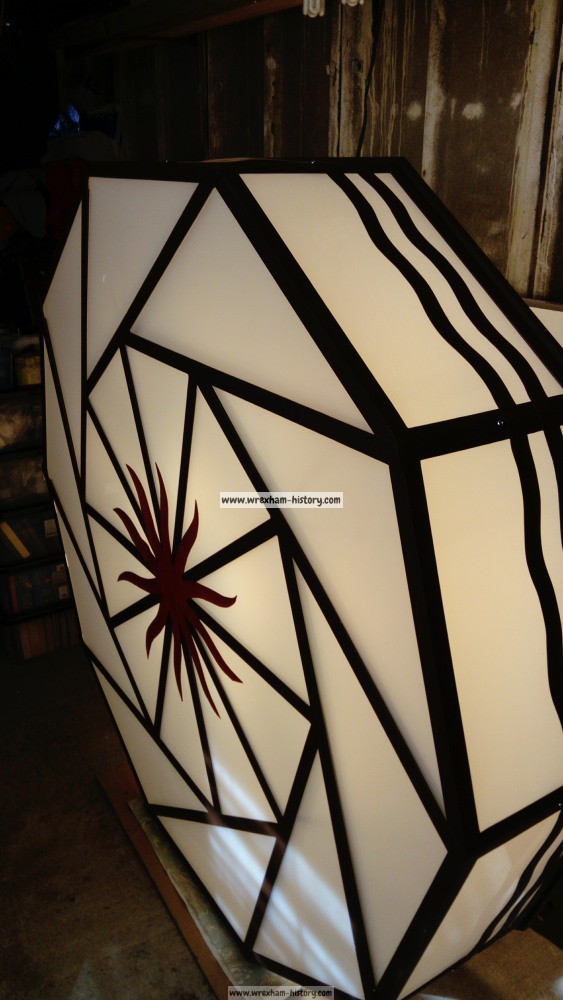 “Lot of people involved with the work”

Graham Lloyd, of Wrexham History, said: “We know that the old Hippodrome light was remembered very fondly by the people of Wrexham, and it reminds people of the glory days of the Hippodrome itself.

“As such, we were always very keen to get it restored and back up in a public place where the public would be able to see it – so we’re very, very pleased that we now have the chance to have it installed at Tŷ Pawb.

“A lot of people have been involved with this project and thanks is due to all of them – including Wrexham Sandblasting, RJS Electrical Services and the Wrexham Plastics Company, each of whom put work in to the restoration of the light.

“And many thanks as well to everyone at  Tŷ Pawb and Wrexham Council, who have allowed this work to come to fruition.”

Cllr Hugh Jones, Lead Member for Communities, Partnerships, Public Protection and Community Safety, said: “We’re very pleased to be able to confirm that the Art Deco light was formerly installed at the old Hippodrome will take pride of place in the South Mall as part of Tŷ Pawb.

“We wanted to pursue this as an option after we received strong feedback from the public, saying they wanted to see the old light moved to Tŷ Pawb.

“We know that a lot of people in Wrexham have very fond memories of the Hippodrome, and recall the light as one of its most prominent features – as such, we’re glad to be able to link Wrexham’s past with its future by having the light at Tŷ Pawb.

“I would also like to thank Mr Lloyd at Wrexham History for his help with this project and the restoration of the light.”

See more of the restoration here.

Howel Davies was born on 13 June 1846 in Wrexham, he was the son of Hugh Davies and Mary Jones.  In 1851 the family was in Queen Street, his father was a builder and timber [more]