An inquest was held at Wrexham on Tuesday before Coroner Mr. Kenrick, touching the death of John Brookes (32), a collier, who died at the Wrexham Infirmary as the result of injuries received whilst at work at Plas Power Colliery on January 7th. Mr. D. H. Mathews, H.M.I. of Mines, and G. J. Findlay, of the Plas Power Colliery, were present. James Brookes, a brother, identified the body, and said his brother was a married man and had four children.

Frank Walker said he was at work with Brookes at Plas Power Colliery on January 7th. He was working for Brookes, and was with him when the accident happened. He heard a fall and a shout, and the lights went out. He found that a piece of coal had fallen and caught Brookes. He had the coal off deceased. He worked in the dark, and eventually extricated him. He then went for assistance. The sprags at the place were properly set. They had sufficient timber. The coal was on Brooke’s head and body. Brookes was taken to the surface as quickly as possible. The coal was hard to get, and the accident was caused by a slip.

The Coroner commended witness for his brave conduct in working on in the dark, and extricating his mate. It was very plucky of Walker to get him out in the way he did. Robert Williams, the night overman, said he examined the place before the accident, and there was plenty of timber there then. Thomas Williams, foreman, said after the accident he examined the place, and found Brookes in a sitting position. Brookes told him he had been hurt, and he could see that he had been hurt about the head. In a few minutes Walker returned, and Brookes was removed to the bank. A piece of coal about two tons in weight had come down upon Brookes.

There was a parting in the coal which had caused it to come down. The coal came down through the slips.” There was no means of ascertaining beforehand that there were any slips. Dr. Furlong also gave evidence. The Coroner summed up, and said Brookes was an experienced man, and was always extremely careful. He did not think there was any negligence on his part or on the management. There had not been a fatal accident at Plas Power for three years and, when they remembered the number of men employed, and the thousands of tons of coal raised, a thousand tons a day it was marvellous that accidents had not been more frequent.

The jury returned a verdict of accidental death, and the Coroner and jury passed a vote of sympathy with the relatives. The jury suggested that telephonic communication from wicket to wicket might be provided if possible. Mr. Findlay, on behalf of the Colliery Company, said there were thirty-five miles of road in the mine. They provided electric signals, and there was one 120 yards from the place in question. Some discussion also took place as to the conduct of Walker, Mr. Findlay spoke very highly of his action. The jury asked the Coroner to recommend Walker to the proper quarters for a medal in recognition of his bravery. The Coroner said he would do this. 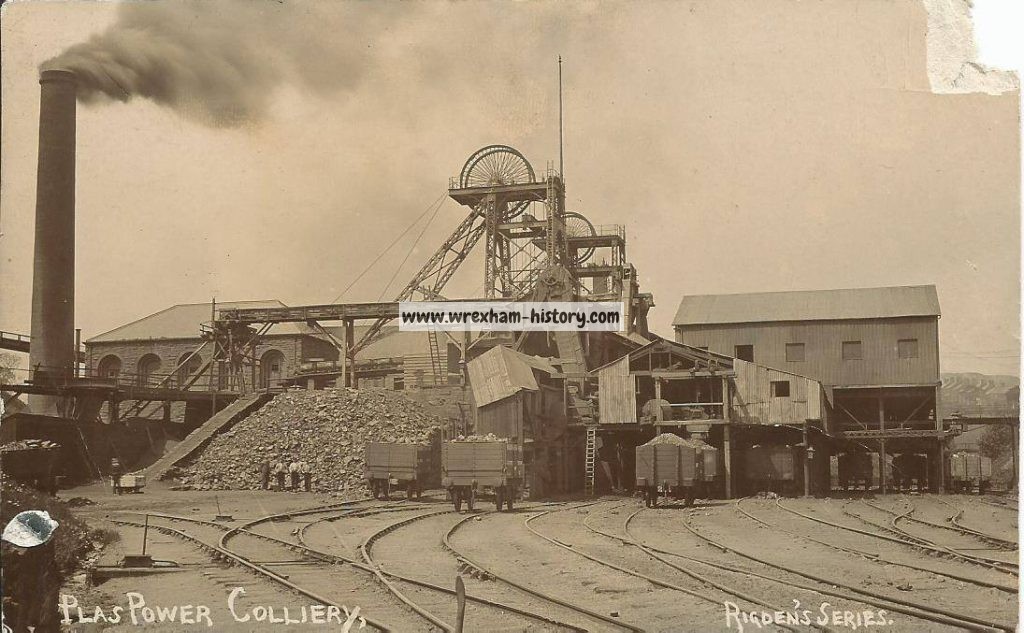 Black Park Colliery was believed to be one of the oldest collieries in North Wales, thought to date back to at least 1653. It extracted coal from the following seams; Main, Two Yard, Yard and [more]