A draper by any other name.

A draper by any other name. In Salisbury Square in London an obelisk can be found as a memorial to Robert Waithman who died in 1833.

Waithman was born in Wrexham in 1764 and became apprenticed to a linen draper in London. He became a freeman of the Framework Knitters’ Company in October 1787 and obtained the freedom of the city the following January.

In the ‘Poll for the City of London’ 1796 he is recorded as a Framework Knitter in Fleet Street, London.

The British Library has a trade card of his in their collection which they date to 1791.

But soon after opening his first shop (how soon is unclear) Waithman entered into a partnership with Charles Bristow and business boomed. In 1797 they were listed for the Sun Fire Office as having insurance for premises at 104 Fleet Street, 120 Newgate Street, 7 Holborn Hill, south end Fleet Market, and Winchmore Hill.

Another trade card dated 1799 shows their shop on the corner of Fleet Street and New Bridge Road. As a notice in the London Gazette of December 25, 1802, testifies, Waithman was the partner with the most financial clout, three-quarters as against a quarter for Bristow.

Very soon afterwards, the partnership seems to have been dissolved and Waithman went into a new partnership with Everington at roughly the same addresses.

The trade card dated 1803 again shows the 103-104 Fleet Street property, but now with Everington’s name instead of Bristow’s. The Sun Fire Office records for 1803 and 1804 list John Etherington alongside Waithman.

But in 1811 a partnership was dissolved between Robert Waithman and his son John on the one hand and William Everington on the other. Is there a mistake and are Etherington and Everington the same? And is John related to William? Whatever the exact details of the partnerships, by 1811 the business was solely in the hands of the Waithman family.

Robert Waithman was not just a linen draper, he also went into politics. He frequented a debating society at Founders’ Hall in Lothbury and became a liveryman of the Framework Knitters’ Company. In 1795, he was elected as a common councilman for the ward of Farringdon Without and took a stance against the war with France. He was involved in the founding of the Society of the Independent Livery of London and, in 1800, published a pamphlet War proved to be the real cause of the present scarcity and enormous high price, of every article of consumption, with the only radical remedies, which was directed against the injustice of the income tax and in which he demanded reform for a more equal society.

The Independent Livery became a lobbying group to be reckoned with in City politics, working for the people against high prices and taxes, and campaigning against war and for parliamentary reform. Waithman tried several times to get a seat in Parliament for London, but did not at first succeed. His background and lack of education spoke against him. “It was time to teach Mr Waithman that the government is not in the common hall, and that we are not to have a supreme council of war made up of the tradesmen of London”.

But, in 1818, he was voted as one of the four City representatives, defeating the Tory candidate, Sir William Curtis. Waithman’s speech of 1 July 1819 on parliamentary reform was published in 1823. Soon after his election, in July 1818, he was chosen as alderman for his ward of Farringdon Without, replacing the deceased Sir Charles Price, but failed to hold on to his parliamentary seat in 1820. He attained the post of sheriff of London and Middlesex in 1820–21, during which time he sided with the popular radicals in support of Queen Caroline. He also became Lord Mayor of London in 1823-1824, satirized by his political opponents in Maxims of Robert, Lord Waithman, Somewhile Chief Magistrate of London (1824).

Waithman always tried to strive for reform without becoming too radical, which resulted in an unfortunate middle position, where the Whigs thought he was too radical and the Radicals considered him too much of a Whig. And his background led to accusations of trying to use politics for his personal gain which he vehemently denied. His concern was the fairer distribution of power and wealth between the classes.(4) While some may claim he was just an upstart shopkeeper, he, although not always successful, did much to reform the political landscape in favour of the ordinary man in the street.

Waithman died at his house at 7 Woburn Place on 6 February 1833 and was buried in St. Bride’s on the 14th. His body was brought there from Guildhall in a cortège of twenty-seven carriages. Waithman Street in London was named in his honour and a subscription was raised by the St Bride’s Society to set up an obelisk.

The Morning Chronicle of 26 June 1833 reported that the day before “the first stone of the Waithman Obelisk was laid by Alderman Harmer … attended by the architect and the Secretary of the Haytor Granite Company, by whom it was constructed”.

The inscription seen on the pedestal of the obelisk was, according to the paper, also engraved on a sheet of lead which was deposited with a portrait of Waithman and a list of the subscribers in a hermetically sealed bottle which was placed in a cavity in the lower foundation stone. Is it still there?

The obelisk was originally erected at the southern end of Farringdon Street, opposite the Fleet Street shop, but it was relocated twice. The first time in 1951 to Bartholomew Close and in 1972 to it’s present position in Salisbury Square. And if negotiations had not broken off (reason unknown) the obelisk might have ended up in Wrexham Waithman’s birthplace.

After Robert’s death, the shop in Fleet Street was continued by his sons. A draper by any other name. 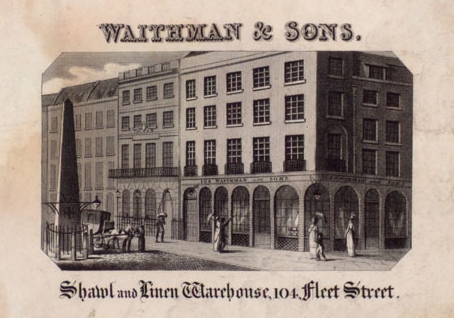 At 10.30pm, on the 10th January 1865, William Kendrick, aged 21 and George Price, a baker living in Wrexham were standing and talking in Bridge Street, Wrexham.  These two males were approached by Joseph Hughes, [more]

At seven o’clock, on Friday 2nd May 1873, William Bell, a shepherd, employed by David Jones, a butcher trading from Wrexham High Street, went to check on the flock of sheep kept in a field [more]