This essay is intended to stimulate an interest in the life of Dr. Caradog Roberts, one of Rhos’s musical heroes.  To set the scene, let us go back in time to Church Street, Rhosllannerchrugog and the home of John and Margaret Roberts.  John was a brickmaker and his wife was a dressmaker.  They had two young children, William Henry and Jane Ann. On 30th October 1878, Margaret gave birth to a son, Caradog, who is the subject of this essay.

Caradog’s musical talents showed themselves when he was very young and resulted in him winning prizes at various eisteddfodau.

In 1891 the family were living at Erw Gerrig, Rhosllannerchrugog.  In November 1892, 14-year-old Caradog won a prize at Bethlehem chapel’s fifth annual literary and competitive meeting, which was held at the Public Hall.  His prize was for answering questions on the history of David and Jonathan.  In 1894, when he was only sixteen years of age, Caradog Roberts was appointed organist of Mynydd Seion Congregational church, Ponciau, near Wrexham, a post which he held for nine years.

He had begun his working life as a pupil-teacher in the local elementary school, but became an apprentice carpenter with Jenkins and Jones of Johnstown.  There is a story which tells of how he was making an organ stool at Capel Mawr and Dr. Roland Rogers was practising the organ while Caradog worked on the stool.  When Dr. Rogers retired to the vestry, young Caradog jumped onto the new stool and played Guilmant’s grand fugue in D Major on the organ.  Impressed by what he heard, Dr. Rogers approached Mr. William Davies (tenor vocalist), who negotiated with Caradog’s parents and his employers, thus making it possible for him to relinquish his apprenticeship and take up musical training.  He went on to receive music lessons from Dan C. Owen of Rhos, Norton Bailey, Dr. J. C. Bridge (the organist of Chester Cathedral) and Herr Johannes Weingarter.

By 1901, Caradog’s father, John Roberts, had become a Foreman at the Brickworks.  His son William Henry was a Commercial Clerk and 22-year-old Caradog was a teacher of music.  The family were still living at Erw Gerrig.

In 1904, Caradog Roberts took up the post of organist for Bethlehem Chapel, in Hall Street, Rhos; a position he held until his death.

In 1905, aged 26, Caradog graduated in music, gaining a Bachelor of Music degree from Oxford.  In 1909 he achieved the distinction of Inter Mus. Doc.

By 1911 the Roberts family were living at Mount View, Church Street, Rhos.  John was retired by then and his wife Margaret worked from home as a dressmaker.   Their daughter Jane Ann had been married to Llewellyn Parry, a terra cotta worker, for six years and they had one child.  Jane looked after the Roberts family home.  Caradog was then aged 32, single and working from the family home as a music teacher.

Later in 1911, Caradog Roberts became the youngest Welshman and the first from North Wales to gain a Doctorate of Music from Oxford.

On 8th January 1912, Dr. Caradog Roberts was presented with his doctoral robes by the townspeople of Rhos.  During the 3rd Quarter of 1912 a marriage was registered between Caradog Roberts and 26-year-old Laura Pritchard of Rhos.  This must have been late December because in January 1913 the Musical Herald reported that Bethlehem Chapel Sunday Choir had presented him with “massive bronze figures on the occasion of his marriage”.

In 1913, Sir Frederic Cowen, an English pianist, conductor and composer, voiced the opinion that the Welsh lived only for competitions and hymn tunes and hardly ever sang anything that wasn’t composed by a Welshman.  Understandably, Caradog Roberts took exception to this and in an interview with a Rhos Herald reporter he was given his opportunity to vindicate Welsh singers.  Caradog pointed out that in Rhosllannerchrugog, during the previous seven years, the choirs had performed works by Rossini, Mendelssohn, Mozart, Dvorak and Elgar.  Caradog observed that the eisteddfod was in a sense losing ground to organ recitals.

He commented that the Welsh were indeed backward in instrumental music, but blamed this upon the fact that prior to 1864 there were no organs in Welsh chapels.  When asked of the musical future of Wales, Caradog said, “the hope of Wales lies in the establishment of a national school of music”.  He saw a time when classes would be arranged in towns and villages under the auspices of local governing bodies.  He felt this would bring music to the doors of the masses and bring about the day when Wales would “shine among the nations”.

Caradog Roberts performed throughout Wales as a conductor, judge and organist.  He was Director of Music at the University College of North Wales, Bangor from 1914 until 1920.

While adjudicating at an eisteddfod in Connah’s Quay in July 1914, Caradog witnessed a “startling scene” while the Connah’s Quay Mixed Choir were assembling on stage.  A platform had been erected in a marquee and a portion of the platform collapsed, sending several young ladies hurtling to the ground, to become entangled in a mass of planks.

A pianoforte fell and was jammed between some of the remaining planks.  Loud shrieks filled the air as the audience ran for safety to the front of the large marquee.

Eisteddfod officials, assisted by police officers, managed to rescue the ladies, some of whom had managed to escape by themselves.  A shocked and shaken choir reassembled later and were able to perform the test-piece, “Hymn to Music.”  Dr. Caradog Roberts was suitably impressed by their performance and highly complimented them as he presented them with their £8 prize.

On September 1st 1915, the Musical Herald published an essay by Dr. Caradog Roberts entitled, Effect of the War on British Music.  While expressing the opinion that the allies would not be beaten, Caradog pondered over the possibility and how it would affect music.  He spoke of how “a conquered nation reaches the highest point of spiritual enjoyment when it revels in the wail of the minor key”.  He cited the Welsh Nation as an example of this.

He went on to suggest that from the current depression and anxiety being experienced by the British Nation, a great and spiritual British power might emerge.  Caradog believe that up to about 1865 the Germans were the greatest musical and spiritual power in the world, but that their material success brought about their greatest spiritual defeat.

He concluded by asking the teachers, conductors and trainers to try to “infuse into the student a craving for a feeling in music, and British music will become a living art amongst us”.

During the 1st Quarter of 1917 the birth was registered of Stella Roberts, daughter of Caradog and Laura.  In September 1917, Caradog was busily organising a number of organ recitals to take place in various parts of North Wales.  The proceeds of those concerts were to be devoted to the funds in aid of the R.W.F. prisoners of war.

In July 1919, Dr. Caradog Roberts accepted the appointment of conductor of the National Musical Festival which was connected to the Royal National Eisteddfod due to be held in Barry in 1920.

Two years before his death, Caradog was at the Welsh Eisteddfod, held at Doncaster.  He was one of the adjudicators and not only praised the tenors, but went so far as to say that England was “fortunate in having so many fine choralists.”

Caradog died on 3rd March 1935, aged only 56.  On the day of his funeral, crowds of people gathered to pay their last respects.

A service was held at his home in Osborne Street and then there was a public service at Bethlehem Chapel (Capel Bychan) in Hall Street.  During this service the organ was closed as a mark of respect to the man who had spent his life playing it.

After the service, a vast crowd lined the roads as the horse-drawn hearse passed along Hall Street, Market Street and proceeded down Church Street to Rhos Cemetery.

Dr. Caradog Roberts is remembered as the composer of such well known hymn tunes as In Memorium and Louvain and of children’s hymns such as Vilda and Rachie and the popular anthem, The Lord Is My Shepherd. 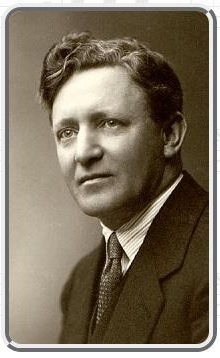 Memories of the Bulls Head, Rhos

A make shift sign “Buy Hafod Coal” written on the front of the coal truck which serviced the Rhos, Johnstown and Wrexham areas during the 1930s. Source: Original photograph NWNMedia; Local Bygones; Digitally repaired as [more]