In 1903 Tom Carrington established a printing business in Coedpoeth. It was situated at the rear of the Star Stores on the High Street (later called Hunters, and then became the Launderette).

Tom Carrington named the business Star Press. He later moved the business to the rear of 32 High Street.
He began his apprenticeship at the well known printing firm of that time, Hughes & Son of Caxton Place, Wrexham. Tom would walk from his home in Gwynfryn early on a Monday morning and lodge in Palmer Street, Wrexham for the duration of the week and then return to Gwynfryn after finishing work on Saturday lunchtime.

As well as being the village printer, Tom Carrington (who was born in 1881) was also an accomplished musician and composer. He was for 50 years organist at Rehoboth Chapel, Coedpoeth. He was the composer of some well-known Welsh Hymn tunes. One of the more famous ones entitled “Y Ddol.” He was sometimes referred to by his Bardic name “Pencerdd Gwynfryn”.

On Saturday, December 5th, 1914 he launched a weekly newspaper for Coedpoeth and District. It was predominantly Welsh and was titled “Cloch Maelor” (The Maelor Bell). It cost 1/2d – a half-penny in pre-decimal money. 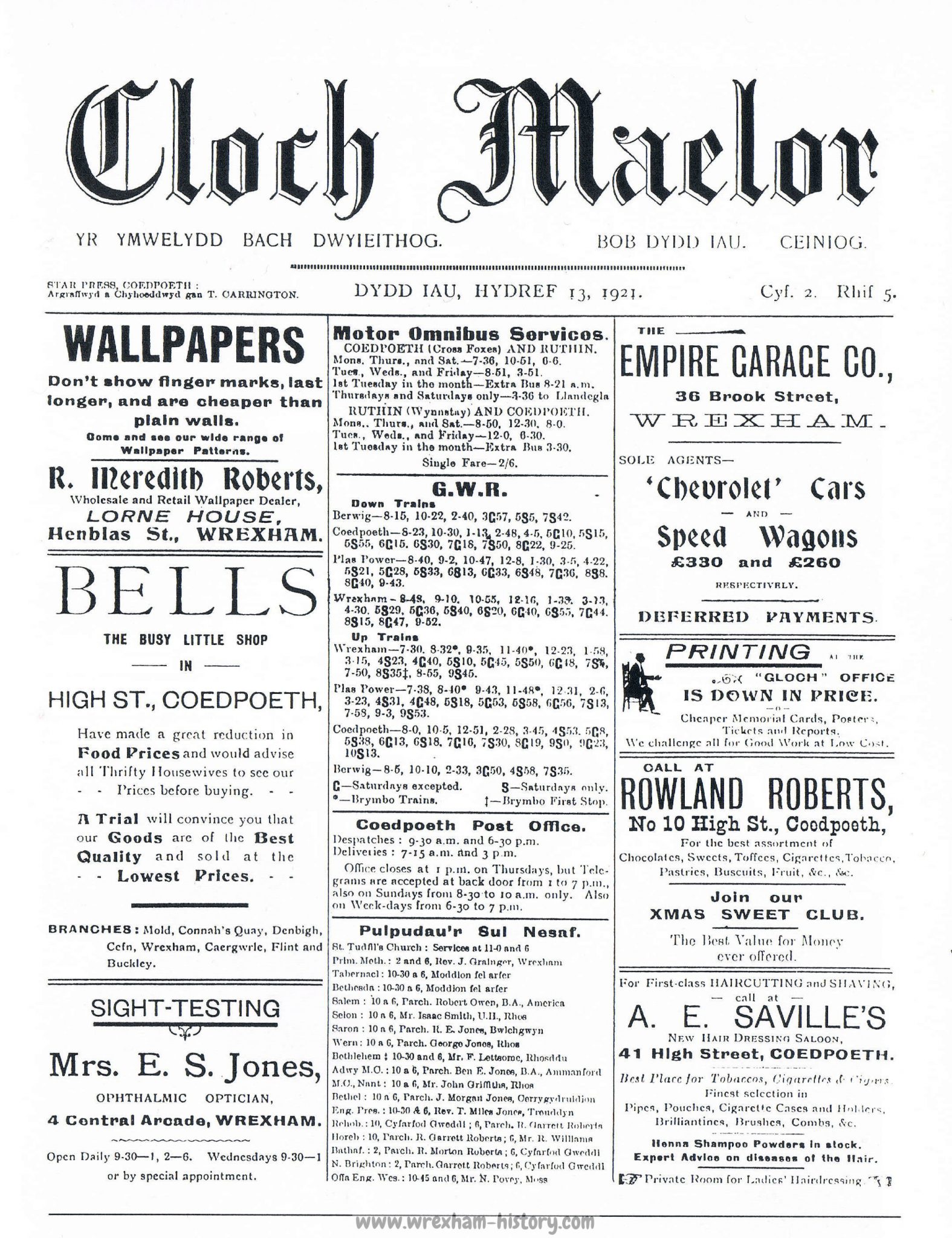 A well known character from Coedpoeth by the name of Windsor Oldfield helped Mr. Carrington by running errands and doing odd jobs, he was described by some people as a harmless person always happy to help out with small jobs. One of his jobs was to deliver the “Cloch Maelor” newspaper around the locality. One day Windsor was late arriving back from his deliveries. A search was launched and he was eventually found dead in an outlying district with his bundle of newspapers still tightly held in his arms.
Mr Carrington continued printing until his retirement in 1945. The name he used to begin his business “Star Press” continued for many years.

Source: Coedpoeth As it was.

Memories of Victoria School 1920s – Eric Hughes My formal education was received in its entirety at Victoria School so that any successes I have had must, in part, be attributed to the teaching I [more]

Official opening of War Memorial Hospital,Rhosddu Road, Wrexham, it was opened by HRH Prince Henry, Duke of Gloucester, on 9th June 1926. Wrexham people raised the money to build the Memorial Hospital between 1918 – [more]