I have written the following account of the Cambrian Brewery, Wrexham.  It is by no means intended to be the final word on the subject, so if anyone has any documents which might enlarge upon our knowledge I’d love to hear from you (Dave Edwards). 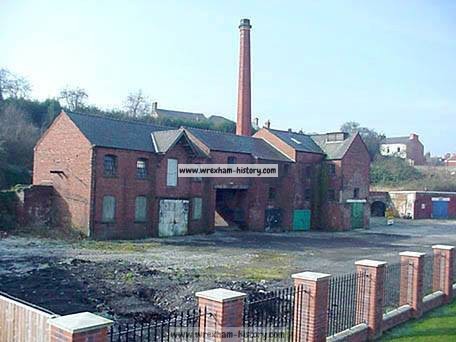 The Cambrian Brewery faced St Giles’ Church.  Brewing was central to the fortunes of Wrexham and its people and Joseph Clark of Clark & Orfords started brewing on the site in 1844. Peter Walker, brewer and later owner of the Willow Brewery, began his career by working for Mr. Joseph Clark at the Cambrian Brewery when he was about 17, which implies it was open around 1838.

In 1869 the owner, Mr. Joseph Clarke, after many years of successful business, signified his intention of retiring.  In September 1869 a sale took place at the Wynnstay Arms Hotel, Wrexham under the auctioneers Messrs. Cronin.  For sale were the Cambrian Brewery and two malt-kilns with land adjoining.  The purchaser was promised the option of taking a lease of the old established wine and spirit vaults in Hope Street at a price to be agreed on.  There were only two bidders; Mr. Peter Walker (owner of Willow Brewery, Wrexham) and Mr. Pierce of Bagillt, the latter of whom made the highest bid of £6,000.  Unfortunately for him, the reserved bid was £8,500 so no sale took place.

However, the Cambrian Brewery company’s fortunes escalated in 1874 under the dynamic William Sisson.  He seemed sure of his talents, saying that London and Birmingham only wanted Welsh water, not to drink, but in a desperate attempt to make ale as good as those of Wrexham. 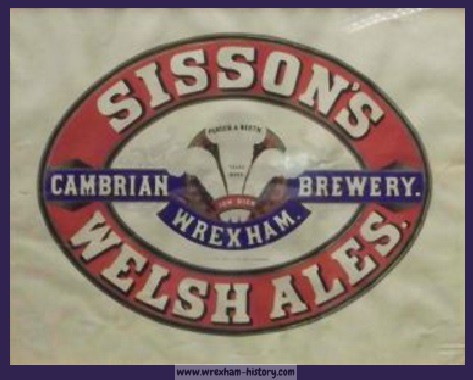 On Wednesday, 21st March 1888, a fully attended meeting of the North Wales Brewers’ Association was held at the office of Mr. Sisson, Cambrian Breweries.  Strong opinions were expressed concerning the proposed 20% rise in public house license duties, which the Local Government Bill was proposing. As Mr. Gladstone’s government had already increased the duties by 30%, it was felt all round that a further 20% would be “manifestly unjust”.  It was decided that they would contact the Parliamentary Committee of the Country Brewers’ Society with whom they were affiliated.

Mr. W. J. Sisson was present at a meeting of the North Wales Brewers’ Association on Saturday, 15th February 1890 at which they were protesting about the beer duty being too high.

In January 1892, the Unicorn Inn, Oswestry was offered to let by William J. Sisson of Cambrian Brewery, Wrexham.  The Inn was described as being fully licensed and having a large yard and stabling. 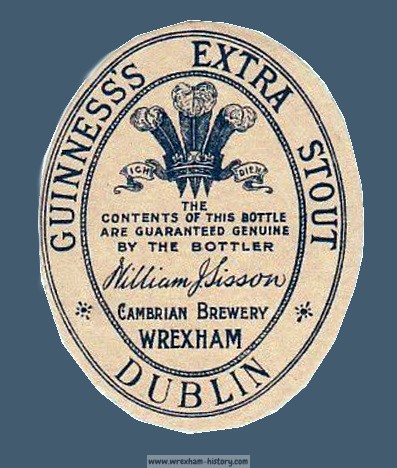 On the evening of Saturday, 2nd January 1904, the death took place of 75-year-old Mr. W. J. Sisson, at his residence, Plas Gwilym, Grove Road, Wrexham.  He had only been ill for a few days.  His funeral took place on Wednesday, 6th January 1904, at Gresford Churchyard.  Mr. Sisson, proprietor of the Cambrian Brewery, Wrexham, had also been the chairman of the Wrexham Waterworks Company for 25 years and was widely respected.  His eldest daughter was the wife of Mr. Ll. Hugh Jones, official receiver in Bankruptcy for Chester and North Wales.

In March it was made known that Mr. William J. Sisson had left in his will the sum of £58,095 10s 10d gross.  His will had been dated 28th August 1901 and probate was granted to his widow, Mrs. Cornelia Elizabeth Sisson and to his son Frank Sisson, a solicitor of Plas Gwilym.  His residence, Plas Gwilym, was left to Cornelia and she also received his household and personal effects and an immediate legacy of £400.  To his daughter Hilda he bequeathed £1,550 and to his daughter Clara £1,550.  He bequeathed £1,000 to Mabel Sisson; £1,450 to his daughter Gwynydd; £800 to his daughter Mary Charlotte; £550 to his son Frank and £750 to his son Norman.  To his manager, Thomas Buchanan Taylor he left £500.  He left an annuity of £750 to his wife Cornelia until a sum of £22,500 had been invested, when his wife would then receive the income therefrom for life.  Upon her decease this was to form part of his residual estate.  He also gave her power of appointment over a sum of £2,500.  The residue of Mr Sisson’s estate was left to his children in equal shares.

William’s fourth daughter, Miss Hilda Sisson, was married on Tuesday, 4th July 1905 to Mr. Guy Ll. Taylor, son of the late Rev. A. L. Taylor, who had been the headmaster of Ruabon Grammar School.  The wedding took place at Wrexham Parish Church.  The happy couple subsequently left for London, en route for Tasmania, where Mr. Taylor had received an appointment.

In 1910, William’s widow, Cornelia Elizabeth Sisson, died aged 77.  She was buried with her husband at All Saints Churchyard, Gresford.

In October 1916, Mr. Sisson of the Cambrian Brewery was advertising to let an old-established Llangollen inn, The Star, with a good yard and stabling.

I have found no more news items or adverts relating to Cambrian Brewery pubs from 1916 to their closure in 1922.  If anyone has any such documentation, I’d be interested to read it.

In February 2001, a consortium of local businessmen, led by the former managing director of the Wrexham Lager Brewery, David Priestley, unveiled the Phoenix Project. The consortium planned a £1million refurbishment of the historic Cambrian Brewery on St Giles Way, from where seven million pints of the beer would be brewed each year.  Wrexham Lager was currently brewed in Leeds and the consortium wished to bring production back to Wrexham.

Mr Priestley said: “We are extremely disappointed. We had been assured of brewing rights to the brand on a long-term lease. But Carlsberg-Tetley were not prepared to give us any influence over the brand or income from the sales.”  Mr Priestley said the group was not prepared to invest in an infrastructure without control of the brand and commitment from Carlsberg-Tetley to distribute it.

Mr Priestley added: “The trend among breweries is to let regional brands decline in favour of their core brands.  “Sales of Wrexham Lager, once one of the most popular beers in North Wales, have been severely reduced in favour of such brands.  “It’s the end of the line for the project and Wrexham Lager.”

Danish brewing giant Carlsberg-Tetley was accused of attempting to deliberately kill off Wrexham Lager.  Ken Thompson, of the North Wales Federation of Licensed Victuallers tried to encourage his members to withdraw all Carlsberg-Tetley products from their bars.

“The consortium decided not to progress with its intention to brew Wrexham Lager on a long-term lease arrangement but expressed an interest in buying the brand and maintaining Carlsberg-Tetley as the brewer.  On August 29, David Priestley agreed it was the consortium’s decision on whether or not to make an offer for the brand.”

“Carlsberg-Tetley has not received any further communication from the consortium about Wrexham Lager since then.”

Sadly, the brewery buildings and cellars were demolished in November 2003. The demise of the brewery and the nearby industrial heritage are a significant loss to the town’s heritage.

At trot through town to spend all the money. Hope Street, Wrexham. Visible to the right is the Talbot Inn and the retailers G. Day, Thomas Outfitters. Source: Material supplied by Emlyn Davies Total Page [more]

Running away from the Wrexham Workhouse 1857

Compared with today’s standards, the Victorian legal system can appear to be particularly harsh towards children living under difficult circumstances.  An example of this is one court case brought about due to four children running [more]