In ancient times, the rivers Severn and Dee separated Wales from England; but as a protection in the perpetual border frays, Offa, King of Mercia, made a dyke, which was probably in his time the real boundary between England and Wales, and to this day the Welsh language generally prevails on the Cambrian side of it, while it is seldom spoken by the dwellers on the English side. This dyke extended, it is said, from Prestatyn on the Dee to a little below Bristol.

The earliest notice known of the Hundred of Maelor is about the middle of the 6th century Bangor Monastery was then flourishing, though there were at that time perpetual conflicts between the Saxons, who were trying to win, and the Britons who were striving to save their country. About 540 A.D., Cunetha Whedig succeeded in right of his mother to the sovereignty of Cambria, afterwards his sons and grandsons sub-divided the country among them, giving their own names to them; one of thern was named Maelor and he was master of the two Maelors, Saesneg and Cymraig. At that time, the Britons too had a considerable portion of the country on the east side of the river Dee. About 567, Cunetha Whedig is said to have founded Oswestry, which was then called Llundain or Little London, until Oswald, King of Northumberland, built a cross there, which was said to be the first erected in England, which caused its name to be changed to Crossoswalt which soon became Oswestry.

Early in the 9th century, King Egbert, who united the seven kingdoms of the Saxons and became first sole monarch of England, won the city of Chester from the Welsh—a most valuable acquisition, as it is the key to North Wales, as the land adjoining it is a flat country. He seems not to have interfered with Maelor Saesneg because he had a Danish invasion to occupy his attention. In 887 we have again a notice of the Hundred of Maelor as Roderic the Great apportioned it to his third son Merfyn as a part of Powysland, Maelor Cymraig in Denbighshire and Maelor Saesneg in Flintshire, being a part of his inheritance. In after times this country was conquered by Harold for Edward the Confessor, whose son Athelstan laid the Welsh Princes under tribute. Their downfall as a nation may be dated from this and their territory was gradually diminished.

William the Conqueror, however, did not dispossess the Welsh of Flintshire although it was under his rule, and he joined nearly the whole of the county to the Palatinate of Chester. In the Domesday Book we find the whole of this country running from the estuary of the Dee as surveyed for the Conqueror under the name of Atiscross, and Maelor Saesneg is included in a Hundred called Dudestan.

Despite the heroic deeds of Llewelyn ap Gruffydd, the last Welsh Prince, the English power over Wales increased, and he was glad to conclude a treaty with Henry III. of England by which he was to retain the sovereignty of North Wales and Powys land, on payment of a large tribute; this arrangement, however, did not last long, and in 1282, after the overthrow of Llewelyn, the sovereignty of Wales was extinguished, and Edward I. by a statute made at Ruthlan, incorporated it with the crown of England.

It was Edward I. who divided England into counties. It seems strange that the king should not have enacted that Maelor Saesneg should continue according to Domesday survey, but ignoring the natural boundary which the Dee here presents, as the limit of the Principality, he restores it to Wales, and apportions it to the newly formed county of Flint. A story connecting English Maelor with the reign of Edward I. given at length by Powel and quoted by Nicholas, author of ” Annals and Antiquities of Wales,” has a special connection with my present purpose: “The Lord of Dinas Bran at this time was Gruffydh ap Madawe, Lord of Bromfield. who had made himself very obnoxious to his countrymen by his treachery in forsaking his native prince and siding with Henry III and Edward I.

This man died about 1270, leaving a widow, Emma, daughter of James, Lord Audley, and four sons, Madawe, Llewelyn, Gruffydh, and Owen. The king gave the wardship of Madawe, who had for his portion Bromfield and Yale, the castle of Dinas Bran with the reversion of Maelor Saesneg,” corresponding with Emral Flintshire, “the other side of the Dee from Wrexham Parish, while Maelor Cymraig was in that parish, after his mother’s death, to John, Earl of Warren; and granted the wardship of Llewelyn, to whose part Chirk and Manhendwy came, to Roger Mortimer, a grandson of Lord Mortimer, of Wigmore.” These guardians so guarded their wards that they never returned to their possessions. Pennant, quoting from the ” Bodleian,” says they were drowned under Holt Bridge; and Yorke, in the ” Royal Tribes,” says, ” As it might happen, the wards were missed and were no more found.” Then the guardians obtained the lands for themselves by charters from the king.

Powel’s account of the widow’s dowry and subsequent disposition of it, involves quite a different question. After stating the guardianship of the sons as above, it says that Gruffydd’s wife, having in her possession for her dowry Maelor Saesneg, Hopesdale and Moulsdale, with the presentation of Bangor Rectory, and seeing her sons disinherited and done away, the fourth dead without issue, and doubting lest Gruffydh, her only remaining child, should not continue long, conveyed the estate to her own kin, the Audleys, and from them it went to the house of Derby, who in after years sold some of it to Sir John Glynne, Sergeant-at-law.

The Salusbury pedigree book belonging to Sir W. W. Wynn says, ” Emma, daughter of Henry de Audley, as appears by the inquisition taken 13th July 1277, had for her jointure Maelor Saesneg because she was an Englishwoman, and her house of Emral was built for her.” How long Emma Audley was in possession of Emral Hall is uncertain, but it appears by an inquisition of 5 Edward I. that she was then dispossessed of all lands in both Maelors, and died at Overton in 1278, possibly in the old castle. The memory of Edward I.’s queen being hurried to Carnarvon Castle for her accouchement is still preserved in this parish by the Queen’s Ford over the river Elf, and at Overton by the Queen’s Bridge. Her son was created Prince of Wales and Earl of Chester.

In 1279 Richard de Puleston restores to the king all his lands and tenements in Worthenbury, having probably only held them for -two years, or possibly five, as there is a deed, 1284, speaking of the “foresta domini Rogeri de Puleston” at Willington. There seem to have been two parties at work, one trying to get Emral and the property attached to it for Richard, the other for Roger Puleston, but in the servant, gets it.

As the Puleston family figure a great deal in the history of this parish, it will be well to tell something of their antecedents. They were an old Shropshire family with possessions in Staffordshire. They owned the manor of Pillesdon, and took their name from it, as was then the custom.

Eudo de Pillesdon was living in 15 Henry II. Two of them were crusaders. Warrenis de Pillesden died on his way to Jerusalem in the time of Richard II. Jordan de Pillesdon had letters of protection from Henry III. ongoing to the Holy Land. The name of Pillesdon frequently occurs relating to those of Audley and L’Estrange, and it may have been owing to a friendship with the Audleys that de Pyllesdon was chosen to succeed Emma at Emral.

In the Salusbury book Puleston and Hanmer are mentioned as settlers in Maelor; probably all the other inhabitants were of British descent. In numberless old deeds and charters there is frequent mention of the de Puleston’s, who were in the reign of Edward I. warm partisans of the king. The Roger mentioned as owning a forest near Willington was the first Sir Roger who was called of Emral, and he was established there about 1282; he was in high favour with the king, who granted it to him.

Unfortunately, the original grant is lost, so that the exact date is not known. The earls of Derby we know retained a good deal of the gift which I have mentioned as made to them by Emma Audley, the presentation to Bangor Rectory, which included for about 300 years the chapel at Emral with the cure of souls attached.

The influence of the English knights (Puleston’s and Hanmers) seems in a great measure to have affected the nationality of this part of the Hundred of Maelor; probably before their coming the inhabitants were all Welsh, as to this day most of the fields bear Welsh names; but from this date the language, manners, and customs of the inhabitants are exactly like those of England, and so, too, for the most part are the names. The influx of Emma Audley, who had a sort of Regal State, and an English knight of good standing at the court of England with his followers, must have aided greatly the prosperity and probably the civilisation of Worthenbury and the surrounding district, and it would be of the greatest possible interest to know more of the inner life of these people, though I have no clue to it.

Edward I. did not take the eastern side of the river Dee in the Hundred of Maelor from Wales, and from his day to the time of Henry VHI. it was unchanged. That monarch, however, seems to have had a great desire to straighten his boundary lines for improving the local government of his kingdom. In 1583 a statute was passed “concerning the laws to be used in Wales,” by which was enacted that Oswestry, Whittington, Ellesmere, and various adjacent parts should henceforth be annexed to the County of Salop ; but he joined Hope and some portion of the south-eastern part of the county to this Hundred, and made it what it now is except in an ecclesiastical sense, as in 1849, soon after I became Rector of Worthenbury, the parishes of Bangor, Overton, Hanmer-with-Bronington, Threapwood, and Worthenbury were transferred by an Order in Council from the Diocese of Chester to that of St. Asaph.

Sources: The story of a quiet country parish, being gleanings of the history of Worthenbury, Flintshire by T. H. G. Puleston (1895); Wikipedia for image. 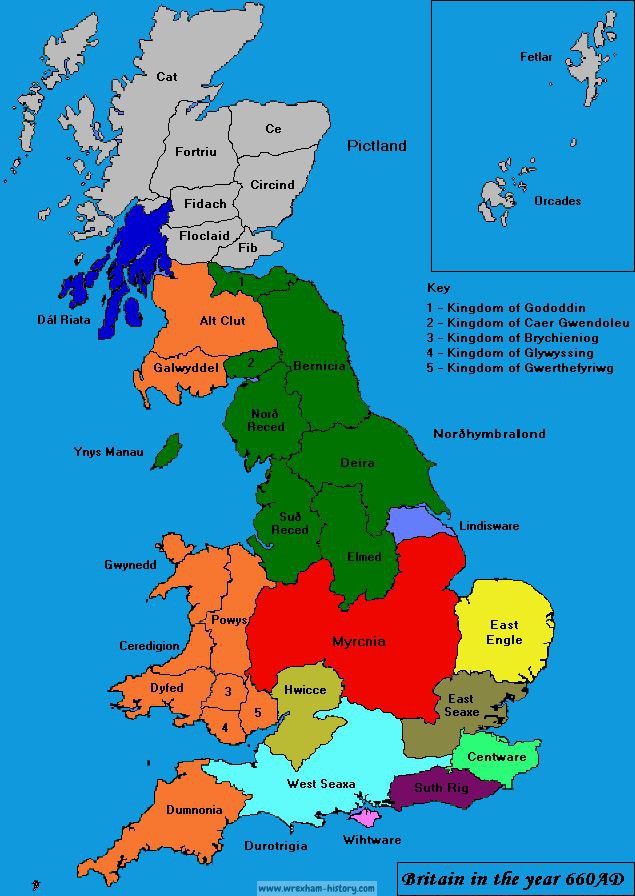