The inscription on this gravestone marks the grief of Wrexham people due to a railway disaster in faraway Oxfordshire.

Agnes Emma Barker was born in 1864 and was baptised at Brymbo on the 5th June 1864.  Agnes was the daughter of Joseph Edward Barker an accountant and his wife Jemima.  The family lived at Bersham Cottage, Lodge

At about Whitsun, 1874, Agnes went on a holiday to Plumstead where her elder sister, Annie was employed.  On Christmas Eve, the 24th December 1874, both Agnes and Annie travelled together on a train heading to Brymbo to spend Christmas with their family.

They took the 11:40am, Great Western Railway train departing from Oxford and travelling to Birmingham.  The train that they travelled on used two engine trains.  As the train approached an area between two bridges, the first spanning the River Cherwell and the other, the Oxford & Birmingham Canal, between Shipton-on-Cherwell and Hampton Gay a serious accident happened.  Damage occurred to the wheel of one of the carriages.  The damage to the carriage wheel caused a derailment and five train carriages went down an embankment.  The accident led to 34 fatalities and 69 injuries.  The scale of the disaster resulted in wide spread newspaper coverage of the accident.

As was the norm during this era, a mortuary was set-up at the Manor House, Hampton Guy.  A journalist from The Manchester Times described the scene at the Manor House and said that it “turned into a charnel house…dismembered, disfigured and discoloured corpses.”  It was at the Manor House that Joseph Edward Barker arrived to try to identify Agnes, his eleven-year-old daughter.  Additionally, Mr Brumer, the Oxford Coroner, also held the Coroner’s Inquest at Manor House.

Annie Barker survived the railway accident but suffered serious injuries, reported as two fractures to her arm and a fractured skull.  She eventually recovered enough to travel from Oxford to Brymbo.  She later recollected that during the accident she was thrown against a wall and large train carriages rolling towards her.

Agnes was buried at St Mary’s, Brymbo, on the 3rd January 1875.  The Great Western Railway Company provided a patent metallic coffin covered in blue cloth.  The funeral cortege was lead by Reverend Jones, the Vicar, and children from St Mary’s Sunday school, and her parents, relatives and other friends followed the hearse.  It was reported that on reaching the church the “Death March” was played on the church organ.

Despite the distance between Wrexham and the railway accident, surprisingly, other Wrexham people were involved.  John Thomas Trotter Pilkington, a 50-year-old civil engineer, and his son, John Augustus Pilkington, a 19-year-old Merchant Navy mid-shipman aboard the “City of Carthage,” from Chevet Hey, Stansty, Wrexham, were both killed in the railway accident.  Richard Low, a surgeon from Wrexham, identified both of them.

John Thomas Trotter Pilkington and John Augustus Pilkington were both buried at St Mary, Minera, on the 30th December 1874.  The Manchester Times poignantly reported, “the almost tragic circumstance of the flowers which had been procured for a sister’s and daughter’s marriage being used to deck the coffin of father & son.”  Their gravestone inscription reads, “In loving memory of John T. T. Pilkington of Chevet Hey, Wrexham, aged 50 and of his son Augustus, aged 19, who were both killed in the railway accident near Oxford on Christmas Eve 1874.”

William Charles Hughes from Ruabon also had the sad task of travelling to Hampton Guy to identify his brother, John Thomas Hughes and a cousin, John Edward Richards, whom his mother had adopted an early age after the death of his father.  John Thomas Hughes, aged about 27 years old, was a barrister, of 2 Middle Temple Lane, Temple, London.  John Edwards Richards, aged about 24 years old, was a surgeon, of 12 South Crossland Grove, Hackney, London.  They were travelling to Ruabon together for Christmas.  They were both buried at Brymbo on the 31st December 1874.

A further death linked to the Wrexham area was also reported in the press.  Mrs Walker was killed in the accident.  She was the wife of Mr Walker who was in service at Knolton, Overton-on-Dee.  The press remarked that she had considered travelling with their two children but fortunately abandoned the idea and travelled alone. 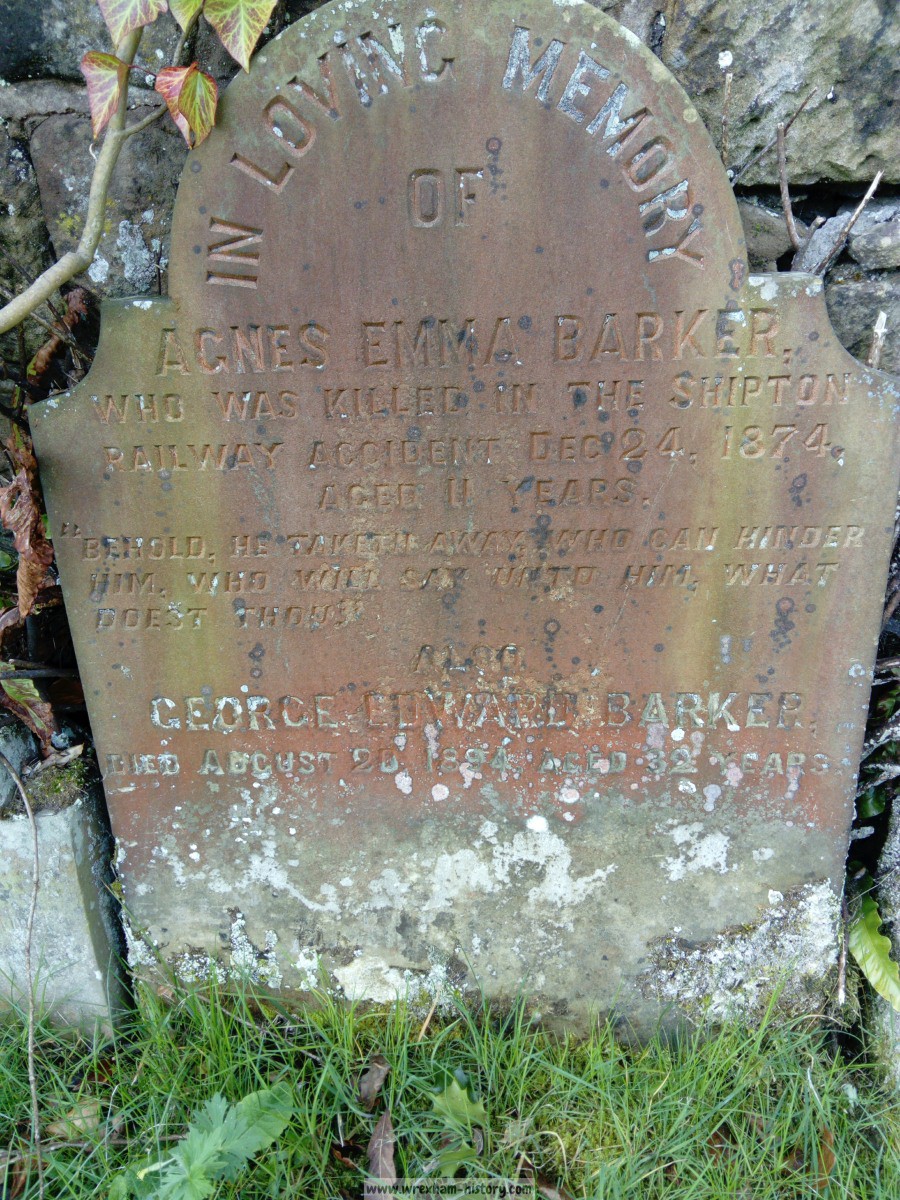 Full Gravestone Inscription: “In loving memory of Agnes Emma Barker, who was killed in the Shipton railway accident Dec 24 1874, aged 11 years. “Behold.  He taketh away who can hinder him who will say unto him, what doeso thou.”  Also George Edward Barker, died August ?  1894 aged 32 years.”

This 1908 postcard of the High Street in Brymbo, shows the Cooperative and the Miners Arms. Taken from the “Ultimate Series”. Source: Postcard in our collection. Total Page Visits: 532 – Today Page Visits: 1

In 1800 the abandonment of the Ellesmere Canal main line from Trevor via Wrexham to Chester was already being mooted, mainly because Flintshire and Deeside collieries had already reached tidal water via short tramways or [more]